Piracy and armed robbery on the world’s seas is persisting at levels close to those in 2014, despite reductions in the number of ships hijacked and crew captured, the International Chamber of Commerce (ICC) International Maritime Bureau’s (IMB) annual piracy report reveals. IMB’s Piracy Reporting Centre (IMB PRC) recorded 246 incidents in 2015, one more than in 2014. The number of vessels boarded rose 11 percent to 203, one ship was fired at, and a further 27 attacks were thwarted. Armed with guns or knives, pirates killed one seafarer and injured at least 14.

Spain’s Supreme Court has overturned the 2013 verdict of the Spanish court of first instance in La Coruna which had acquitted Capt Apostolos Mangouras, Master of the Prestige, of charges of criminal damage to the environment. In an unorthodox revision of the factual findings of the lower court, the appeal court has now ruled  that Capt Mangouras and the owner of the Prestige acted ‘recklessly’ in 2002 when the 81,000 dwt tanker and its 50,000 tonne fuel oil cargo were lost off Spain’s west coast. 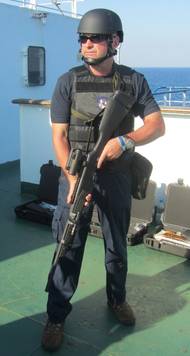 The latest report of a tanker hijack in Southeast Asia has prompted Dryad Maritime to issue an advisory to its shipping clients, on the basis that the crime follows a pattern, which has seen up to six such attacks, over the last nine months. The Company issued its advisory to maritime clients from its 24/7 Portsmouth, UK-based operations facility, explaining that the [Thai tankship] MT Orapin 4 laden with a fuel oil cargo, departed Singapore on 27th May 2014 and became the subject of a missing vessel alert the next day when attempts by her shipping company to contact her failed.