Canadian liquefied natural gas (LNG) provider FortisBC has joined SEA\LNG, a multi-sector industry coalition accelerating the widespread adoption of LNG as a marine fuel.Peter Keller, Chairman, SEA\LNG, said: “We’re pleased to welcome FortisBC to the SEA\LNG coalition. Our North American member network grows as the appetite for LNG as marine fuel expands across the globe.”FortisBC brings to the coalition nearly 45 years’ experience in LNG production in Western Canada. It owns and operates two LNG facilities on the west coast…

Over the years Vancouver, BC based Island Tug and Barge (ITB) has refurbished and repowered older vessels and completed new vessels. The company is currently working on its most ambitious and innovative project to date. In its Annacis Island Shipyard, located undercover in a pair of huge leased warehouses on the Fraser River, ITB is building two tugs that will be paired with two of its existing barges. The two boats are built with pins for use in an articulated tug and barge application.

“We don’t usually remove the heads at mid-life on the Cummins engines,” Randy Beckler, Shore Engineer for Seaspan Marine, explained in reference to the 2003 launched Seaspan Venture’s third like-for-like repower. The repower was completed in the first week of February 2016. The Seaspan Venture, like her sister the Seaspan Tempest, had a pair of Cummins KTA38 M0 engines when new builds. These engines were changed out at over 40,000 hours. In 2016, the second set of engines had around 42,000 hours.

The Transportation Safety Board of Canada (TSB) is deploying a team of investigators following the girding and sinking of the tug Sea Imp X in the North Arm of the Fraser River, British Columbia. The occurrence took place yesterday at approximately 20:00 PDT. The TSB will gather information and assess the occurrence. It is publishing selected data pertaining to accidents and reportable incidents from its Marine Safety Information System (MARSIS) for use by professionals and the public to advance transportation safety.

Catherwood Towing's owner, Ernie Catherwood, adds another tugboat to his 14-boat fleet that operates in and around Canada's Fraser River. The 39-year old boat was at a shipyard undergoing a scheduled Canadian Steamship Inspection. Ernie had marine surveyor Mark McAllister and his port engineer Trevor Sexton check the boat out, and they reported the boat sound with excellent 1/2-inch hull plating. But the old 12V149 Jimmies were tired, although their big Lufkin gears had recently been rebuilt and were in good shape.

Vital access channels in the Fraser River in Steveston & Ladner will be kept navigable by a US$ 10-million joint dredging contract. Economic activity in the area will be facilitated as a result of unprecedented collaborative work bringing together a $10 million joint commitment by Port Metro Vancouver, the Department of Fisheries and Oceans, the B.C. Ministry of Transportation and Infrastructure, the Corporation of Delta, and the City of Richmond. "Providing clear, safe, local navigation channels is enormously important to our communities… 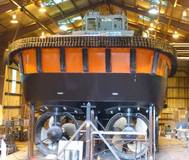 Samson Tug Boats Inc. launch the 'Kootenay', a BC-locally built tugboat for operations on the Fraser Fiver. Not only is she a local design – she is locally built. The 5,000hp tug, designed by AG McIlwain, was launched from the North Vancouver shores at ABD Shipyards. While it is not uncommon to find 5,000hp tugs in harbours across the globe, the Kootenay is remarkable in that she is less than 20 metres long. Other tugs of similar horsepower and performance are much larger and are not nearly as nimble.