Peel Ports, Britain's second largest group of ports, has expanded its proposition at London Medway with a GBP5.5million investment to replace the Royal Bridge Pontoon.The upgrade work includes a new 12m wide, 45m across ramp, which will allow larger stern ramp RoRo vessels to berth at the port and increase the overall capacity for throughput.It comes as new opportunities in the unaccompanied freight and automotive sectors brings new customers to the port, with the facilities able to support a higher volume of larger vessels.The forestry industry…

The Port of Kiel has begun the partial demolition of a former grain storage facility as part of a plan to completely restructure the access area to the Ostuferhafen. The demolition along with the integration of adjacent areas will free up 2.8 hectares in the port access area on which expanded hard standing space can be created for trucks, trailers and cars. So far, separated pre stowage sectors can now be combined outside the ISPS-zone.Dr. Dirk Claus, Managing Director of the Port of Kiel (SEEHAFEN KIEL GmbH & Co.

Calgary-based natural gas, electrical and real estate giant ATCO is getting into the transportation business after buying a 40-per-cent stake in a South American port operator Neltume Ports for about CAD$450 million (USD$340 million).Neltume Ports, a subsidiary of Ultramar, operates in 16 port facilities and three stevedoring businesses primarily located in Chile and Uruguay. “This acquisition represents an important milestone in the execution of ATCO’s long-term strategy to diversify… 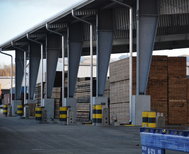 Another warehouse for Russian forestry products was inaugurated in the Ostuferhafen on Tuesday January 9th. The new Shed 12 was built inside just six months and represents an investment of € 1.5 million ($1.78 mln). The Managing Director of the Port of Kiel  (SEEHAFEN KIEL GmbH & Co. KG) Dr Dirk Claus said “We are investing in our trade relations with Russia and want to further cement our co-operative partnership with Jacob Jürgensen Wood GmbH.” The Hamburg-based trading company has signed a long-term rental contract for Shed 12 with the port.

The Port of London Authority (PLA) has broken ground for the construction of a new radar tower in Northfleet, Kent, as part of the 18-strong radar network it operates, overseeing safe navigation on the UK’s busiest waterway. The PLA is investing £1 million in replacing the existing Northfleet radar, located on Tarmac’s riverside office building, with a new 50-meter tall tower that will house the latest, energy efficient system. Tarmac’s Northfleet site is ideally located, offering excellent line of sight along two busy reaches of the Thames…

Port Metro Vancouver issued an announcement welcoming news of the signing of the Canada-Korea Free Trade Agreement yesterday in Ottawa. The agreement will significantly boost Canada’s trade with South Korea, as well as provide strategic access for the Canadian import and export market to a key gateway to the wider Asia-Pacific region. “This is a historic agreement,” said Robin Silvester, President and CEO, Port Metro Vancouver. “South Korea is the port’s third-largest trading market, and an important trade partner for Canada in Asia.