Qatari shipping and maritime company Qatar Gas Transport Company (Nakilat) reported a 10.5% year-on-year increase in net profit to QR728mn (USD 200 million) in the first nine months of this year.Nakilat, which has the largest LNG shipping fleet in the world, comprising 69 vessels, said in a press note that its positive financial performance can be primarily attributed to better operational performance in managing its liquefied natural gas (LNG) and liquefied petroleum gas (LPG)… 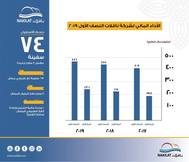 Nakilat said for the first half of the year ended June 30, 2019 that it achieved a net profit of $130 million compared to $122 million during the same period in 2018, an increase of 7%.Nakilat’s financial performance is driven by the acquisition of two additional Liquefied Natural Gas (LNG) carriers and one Floating Storage Regasification Unit (FSRU) in 2018 is among the main attributes to the positive financial results, as well as the increased volume of projects at Nakilat’s…

Qatar Gas Transport Company (Nakilat), a shipping and maritime company with the world's largest LNG shipping fleet, reported a 9 percent increase in profit for the first quarter of this year ended March 31, 2019.Nakilat reported a net profit of 236 million Qatari Riyals ($64.8 million) which compares to 217 million Qatari Riyals reported in the corresponding quarter in 2018."This increase was mainly due to the acquisitions of two Liquefied Natural Gas (LNG) carriers and one Floating Storage Regasification Unit (FSRU) in 2018, and higher volume of projects at Nakilat’s ship repair facility.

Qatar Gas Transport Company (Nakilat)  has reported about 8.5% year-on-year increase in net profit to QR659mn (USD 181 million) during January-September this year."Nakilat’s stronger performance is a result of the company’s successful expansion, which is attributed to its strategic long-term plan to diversify and seek business opportunities with minimal risk, as well as through effective cost optimisation initiatives across its integrated operations," said a press release from…

Cosco (Qidong) Shipyard Co, a subsidiary of Cosco Corp's 51 per cent subsidiary Cosco Shipyard Group Co, has entered into an agreement with a European buyer for the construction of the floating storage regasification unit (FSRU) module. Cosco Corp did not identify the European buyer. COSCO Qidong and the European buyer have agreed to keep the contract prices confidential. Delivery of the module is scheduled for the first quarter of 2018. A press statement from the company said that brring any unforeseen circumstances…

Japanese shipbuilder Mitsui Engineering and Shipbuilding (MES) has bought 99.36% of the outstanding ordinary shares in German designer and manufacturer of gas tanks and gas handling systems TGE Marine AG to expand its foothold within the market for medium sized multi-gas carriers. MES acquired 1,209,489 ordinary shares in TGE from Caledonia Investments plc, Gasfin Investment S.A. and Dr. Küver GbR, the partnership belonging to the CEO of TGE, for a total consideration of approximately around JPY 22 billion (EUR 164 million).

Even as world energy prices continue to maintain low pricing levels, offshore contracts are there to be won. Keppel Offshore & Marine Ltd has secured a Floating Production Storage and Offloading (FPSO) conversion contract as well as three repair, upgrade and modification contracts worth a total of about S$125 million. The FPSO conversion project Keppel Shipyard will be undertaking is for Armada Madura EPC Limited, a joint venture between long-standing customer Bumi Armada Berhad (Bumi Armada) and Shapoorji Pallonji Group (Shapoorji Pallonji).

Today’s hottest commodity – on land, at sea and in your bunker tanks – has a rich history and an even brighter future. LNG was first transported in 1959 from Lake Charles, LA to the United Kingdom. This voyage demonstrated the feasibility of waterborne transportation of LNG as a tradable commodity. In the 1960’s and 1970’s, three ‘large-scale’ liquefaction plants were built around the Mediterranean basin creating an LNG ‘trade’ between North Africa, the United Kingdom and Western Europe.

BW Maritime inks contract with Samsung Heavy Industries for BW’s first Liquefied Natural Gas Floating Storage Regasification Unit (LNG-FSRU). Expected to be delivered in 2015, it will be the latest addition to BW's fleet of 16 LNG carriers, building on and increasing its existing LNG expertise. This vessel and floating terminal will be able to receive and convert LNG into its gaseous form for offloading via pipelines, to gas facilities on-shore. BW is focused on its vision to be the leading brand in energy transportation…