Swiss container shipping company Mediterranean Shipping Company (MSC) paid $630,625 in penalties to the California Air Resources Board (CARB) for violating the Ocean-Going Vessel At-Berth Regulation.According to CARB, the violations were discovered during a routine audit of the company’s 2014 visits to the Port of Oakland and the twin ports of Los Angeles and Long Beach.The investigation by CARB revealed more than 2500 violations for both the Oakland and LA/LB fleets for failing…

State-backed shipbuilder CSBC Corporation, Taiwan has launched two domestically developed and constructed vessels in the southern Taiwan port city of Kaohsiung, reports Taiwan Today. YM Window and YM Width are 368 meters long, 51 meters wide and can carry 14,198, 20-foot equivalent units (TEUs) of containers. A 40-foot container—the most commonly used size—is around two TEUs. CSBC Chairman Lai Sun-quae said the vessels are a significant step up from the company’s last batch of 10 container ships produced from 2011 to 2015 that could carry around 8,000 TEUs. 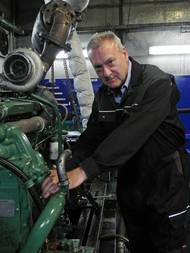 Marine diesel engines specialist Royston announced that appointment of Shaun Whitley as its new workshop manager at the company’s Tyneside-based engineering center. At Royston, Whitley will have full responsibility for the operation and management of the company’s diesel engine workshop facility and company’s engineering team. His role includes the project management of all scheduling of engine, turbocharger and fuel injection refurbishment work schedules, as well as responsibility for all quality control and compliance with OEM technical standards.

The judges have extending the deadline to submit entries for the 2015 SHIPPINGInsight Award from Aug. 15 to Sept. 15 to give more time for companies to participate. The annual SHIPPINGInsight Award recognizes a ship operating company and its technology partners for a successful project that advances the state-of-the-art in ship and fleet optimization. A panel of independent judges will review entries and select the winner. The award will be presented at a gala luncheon Oct. 13 at the SHIPPINGInsight 2015 Fleet Optimization Conference & Exhibition in Stamford, Conn.

Entries are now being accepted for the 2015 SHIPPINGInsight Award, which will be presented at the SHIPPINGInsight Fleet Optimization Conference & Exhibition, Oct. 13 in Stamford, Conn. The annual award honors a ship operating company and its technology partners for the successful implementation of an innovative technology or initiative that advances the state-of-the-art in ship and fleet optimization. A panel of independent judges will review entries and select the winner. The award will be presented at a gala awards luncheon on the opening day of the conference.

Damen delivers silent in operation Research Vessel ‘Simon Stevin’ to DAB Vloot, the Flemish Government fleet operator. The RV 3609 was jointly designed by Damen Shipyards Gorinchem and VLIZ, the Flemish Institute for the Sea. While hull and hot works were built at Damen Shipyards Galati (Romania), the outfitting was done by Maaskant Shipyards Stellendam (The Netherlands). The ‘Simon Stevin’ will be used offshore for scientific research on climate change, sustainable fishing, energy production at sea and for educational purposes.