The Ports, Customs and Free Zone Corporation (PCFC), in cooperation with Dubai Maritime City Authority (DMCA), have launched the Marine Agency to oversee wooden dhow ships and regulate all their activities while they’re in Dubai waters. The agency is an organizational unit managed by PCFC and works according to regulations in coordination with the competent government authorities. The move is part of PCFC’s constant efforts to strengthen Dubai’s trade environment and maintain…

The U.S Coast Guard's Office of Investigations and Casualty Analysis has issued a safety alert seeking to raise awareness regarding federal safety requirements for vessels carrying any paying passengers onboard a vessel on navigable U.S. waters. Picture the following scenario: The sea bass are running and your friend has a friend who can take you and another person fishing for a reasonable fee. He owns a boat that is ideal for fishing. You have a great day on the water, catch plenty of fish, and begin to return at dusk.

ClassNK has informed that Six countries viz. During the campaign period, the fire safety plan, fire control measures, drills, crew awareness and other applicable documentation etc. will be verified in more detail. The purpose of the 6 Maritime Authorities of the Riyadh Memorandum of Understanding (RMoU) launching the Concentrated Inspection Campaign (CIC) is to ensure compliance with SOLAS Chapter II-2 and the International Code for Fire Safety Systems on board ships. This inspection campaign will be held for three months, commencing from October 1st, 2014 and ending on December 31st, 2014.

The 6 Maritime Authorities of the Riyadh Memorandum of Understanding (RMoU) on Port State Control will launch a Concentrated Inspection Campaign (CIC) with the purpose of ensuring compliance with SOLAS Chapter II-2 and the International Code for Fire Safety Systems on board ships. This inspection campaign will be held for three months, commencing from October 1st, 2014 and ending on December 31st, 2014. * To raise awareness of fire safety related issues. In practice, the CIC will mean that during a regular port State control inspection conducted within the RMoU region…

Lloyd’s Register (LR) has a longstanding ‘heightened attention’ initiative where surveyors attending on board LR classed ships give increased attention to areas where the most common PSC deficiencies are identified. LR announced it has decided to continue this heightened attention initiative for a further year. LR’s analysis of PSC detentions shows that ships less than five years old are now more likely to be inspected and detained than before – therefore, the initiative will now apply to ships of all ages. fire safety, fire detection, firefighting equipment and appliances (e.g.

Salvage Response under OPA 90: Non-Tankers are Next

Maritime casualties have always been tackled by a relatively small, egotistical, passionate and intrepid group of mariners called “salvors.”  Salvage as history knows it, however, may be taking a sharp turn as a result of the new game rules being injected by the Oil Pollution Act of 1990 (OPA 90). Back in 2008 the USCG issued the tanker final rule for salvage and marine firefighting (SMFF) under the Oil Pollution Act of 1990. This rule primarily requires tank ships and barges… 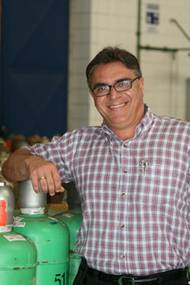 Wilhelmsen Ships Service (WSS) annonced plans to expand in South America to serve the growing cruise and offshore sectors. Prior to this month’s Cruise Shipping Miami, Area Director Henrique Schlaepfer said: “South America continues to be an area of concentrated investment for WSS. Over the last year we have put in place a new management team with responsibility for almost 200 employees, operating in key positions in Brazil, Colombia, Chile and Argentina”. In sharp contrast to its presence within the region less than four years ago…

Personnel from the U.S. Coast Guard and the U.S. Department of the Interior’s Bureau of Safety and Environmental Enforcement completed a review of the mobile offshore drilling unit Scarabeo 9, Monday, off the coast of Trinidad and Tobago. The review followed an invitation from the vessel’s operator, Repsol. While aboard the Scarabeo 9, personnel reviewed vessel construction, drilling equipment, and safety systems – including lifesaving and firefighting equipment, emergency generators…

Resolve Marine Group and T&T Bisso have announced their coalition for Marine Firefighting services in U.S. waters. This agreement combines both companies’ extensive firefighting infrastructure to produce overlapping coverage and higher volume firefighting capacity throughout the U.S. This coalition was crafted specifically to help tank vessel operators fully comply with the new Oil Pollution Act of 1990 regulations that will be effective on February 22, 2011. The regulations require that all tanker and tank barge owners operating in U.S.

RESOLVE Marine Group reports that its vessel RESOLVE Pioneer, the company’s flagship, has been stationed in Key West, Fla. Resolve Pioneer is an AHTS, a multi-service vessel with ice class hull and 80-ton bollard pull, stationed in Key West for an indefinite period -- for emergency response and salvage standby for tanker and other commercial vessel casualties in the Gulf of Mexico, the Caribbean and the U.S. east coast. The Pioneer had recently been deployed to support skimming operations throughout the Gulf of Mexico (GOM)…

As BP, the National Response Team, and an army of volunteers respond to the Deepwater Horizon incident in the Gulf of Mexico, NOIA member companies are lending their resources in an unprecedented cooperative effort to stop the flow of oil and prevent further damage to the environment. These resources include land-based and offshore facilities, aircraft, marine vessels, remotely operated vehicles (ROVs), a containment dome, subsea tooling, subsea video, dispersant, personnel, and technical expertise on suction systems…

On April 20, 2010, a loss of well control occurred and resulted in an explosion and fire on the Mobile Offshore Drilling Unit Deepwater Horizon. Eleven lives were lost in this incident and the MODU subsequently sank. As of the date of this safety alert the well has not been secured, and the resulting release of oil has been declared a spill of national significance with oil threatening sensitive coastlines and resources in the Gulf of Mexico. At the time of the accident, the Deepwater Horizon was operating 52 miles from shore in 4,992 feet of water with a subsea BOP stack.

Tidewater Inc. (NYSE: TDW) announced that it has reached an agreement with Aquanos AS for the purchase of the multi-purpose ROV and light construction vessel Aquanos Enabler, currently under construction at STX Europe shipyard in Brevik, Norway. The 311-ft, diesel electric vessel, which is expected to be delivered in January 2010, is equipped with a 100 ton active heave compensating crane, accommodations for 69 persons, firefighting equipment (Fifi I), DP2, a moonpool and a helideck. The vessel also has the cargo capabilities to operate as a large platform supply vessel.