Five fishermen men were rescued from a life raft overnight after their fishing vessel Kairos sank 75 miles west of the Isles of Scilly. UK Coastguard received two distress calls just after 23:45 yesterday, including an EPRIB from the Kairos that gave a GPS location for the vessel. Falmouth Coastguard coordinated the search that involved two Irish Coast Guard Search and Rescue helicopters, RNLI St Mary’s lifeboat, fishing vessels and two commercial vessels that were in the area.

Falmouth Coastguard has been assisting a cargo vessel which had six people on board and began sinking 12 miles east of the Lizard. The Sea Breeze is an 87m Barbados flagged cargo vessel with six crew onboard. It is carrying 2,750 tons of limestone and was bound for Shoreham at the time of the incident. Lizard and Falmouth RNLI Lifeboats and a rescue helicopter from RNAS Culdrose attempted to pump water out of vessel, the ‘Sea Breeze’, with their own pumps. Other merchant vessels, who heard the mayday relay broadcast from Falmouth Coastguard, also stood by in case they were required. 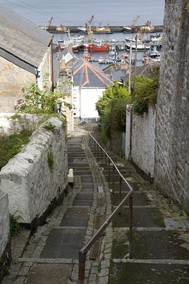 Two tugboats detained in a Westcountry fishing port and condemned as unseaworthy slip out unseen, believed bound for Africa. An investigation has been launched after the sudden disappearance of the two 151-tonne former Ministry of Defence (MoD) "dog class" boats, which are now thought to be bound for Africa. The 70ft tugs – Juliette Pride 1 and 2 – had been tied up at Newlyn, in West Cornwall, after major defects were found by surveyors from the Maritime and Coastguard Agency(MCA).

At 10:07 on Saturday 14, July 2012 Falmouth Coastguard received the relayed 'Mayday' broadcast from the German registered MSC Flaminia reporting that the crew had abandoned the vessel. Falmouth Coastguard broadcast an alert to all vessels in the area and the nearest vessel which could provide assistance was the oil tanker DS Crown which immediately changed course to intercept the MSC Flaminia. Six other merchant vessels also proceeded to the location to help with the search and rescue operation but were more than six hours from the location.