The Maritime Academy of Toledo Foundation wrapped up a successful Admiral’s Ball Weekend on Saturday, April 12, with the fourth Annual Admiral’s Ball and Charity Auction. More than 130 people attended the event which brought in $22,000 for the educational needs for cadets at the school. The theme for this year’s event was “Chart Their Course for Success With Us”. It was sponsored by The Toledo Blade, Toledo-Lucas County Port Authority, Dickenson Wright PLLC, Genoa Bank, IBEW, Local 8, as well as Ed Conn and Saga Schoffner. 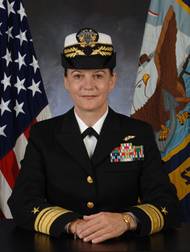 Rear Admiral Wendi B. Carpenter, USN (Ret.) President of State University of New York Maritime College weighs in. Rear Admiral Wendi Carpenter assumed the position President at of SUNY Maritime College less than 6 months ago. Already, however, she is showing the collective maritime world her own unique brand of leadership, in many different ways. As the first woman to serve as SUNY Maritime College President, she also aims to be trailblazer in other, perhaps more significant roles. Follow along as she shares her vision for what a modern maritime academy should be, and why.