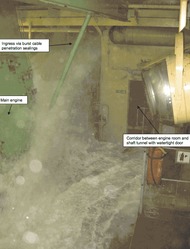 Denmark's Maritime Accident Investigation Board has released its report on the Suez Canal approach incident on board the container ship 'Emma Maersk' earlier in 2013. On the evening of 1 February 2013, a severe leakage occurred in the container ship EMMA MÆRSK while the ship, loaded with general cargo in about 14,000 containers, was about to pass southbound through the Suez Canal. The leakage was caused by a mechanical breakdown of a stern thruster situated at the aft part of the ship’s shaft tunnel whereby the shaft tunnel was flooded.

It has been confirmed that the world's largest container ships - Maersk Line's Triple E – will call at the Port of Gothenburg. Test runs have been taking place at the Port of Gothenburg for some time to simulate a call by Maersk Line's new ship generation, Triple E. The Port of Gothenburg is one of the few ports in Northern Europe that has fairways that are sufficiently wide and deep and cranes that are sufficiently large to receive Triple E ships. Ships which up to a year or so ago were the largest in the world – Emma Maersk and her sister ships – already call at the port.

The disabled 'Emma Maersk' starts the long tow from Suez to Europe for repairs to hull damage in vicinity of a stern thruster unit. Palle Laursen, Maersk Line’s Head of Ship Management in Copenhagen, says, “We are delighted that Emma is on the route back towards full service. However, this only the beginning of a long journey – once she gets to the repair facility it will still be several months before repairs are completed.”   He adds: “The efforts of the crew, the local Maersk Line, SCCT, and Svitzer organisations and the underwater repair teams should be fully recognised in enabling this.

Palle Laursen, Head of Ship Management for Maersk Line, shares the latest update on the 'Emma Maersk' Suez incident. Initial inspections by divers show that the water ingress was caused by damage to one of the stern thrusters. Thrusters are used for improving the vessels manoeuvrability and consist of a shaft tunnel fitted with a propeller delivering sideways thrust. It is now known that several propeller blades have broken off and there is severe damage to the propeller mounting, resulting in a crack in the forward stern thruster tunnel which caused the ingress of water.

Maersk Line’s largest container vessel, had an ingress of water into the engine room & terminated the voyage at Suez Container Terminal. According to a statement issued by Maersk, the vessel had just commenced its southbound voyage through the Suez Canal en route to Asia when water began flooding the engine room, and the captain decided to terminate the planned voyage and go alongside the nearby Suez Canal Container Terminal. The initial assessment is that the vessel was not at any time in any danger of sinking, nor was the crew at any time in danger. There are no signs of pollution. 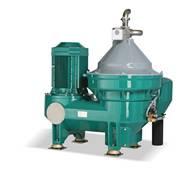 The Korean company Daewoo Shipbuilding & Marine Engineering (DSME) has placed an order for a total of 160 separators of the new eagleclass generation with GEA Westfalia Separator Group. They will operate on the twenty unequalled Triple-E container ships of A.P. Moeller Maersk shipping line, which will be launched between the end of 2013 and 2015. The Triple-E class is a new development of superlative in many respects. Every ship will be 400 metres in length, 59 metres in width and 73 meters in height, and can load 18,000 twenty-foot containers. The draft will be around 14.5 metres.

At a signing ceremony in Tokyo, Japan, Maersk Line exercised its option with Korea’s Daewoo Shipbuilding & Marine Engineering Co., Ltd. to build an additional 10 Triple-E ships. The event follows Maersk Line's order in February this year for 10 Triple-E vessels with two options - each for an additional 10 ships. “I am very excited to have signed a contract with Daewoo for 10 more Triple-E ships. We now have twenty Triple-E on order. They underline our strong commitment to the Asia-Europe trade and fit well with our current ambitions and expectations for the future development of the trade.

Maersk Line signed a contract with 's Daewoo Shipbuilding & Marine Engineering Co., Ltd. to build 10 of what the company terms as the world's largest and most efficient vessels, with an option for an additional 20 vessels. Scheduled for delivery between 2013 and 2015, they will entirely change the shipping industry's understanding of size and efficiency. Called the 'Triple-E' class for the three main purposes behind their creation -- Economy of scale, Energy efficient and Environmentally…