China's coal imports in May fell nearly 20% compared with a year earlier even as demand recovered at power plants and industrial users, customs data showed on Sunday.Analysts and industrial participants had expected China to tighten coal import rules in the second half of 2020 to support domestic miners, and imports starting in July may drop by as much as a quarter from the corresponding 2019 period.Sunday's data showed the country imported 22.06 million tonnes of coal last month, according to the General Administration of Customs released on Sunday.

Liebherr Container Cranes have secured an order for the supply of 10 electric rubber tyre gantry cranes to Montreal Gateway Terminal Partnerships. The cranes will be delivered to both the Cast and Racine Terminals in 2019.Liebherr supplied its first crane to Cast Terminal, Montreal in 1997. Since then Montreal Gateway Terminal Partnership have procured an additional four STS cranes and eight RTG cranes from Liebherr, further cementing their working relationship. In 2016, a conductor bar system was installed at the terminal…

Norwegian oil and gas major Equinor, formerly Statoil, is acquiring the Danish energy trading company, Danske Commodities for EUR 400 million (USD 470 mln). "Equinor has reached agreement to buy 100% of the shares in Danish energy trading company Danske Commodities (DC) for EUR 400 million, with smaller contingent payments depending on DC’s performance over the next couple of years," said a press release from the company. This acquisition – of one of Europe’s largest short-term electricity traders – supports Equinor’s development towards becoming a broad energy company. 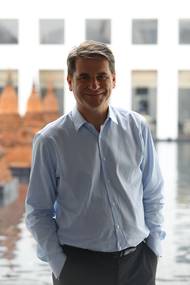 The economic news from China this morning were somewhat comforting but highlights that the economy activity in the world’s largest economy is certainly slowing down, reports BIMCO. Behind the headline GDP, other economic indicators such as industrial production, electricity consumption, credit growth and real estate investments suggest that things are still settling down at a slower pace going forward, from what have seen in recent years. All parts of the global shipping industry feels the impact as the Chinese economy changes in growth pace, size and composition.

Drydocks World signed an agreement today with Petrofac to build the BorWin3 high voltage direct current (HVDC) converter platform in the North Sea, named BorWin gamma. When completed, this will provide an essential renewable offshore resource to meet increasing energy demands. Drydocks World has successfully secured the contract for the fabrication, commissioning and load out of the BorWin3 platform, which will transmit electricity from the connected offshore wind farms to the mainland of Germany.

ABB to Join UN's Sustainable Energy for All initiative

ABB announced at the UN Climate Summit in New York today that it is joining the UN’s Sustainable Energy for All initiative (SE4ALL). The company will provide expertise on energy efficient motors and transformers to help governments devise policies that accelerate energy savings. “ABB is excited to be part of the United Nations initiative and to contribute to decoupling economic growth from energy consumption and emissions,” said Ulrich Spiesshofer, CEO of ABB. “ Many cost- and energy-efficient technologies are already available.

GAC Hong Kong’s multiple eco-friendly efforts were awarded First Prize in the GAC Group Chairman’s Award for Environmental Excellence for 2012. Since 2009, the company has been recycling paper, aluminum, plastic, toner cartridges, electronic equipment and more. In 2011, GAC Hong Kong’s recycling efforts helped it reduce its carbon footprint by almost four tons, and earned it the second prize in the Chairman’s Award. In 2012, its broad and sustained commitment continued, and the company’s carbon footprint was reduced by more than five tons.

Renewables to Surpass Gas by 2016 in Global Power Mix

Power generation from hydro, wind, solar and other renewable sources worldwide will exceed that from gas and be twice that from nuclear by 2016, the International Energy Agency (IEA) said today in its second annual Medium-Term Renewable Energy Market Report (MTRMR). According to the MTRMR, despite a difficult economic context, renewable power is expected to increase by 40% in the next five years. Renewables are now the fastest-growing power generation sector and will make up almost a quarter of the global power mix by 2018, up from an estimated 20% in 2011.

China's shipping industry grapples with recession caused by waning demand & higher costs, & many small businesses are facing bankruptcy. The Ministry of Transport said that In the first six months, turnover at ports increased 7.2 percent year on year to 4.74 billion tonnes, 6.1 percentage points lower than the growth rate in same period last year. A drop in domestic traffic was to blame, according to figures released by the ministry at a press conference. Container traffic at those ports expanded 8.8 percent to 84.59 million TEUs, 4.3 percentage points lower than the same period a year ago.