Eco Marine Power (EMP) announce that it will exhibit for the first time a working prototype of its EnergySail technology and the automated control system at  Sea Japan in Tokyo. This laboratory prototype will be exhibited along with several associated technologies including an energy storage solution and flexible marine grade photovoltaic panels. The patented EnergySail is a rigid sail device developed by EMP that will allow ships to harness the power of the wind and sun in order to reduce fuel costs plus lower noxious gas and carbon emissions.

Eco Marine Power (EMP) has signed a Memorandum of Understanding (MOU) with a Singapore based shipping company to supply its Aquarius Management and Automation (MAS) + Solar solution. The solution will also include hardware and software that will allow ships to monitor fuel oil consumption in real time, automatically calculate NOx/SOx/CO2 emissions and interface with marine solar power systems. Initially one ship in the fleet will be installed with the Aquarius MAS + Solar solution and its performance jointly evaluated.

As part of the ongoing Blue Star Delos Renewable Energy Innovation Project, Eco Marine Power (EMP) stated that the Aquarius Management & Automation System (MAS) installed on Blue Star Delos has been updated with new fuel oil consumption (FOC) and emissions monitoring software. This updated software combined with the Aquarius MAS hardware allows for fuel consumption data from all flow meters on the ship to be displayed and logged in real-time. In addition CO2, NOx and SOx emissions are calculated based on the fuel type being used.

Automated rigid sail set to bring back wind-assisted propulsion for shipping. Onomichi, Japan – 8th April 2016 – In another important step towards bringing its rigid sail technology onto ships Eco Marine Power (EMP) has commenced work on the production of an EnergySail in Onomichi, Japan. This first ever factory produced EnergySail is being manufactured by EMP's strategic partner - Teramoto Iron Works. The EnergySail (patent pending) is an automated rigid sail device that enables ships to utilize the power of the wind to reduce fuel consumption and lower vessel emissions. 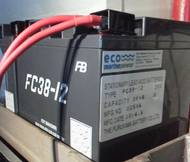 A range of marine battery solutions received approval for use on-board ships or marine related applications such as offshore platforms and renewable energy projects. Available from Eco Marine Power (EMP), a developer of renewable energy solutions for ships, in cooperation with storage batteries and electrical machinery manufacturer Furukawa Battery Company of Japan, the battery range has been accepted for use on classed vessels by ClassNK (Nippon Kaiji Kyokai) in addition to having been evaluated by EMP.

As a result of the recent successful completion of sea trials on-board the high speed car and passenger ferry, Blue Star Delos, Eco Marine Power (EMP) has now cleared the Aquarius MAS + Solar and Aquarius Marine Solar Power solutions for commercial release. During two days of testing and evaluation on the 17th and 19th May, 2015, the performance of the Aquarius MAS + Solar trial system on-board Delos was assessed by both EMP and Blue Star Ferries technical personnel as part of the Blue Star Delos Renewable Energy Innovation Project. 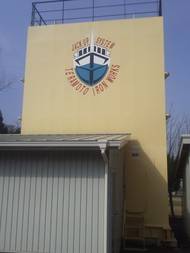 Eco Marine Power (EMP) in cooperation with its strategic partner, Teramoto Iron Works Co. Ltd., have agreed to establish a development and test facility in Onomichi, Hiroshima, focused on marine technologies for the shipping and offshore industries. The new facility, to be known as the Onomichi Marine-Tech Test Center or Onomichi MTTC, will be co-located at the Teramoto Iron Works Chojahara Workshop. The center will include a large outdoor evaluation area that will allow for innovative devices such as EMP’s EnergySail to be tested.

As part of its product rollout strategy Eco Marine Power (EMP) announced today that it has signed a support agreement with Theodosiou Bros Ltd (TRIAD Ltd) of Piraeus, Greece. This agreement between EMP and TRIAD Ltd will lead to the establishment of a technical support hub in Greece from which the companies will be able to provide jointly, a variety of technical services related to EMP's products and solutions. In particular EMP and TRIAD Ltd will now be able to offer a wide range…

Eco Marine Power together with strategic partners has installed an Aquarius Management & Automation System (MAS) integrated with a marine solar panel array on-board the Blue Star 'Delos'. The Aquarius MAS has been installed as part of a joint renewable energy project with Blue Star Ferries and the approximately 2kW trial solar array on-board the vessel is now in operation and providing a source of renewable energy for the ship. This important milestone for EMP means that the company…

Eco Marine Power is pleased to announce that it has been named as a finalist in two categories of the inaugural Ship Efficiency Awards 2014. The Ship Efficiency Awards 2014, hosted by Lloyd's Register and organised by Fathom, will recognise and celebrate the organisations and individuals within the maritime sector that excel in efficient operations, implement fresh thinking, offer proven efficiency benefits and technological innovation. Eco Marine Power has been short-listed in…

Eco Marine Power (EMP) today revealed details of its Aquarius Unmanned Surface Vessel (USV) and announced that it will begin work related to the construction of a prototype. The Aquarius USV is being developed as a cost-effective unmanned surface vessel (USV) and will incorporate a number of technologies from EMP and its strategic partners. These technologies include marine computer systems and lightweight flexible marine solar panels. The Aquarius USV will be powered by a solar-electric hybrid marine power solution which will also feature a solar panel array designed by EMP.

First public display of Aquarius MRE System & Aquarius Eco Ship concept. Eco Marine Power (EMP) has announced  that it will be presenting for the first time a number of the technologies it is developing including the Aquarius Marine Renewable Energy (MRE) System at Sea Japan 2014. During the three day event in Tokyo April 9-11, EMP will also outline its vision for the future development of sustainable shipping technologies including wind and solar power solutions. The Aquarius MRE System is a renewable energy solution for shipping that incorporates rigid sails…

Another step forward in the development of the Aquarius System was made recently when workbegun on the detailed design of the wind and solar sail panel. This panel or rigid sail will beused to harness wind & solar energy which will then be used to help power a ship thereby reducing fuel consumption and the emissions. The rigid sails are being developed by Eco Marine Power in co-operation with a number of development partners. The rigid sails will form part of an array which will allow ships to tapinto renewable energy at sea, at anchor or even when a ship is in harbour.

Eco Marine Power Co. Ltd. (EMP) unveiled a concept ship design incorporating its Aquarius Marine Renewable Energy (MRE) System. This concept design is called the Aquarius Eco Ship and is part of Eco Marine Power’s ongoing development efforts aimed at moving shipping towards a more sustainable future. The Aquarius Eco Ship is the result of a comprehensive study project which focused on optimising the design of a large ocean going ship such as a bulk carrier or oil tanker to harness the power of the wind & sun by using the Aquarius MRE System. 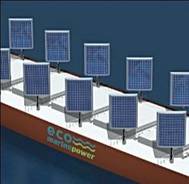 Eco Marine Power completes EnergySail design. Japan's Eco Marine Power Co. Ltd. announce that it has completed the high level design for its innovative rigid sail known as the EnergySail, a revolutionary device that will allow ships to harness the power of the wind and sun in order to reduce fuel costs plus lower noxious gas and carbon emissions. The EnergySail (patent pending) is unlike any other sail - it can be used even when a ship is at anchor or in port and has been designed to withstand high winds or even sudden micro-bursts.

Eco Marine Power Co. Ltd. (EMP) release further details of its modified version of the Aquarius MRE System for naval and coast guard ships. This modified system will use EMP’s patent pending EnergySail technology to form an array of devices able to harness renewable energy on these types of ships. The unique flexibility of the EnergySail design means that it can be adapted to suit a wide range of ships while the basic elements of the system remain identical. This simplifies parts management…

Eco Marine Power (EMP) to collaborate with Solbian Energie Alternative Srl of Italy to develop marine solar power applications. Initially this co-operation will be centred around lab testing activities in Osaka, Japan, with the focus being on incorporating Solbian's technology into EMP's EnergySail – a configurable rigid sail that is able to tap into the power of the wind & sun. However it is planned to expand the range of testing later this year to also include sea trials & apply Solbian technology to other projects such as the AquariusUSV and Aquarius Eco Ship.