Israeli shipping firm Zim said on Wednesday it would start to offer direct service to Jebel Ali port in the United Arab Emirates (UAE).With its new line, Zim joins a number of international rivals—including MSC, Maersk—to announce they would offer a connection between Israel and the UAE since the countries agreed to normalize relations.Zim said its line will take cargo from Jebel Ali to Israel's Mediterranean Haifa port and, in the other direction, offer service from Israel and the eastern Mediterranean to the UAE.Zim is 32% owned by Kenon Holdings .Rani Ben Yehuda, a Zim executive vice presid

European Investment Bank (EIB) and Public Gas Corporation of Greece (DEPA) have signed an agreement to finance with up to 20 million euros the construction of a new liquid natural gas (LNG) bunkering vessel for maritime use in Greece which will be based in Piraeus. EIB said that the first vessel of its kind in Greece and the Eastern Mediterranean will have a capacity of 3,000 cubic meters and will be supplied with LNG at Revithoussa LNG terminal.The bunker tanker will refuel its LNG at Revithoussa LNG terminal and will carry out bunkering both in Piraeus and other Greek ports…

American/British-owned German cruise line AIDA Cruises announced that model and TV host Franziska Knuppe christened  AIDAmira in Palma de Mallorca.AIDAmira is the fourth ship in the AIDA Selection program, sailing longer itineraries to exotic locales, similar to her function for Costa.After a debut cruise in the Mediterranean until December 4, 2019,  the cruise line will take the new Selection ship to Sète in the south of France, the Catalan metropolis of Barcelona, and back to… 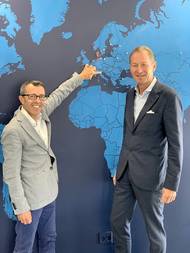 MacArtney Underwater Technology is ready to launch its newest operation, MacArtney Italy, supporting local Italian customers with the global MacArtney brand.A long-standing cornerstone of the MacArtney strategy is to continually strengthen global reach and customer support through a strategic local presence in key markets. With a renewed focus on expanding their global footprint, MacArtney Underwater Technology will be offering their system solution technology and expertise to the Italian underwater technology markets…

The United Nations High Commissioner for Refugees (UNHCR) has sent an appeal to the European governments to allow 507 people recently rescued from the Mediterranean and now stranded at sea to leave the vessels.Many are reportedly survivors of appalling abuses in Libya and are from refugee-producing countries. They are in need of humanitarian assistance and some have already expressed an intention to seek international protection.“This is a race against time,” said Vincent Cochetel, UNHCR Special Envoy for the Central Mediterranean. “Storms are coming and conditions are only going to get worse.

Turkish-based tour operator Anex Tour is entering the cruise business with the acquisition of Saga Cruises' Saga Sapphire.Anex chairman Neset Kockar said the acquisition would allow the Turkish holiday giant to create a “unique eastern Mediterranean cruise experience”. “With changing habits of travelers, we must adopt our product offering accordingly,” said Kockar.The 800-passenger vessel will be transferred to ANEX Tour in mid-2020 and begin sailing cruises around the Eastern Mediterranean from her new homeport in Antalya…

The Greek port of Piraeus signed a memorandum of understanding (MoU) with Italy’s port authorities from the cities of Venice and Chioggia.The agreement seeks to develop port services and promote increased trade flow between Europe, the Mediterranean and the Far East.The MoU was signed during a meeting between the chairman and CEO of Piraeus port Fu Chengqiu and the president of the Northern Adriatic Sea Port Authority (Venice and Chioggia) Pino Musolino.The MoU envisages cooperation in improving the exchange of best practices and knowhow in port management…

Contship Italia Group has been pulling all the stops to increase its intermodal offering during the past months.Italy’s leading service provider for integrated global supply chains said that its Rail Hub Milano (RHM) and its gateway ports La Spezia and Ravenna serve as backbone of the Group’s growing intermodal network.La Spezia is geographically located within a range of 320 km from the key economic regions in Italy, accounting for over 47% of the total Italian GDP. RHM is located in Melzo, just outside the city of Milan at the heart of consumer and industrial regions.

ZIM Integrated Shipping Services (ZIM) has announced that starting September, ZIM India-Med Express Line (IMX) will have a new rotation, with significantly faster transit time, making the fastest on the trade.A press release from the company claimed that ZIM Customers will benefit from fast transit time and improved port rotationIt said: "In order to improve our service to customers and cater for market needs, ZIM will introduce changes to IMX service, as follows: the line will operate 5 vessels, and the round-trip will be shortened to 35 days.

INTTRA,  neutral network, software and information provider at the center of the ocean shipping industry, has announced the addition of Turkon Line, the latest regional carrier to join its rapidly expanding network.Turkon provides shipping services focused on the US, Europe and the Eastern Mediterranean through eight locations strategically located across Turkey, the US and Europe. Turkon will offer its customers a suite of shipping services through INTTRA’s network, including booking requests, shipping instructions, and Track and Trace.

MSC Mediterranean Shipping Company S.A. is enhancing intermodal connections via the port of Trieste, Italy, to improve transit times for shippers moving cargo between Asia, the Mediterranean and Europe. The new “MSC Graz-Trieste Runner” shuttle train, operated together with Cargo Center Graz, connects Trieste with Werndorf, Austria, once a week. The service is the first direct connection between Trieste and Werndorf and its schedule is coordinated with MSC’s Far East Phoenix ocean-liner service to ensure optimal timing for intercontinental cargo delivery.

Greece on Monday closed the Corinth canal after a rockfall that followed heavy rain, temporarily blocking a transit route used mainly by commercial ships and pleasure yachts. The 6.4-km canal serves about 11,000 ships a year, offering a short transit from southern Italy to the Eastern Mediterranean and the Black Sea, saving mariners a 700-km (434-mile) journey around the Peloponnese Peninsula. But its 21.5-metre (64-foot) width means it is not a key waterway for ocean-going vessels.

CMA CGM said it will expand its service offering to and from Lebanon by serving the port of Tripoli, Lebanon's second largest commercial port after Beirut, on a weekly basis. With its WEMED service linking the eastern Mediterranean countries with those in the west, the port of Tripoli will become the second stop in Lebanon, linking this production area to France, Spain, Algeria, Turkey and Egypt. CMA CGM said this new offer is aimed at local exporters located in northern Lebanon, who generates more than 20 percent of the country's trade volumes.

CMA CGM to Strengthen its Presence in South America

The CMA CGM group, a world leader in container shipping, announces the reshuffling of two services in addition to the MERCOSUL buyout project and pursues its development strategy in South America, with SAFRAN and SIRIUS. These two services between South America and Europe are: SAFRAN for Northern Europe and SIRIUS for the Mediterranean. SAFRAN will be starting in Rotterdam on September 27, 2017. With this service, the CMA CGM Group offers the fastest service on the trade to its customers.

Following its move to acquire MERCOSUL from Maersk Line, the CMA CGM group has furthered its development strategy in South America by reshuffling its container shipping services between the East Coast of South America and Europe with North of Europe and the Mediterranean. SAFRAN will start in Rotterdam on September 27, 2017, calling at the ports of Rotterdam / London / Hamburg / Antwerp / Le Havre / Algeciras / Santos / Paranagua / Buenos Aires / Montevideo / Itapoa / Paranagua / Santos / Pecem / Tangier.

Some of Spain's biggest port terminals came to a standstill on Monday as shipping companies redirected cargos to avoid a dockers' strike. After months of talks between unions, companies and the Spanish government over a reform of port hiring practices, dockers held the first of several planned strikes to protest against possible job losses. Some container shipping firms such as Maersk re-routed boats destined for the southern port of Algeciras to get around the strike, during which dockers will stop working every other hour on Monday, Wednesday and Friday this week.

Shipping Financier DVB Bank reported a consolidated net loss before taxes of EUR 135.3 million ($142.4 miln) for 2016 (previous year: consolidated net income of EUR 46.1 million). Since DVB Bank SE, the parent company of the DVB Bank Group, did not generate a net retained profit during the financial year, regretfully no dividends will be paid. Due to the persistent downturn in numerous segments of the shipping industry and an ongoing challenging environment for the offshore industry caused by low oil prices…

CMA CGM has announced the new upgraded service offer NC LEVANT, which directly links the Eastern Mediterranean Sea (Turkey, Egypt, Lebanon) and Northern Europe (Belgium, England, Germany), via Malta, Spain and Italy. The NC Levant service will now provide extended port coverage with a new export call in Tanger Med towards the Levant Sea, and a new import call in Algeciras towards Northern Europe. Transit times offered will be among the best on the market. The upgraded service will also cover the significant ports in the region…

The port of Kiel is extending its services in combined traffic with a new direct train connection between Kiel and the Adriatic port of Trieste in Northern Italy. “This is a milestone for Kiel as a logistics hub,” said Dr. Dirk Claus, Managing Director at PORT OF KIEL. The destinations of the train - Kiel and Trieste - are points of departure for efficient ferry lines to Scandinavia and to Turkey. The direct train connection was initiated by the logistics company EKOL. Stena Line…

WISTA Cyprus has recently organized a training course for its members with the title “Energy Economics and Shipping”, hosting the Professor Michael Tamvakis from Cass Business School, City University in London. Professor Tamvakis presented, over a full day, topics related to the energy industry, starting from fundamentals and building onto the particulars of upstream, midstream and downstream sectors. The training touched upon the growing importance of natural gas, the economics and export routes surrounding recent gas discoveries in the Eastern Mediterranean.