Developments in the oil tanker market in the past decade dominated by geopolitics, says shipping association BIMCO.Crude oil and product tanker markets alike have faced high volatility in recent weeks and months, largely due to geopolitics and the constantly evolving situation in the global oil markets. The first major disturbance since the fall in the oil price between the fourth quarter of 2104 and first quarter of 2016 came in the fourth quarter of 2019, after which freight rates have bounced back despite a collapse in demand.In these extraordinary times…

Highly sought after types of oil best suited to making cleaner shipping fuel are suddenly finding they are a tougher sell for thirsty East Asian markets, traders say, in an unintended consequence of U.S. sanctions on a Chinese shipping fleet.With just over two months until environmental rules are set to mandate the biggest changes to ship power in over a century, certain rare types of West African oil have soared in value but have had to be marked down due to the higher costs of transport.The United States imposed sanctions on units of China's COSCO on Sept. 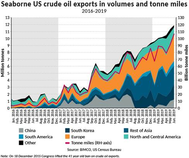 U.S. crude oil exports surged 260,000 barrels per day (bpd) in June to a monthly record of 3.16 million bpd as South Korea bought record volumes and China resumed purchases, data from the U.S. Census Bureau showed on Friday.South Korea surpassed Canada to become the biggest purchaser of U.S. crude at about 605,000 bpd. China purchased about 292,000 bpd, the most since June last year and was the third-largest buyer of U.S. crude in June, the data showed.China, once the top buyer of U.S.

The development that saw no U.S. seaborne exports of crude oil to China in August has continued into September, according to BIMCO. This is despite crude oil not being a part of the ‘official trade war’.“The trade war between the U.S. and China is now impacting trade in both tariffed and some un-tariffed goods with both countries looking elsewhere for alternative buyers and sellers,” said Peter Sand, BIMCO’s Chief Shipping Analyst.“Ton mile demand generated by total U.S. crude oil exports has risen 17 percent from August to September…

US Crude Oil Shipments to China Halt Amid Trade War

U.S. crude oil shipments to China have "totally stopped", the President of China Merchants Energy Shipping Co (CMES) said on Wednesday, as the trade war between the world's two biggest economies takes its toll on what was a fast growing businesses.Washington and Beijing have slapped steep import tariffs on hundreds of goods in the past months. And although U.S. crude oil exports to China, which only started in 2016, have not yet been included, Chinese oil importers have shied away from new orders recently."We are one of the major carriers for crude oil from the U.S. to China.

Swiss commodities trader Trafigura has applied to build a deep-water port in Corpus Christi, Texas, on the Gulf of Mexico, which will be able to load supertankers, reports FT.The report said that the plan would see the commodity house build an offshore deepwater port facility  with a view to accommodate very large crude carriers (VLCC) capable of carrying more than 2m barrels of crude. It requires approval from the US Department of Transportation’s maritime division.According to a Reuters report…

US Oil Exports to India Soar Ahead of Iran Sanctions

U.S. crude oil exports to India hit a record in June and so far this year are almost double last year's total as the Asian nation's refiners move to replace supplies from Iran and Venezuela in a win for the Trump administration.U.S. President Donald Trump's administration has been pressuring its allies to cut imports of Iranian goods to zero by November and India's shift advances the U.S. administration efforts to use energy to further its political goals.The United States has become a major crude exporter…

Sales of Kutubu Light crude oil cargoes will resume in the Asia spot market in July after a major earthquake in Papua New Guinea shut production from late February to early April, three industry sources said on Monday.While production at the facility resumed in early April, producers of the light crude oil have been trying to meet previously committed cargoes to buyers which had been delayed due to the earthquake, one of the people said.The sources declined to be identified because…

The Asian Aframax market has been strengthening steadily, with rates for the Indo/Japan route up by w25 points w-o-w at w135. The Baltic Exchange’s benchmark TD14 route reached w127.50 Tuesday, jumping by w29 points w-o-w. This is partly due to underlying seasonality as refiners in the region typically raise utilization rates during Q4 in order to meet winter demand. An early and colder-than-usual winter in North Asia has led to increased heating fuel demand, lending further support to refinery runs.

In the Very Large Crude Carriers (VLCC) segment, which showed modest growth in overall volume from 2014 to 2015, the main changes were concentrated in the eastern hemisphere, says a report by Tanker Research & Consulting department at Poten & Partners. In the Middle East, there was a significant increase in movements from the Arabian Gulf to the Red Sea. Reported VLCC fixtures increased almost fivefold from 12 in 2014 to 56 in 2015, mainly as a result of the startup of the 400,000 barrels per day (bpd) Yanbu refinery at the end of 2014, which is located on Saudi Arabia’s Red Sea coast.

Euronav NV (NYSE: EURN) this morning issued a release to set the record straight with investors, from its perspective, on current market conditions in the large tanker market. According to Euronav, despite the current capital market's predominantly negative sentiment , Euronav said that it continues to experience robust and fundamental strength in the VLCC and Suezmax sectors. The average daily time charter equivalent rates (TCE) obtained by the company’s fleet in the tankers International pool in the fourth quarter 2015 was approximately $62,000 per day (4Q14: $31,650/day).

One of the U.S. Senate's top advocates for lifting the ban on domestic crude exports urged the Commerce Department on Thursday to disclose whether any oil swaps with Mexico have actually been finalized after the agency approved the transactions in August. Administration officials told Reuters in August that the Commerce Department was "acting favorably on a number of applications" to export U.S. crude in exchange for imported oil from Mexico, in a step seen as loosening the ban on most crude oil exports.

Scrapping a decades-old ban on U.S. crude oil exports would spur job creation and boost energy security by encouraging new investment that lifts production, Exxon Mobil Corp's chief executive said on Thursday. Chief Executive Officer Rex Tillerson, speaking to a business group, said trade restrictions should also be lifted for exports of liquefied natural gas, or LNG, which are subject to lengthy regulatory reviews. Dozens of companies are lining up to export LNG and a superlight type of crude oil known as condensate as U.S.