Ship operators are placing greater recognition on the role crew members play as the key to reaching higher efficiency goals, according to crew specialist Danica, which is expanding to meet the growing demand for quality crew services.As part of its expansion plans, the company will shortly open a new office in Riga, Latvia, and more are set to follow. Danica Managing Director Henrik Jensen said: “Shipping companies are beginning to realize that they have 8-10 seafarers on board…

A new two-year study from researchers at Solent University entitled, ‘The Effective Crew Project’[i] has highlighted that stable crewing can improve safety, wellbeing and financial outcomes.The research examined the benefits and challenges of implementing stable and fluid crews within the merchant shipping industry. It found that stable crewing results in improved accountability and responsibility leading to better vessel maintenance, reduced maintenance costs and shorter handover times.

ShipServ, a maritime e-procurement platform, has announced it has signed an agreement with Hanseaticsoft GmbH, a maritime cloud-based software solution providers. The agreement is in line with ShipServ’s strategy to develop relationships with advanced technology partners, where the ShipServ TradeNet platform is seamlessly integrated into enterprise-wide systems, which optimize the management of an entire fleet, improving operational performance and efficiencies, as well as driving…

Ship management and services major V.Group has signed a contract with Abu Dhabi-based ADNOC Logistics & Services to provide crew management services to 93 offshore support vessels.The ship management company said that to support the contract, and to enable further expansion in the region, it has opened a new Abu Dhabi office, which began operations in early August.The office and service function was successfully delivered within a 90-day period, as part of a formal agreement between…

The world’s only vessels that operate around the clock, 365 days a year need to ensure safety and maintenance are built into the design specifications of each ship, according to Corrado Cuccurullo, CEO of Shi.I.E.L.D.Transhipper vessels are effectively floating ‘production lines’ and the sophisticated machinery on board and continuous operations puts additional pressure on operators to ensure that there are no breakdowns and that the vessels operate safely.“The potential cost… 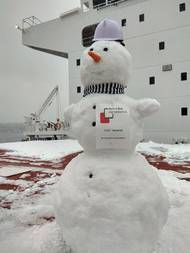 Danica has announced it has been entrusted with the crew management of the newbuilding ultramax Port Imabari for Lisbon headquartered Portline Bulk International.Delivered in January, the 63,500 DWT Port Imabari, equipped with four 30.5 tonnes (SWL) grab cranes, was built at Japan’s Imabari Shipyard. The Marshall Islands-flagged bulk carrier brings Danica’s fleet of crew managed vessels to 23.Henrik Jensen, Danica Managing Director, said: “We thank the owners for the trust they… 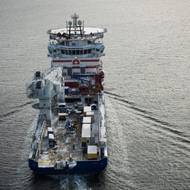 The owner and operator of platform supply vessels (PSVs) Nordic American Offshore (NAO) has informed that its project to combine with Horizon Maritime Services has been called off.A stock exchange announcement from the Bermuda-based company said: "The contemplated business combination, involving NAO and a group in Eastern Canada (Horizon Maritime), has been shelved as it has been decided not to move forward at this time."It added that a Nordic company (Nordic Canadian Shipping…

The global marine and offshore vessel management and support services provider V.Group  has announced that it will unveil a new app for seafarers as well as an upgraded training centre in Manila as progress accelerates on Project Embark.Project Embark is a programme designed to transform the way the leading supplier of independent ship management and related marine services handles crewing for its pool of 44,000 seafarers.A press release from the provider of marine support services said that The app will enhance the seafarers’ experience…

V.Group, a leading provider of marine support services, has announced that it will unveil a new app for seafarers as well as an upgraded training center in Manila as progress accelerates on Project Embark, a program designed to transform the way the leading supplier of independent ship management and related marine services handles crewing for its pool of 44,000 seafarers.The app will enhance the seafarers’ experience, while enabling V.Group to utilize regularly updated seafarer data to improve crewing performance and assist in planning.

In what can be construed as another positive sign for the turnaround of the offshore energy markets, Bernhard Schulte Shipmanagement (BSM) said it has set up a new business unit to focus on the oil and gas and offshore energy renewables markets.“This segment is focused on special operations and driven by different rules, so we decided to establish a dedicated expert team to specifically attend to the needs of the offshore market,” said Matthias Mueller, Managing Director of BSM…

The shipping industry is facing unprecedented change. With topics such as new environmental regulations and the opportunities and challenges of digitalisation dominating the conversation, seafarers’ welfare has tended to be overlooked.This trend is slowly changing as the industry continues to recognize the need to professionalize its approach to maritime welfare, but there is a long way to go. True, that there are model owners and operators within the industry who uphold the highest standards of welfare for their crew…

V.Group Sets Out to Transform Crewing

Marine and offshore vessel management and support services provider V.Group has engaged with management consultancy Accenture to transform its approach to crew management. Named Embark, the project seeks to develop an in-house shared services model which streamlines and optimizes key processes for V.Group’s seafarers, customers and colleagues. Embark will see the introduction of new and enhanced technology to support these shared services and digitize the shipowner and seafarer experience.For customers…

The Hamburg-based Schulte Group said it has received clearance by the German Federal Cartel Office for the acquisition of the LNG specialist PRONAV. With this strategic move, the family-owned ship owner and manager continues to increase its capabilities and capacity in the growing liquefied natural gas (LNG) market. Through the acquisition of PRONAV, the Schulte Group has increased the number of vessels under full management in its third-party management fleet by six additional LNG carriers (LNGC).

Global ship management company OSM Maritime Group said it has been awarded full crew management of Lauritzen Kosan’s entire fleet of liquefied gas tankers, including 26 refrigerated ethylene, semi-refrigerated and pressurised gas carriers. OSM’s focus on the provision of personal service and expert seafarers, combined with delivering business efficiencies and economies of scale, has seen the company grow considerably in 2017. This latest contract ranks as its largest individual win of the year, bringing the number of vessels OSM provides services to far beyond the 500 mark.

Columbia Shipmanagement and Marlow Navigation announced confirmation of regulatory approval allowing their previously reported intended merger to proceed. The merger brings together two of the shipping industry’s privately owned shipmanagement companies. Columbia Marlow will continue focus on its core services of technical and crew management, together with whatever support services are required by its clients.

In a meeting in Manila on April 18, OSM signed a joint venture agreement with “K” Line’s crewing agency Ventis to provide Filipino crew to “K” Line’s entire fleet of liquefied natural gas (LNG) carriers. “Today marks a significant milestone in the relationship between ‘K’ Line group and OSM, in that we have signed an MOU for establishing a JV for ‘K’ Line’s LNG Filipino manning,” said Tommy Olofsen, Managing Director for OSM Crew Management. When the two companies signed the strategic manning partnership agreement…

V.Group has acquired Selandia Holdings Pte. Ltd and its subsidiaries comprising the Selandia Ship Management Group as part of its strategy to offer clients high quality outsourced marine services from Asia. Founded originally in Mumbai, India in 1995, Selandia will continue to operate as an independent ship management brand within the V.Group portfolio. Combining the independent operations of Selandia with V.Group’s existing portfolio, V.Group said it now offers the largest ship management fulfillment capability from India and has the widest access to Indian seafarers.

Oman Ship Management Company (OSC) said it hosted a high-level conference in Mumbai for senior officers following a rapid rise in crew numbers. The ‘Seafarers’ Safety Conference’ was a platform for Oman Shipping Company’s subsidiary Oman Ship Management Company (OSMC) to share the best safety practices and current and future trends in the maritime industry with its sea team. It comes as the company released latest employment figures showing 1775 crew members working across 41 vessels – rising 500pc since 2010 when crew numbers remained under 400.

Oman Ship Management Company (OSC) hosted a high-level conference in Mumbai for senior officers following a rapid rise in crew numbers. The ‘Seafarers’ Safety Conference’ was a platform for Oman Shipping Company’s subsidiary Oman Ship Management Company (OSMC) to share the best safety practices and current and future trends in the maritime industry with its sea team. It comes as the company released latest employment figures showing 1775 crew members working across 41 vessels – rising 500pc since 2010 when crew numbers remained under 400.