Latest move to Enter El Salvador with Energía del Pacífico will Reinforce SAAM Towage's Presence in Central America.The Managing Director of SAAM Towage, Felipe Rioja, celebrated the company’s upcoming launch in the new market: El Salvador. “We will provide services for the Energía del Pacífico (EDP) project at the Port of Acajutla, which reinforces our presence in Central America and our commitment to the region,” he commented.The long-term agreement with EDP calls for allocating three tugs, two of which are new, to power plant operations.

APM Terminals, an international container terminal operating company, said that its Moín Container Terminal celebrated the movements of its 1 millionth TEU on 11 December 2019.This milestone, achieved in less than 10 months of operation, is particularly significant, as the next phase of the terminal will be built when an annual volume of 1.5 million TEUs is reached, said a press note. APM Terminals has a 30-year concession to operate the terminal.The millionth TEU was unloaded…

APM Terminals Moín made history when it welcomed the MSC Sara Elena, the largest container ship to ever berth in Costa Rica, measuring 300m long and a capacity of 8,000 TEUs.In 337 lifts, exports of key Costa Rican exports, included pineapples and bananas, were loaded onto the Sara Elena destined for Rotterdam, the Netherlands. The vessel was in port for just under nine hours, including the obligatory first call celebrations.This successful call once again validates the opportunity to serve Costa Rica’s economy with larger vessels.

A regional workshop organized by International Maritime Organization (IMO) has provided senior maritime administration officials in Latin America with the latest information on current and future developments at the Organization.The workshop for the regional maritime authorities networks, ROCRAM and ROCRAM-CA was held at IMO Headquarters in London (26 November) in the margin of the 31st IMO Assembly.The 28 participants received detailed information about the activities within…

The total freight volume handled by Port of Antwerp rose from January through September 2019 by 1.1% compared with the same period last year. The container volume (in TEU) was up by as much as 6.4%.However the slowdown in the world economy reduced the growth rate of more volatile trade flows such as conventional break-bulk, liquid bulk and vehicles. On the other hand the volume of dry bulk such as scrap metal, minerals and coal soared by 9.5%, further propelling the overall freight…

In just six months since the inauguration of the new Moín Container Terminal (MCT) in Costa Rica, highly-trained employees are meeting all productivity KPIs outlined in the concession contract.By reducing berthing times to an average of just 10 hours per vessel, the Terminal has been able to create an additional berthing window for a new direct service to Shanghai, China.The first ship on this new commercial route arrived from Houston on Sunday, 22 September, leaving on Monday laden with Costa Rican pineapples, bananas, meat and orange juice.

International Maritime Organization (IMO), with support from Malaysia, has given fresh impetus to an important regional network helping to promote women in the maritime community in Latin America.At a meeting in Colombia, (18-20 September 2019), the network of Women of the Maritime Authorities of Latin America (MAMLa) was put on a firm foundation. Maritime Authorities include Argentina, Brazil, Bolivia, Costa Rica, Chile, Colombia, Cuba, Dominican Republic, Ecuador, El Salvador…

Swiss-based shipping line MSC Mediterranean Shipping Company is improving trade links between Costa Rica and northern Europe by adding a new direct call from the Port of Moin.The container shipping that operates in all major ports of the world said in a press release that MSC Katya R. has become the largest vessel to call Moin Terminal in Costa Rica, launching a new era in cargo shipping for the port and for exporters using its facilities.MSC’s service will bring larger container…

$1B Container Terminal for Costa Rica

A consortium of Van Oord and BAM International completed the construction of the APM Terminals Moín in Costa Rica. Last week’s inauguration of the container terminal will enable products to be shipped on transatlantic routes to European and Asian markets without transshipment.The project represents a total investment of $1 billion and is built on a 40-hectare artificial island. The terminal has a 650-m long quay wall and a container yard with the capacity to hold 26,000 TEUs (Twenty-foot Equivalent Units), including power connection capacity for 3,800 refrigerated containers.

The inauguration of APM Terminals Moín, Costa Rica yesterday will enable products to be shipped on transatlantic routes to European and Asian markets without transshipment.The new terminal will also move Costa Rica to number one for connectivity, out of 139 countries ranked by the World Economic Forum, said a press release from the international container terminal operating company headquartered in The Hague, Netherlands."At APM Terminals we partner with governments to become the best port operator in the world and Moín is a great example.

APM Terminals Inland Services in Costa Rica has worked closely with one of the world’s largest producers and exporters of tropical fruit.The Hague-based international container terminal operating company  said in a press release that among other things, the solution has helped optimize the flow of containers to fruit plantations on the Caribbean coast, increase efficiency and lower reefer inventory.With a large number of refrigerated containers (reefers) being shipped to global markets by Costa Rican tropical fruit exporters…

The ship Balao docked at Verbrugge Terminals in Vlissingen, in North Sea Port, carrying a cargo of fruit. This was the first ship to arrive as part of this logistical service provider's first permanent intercontinental shipping line.The ship was carrying fruit such as bananas and pineapple, among other things. In this line, goods will be loaded in Cartagena and Santa Marta, Colombia and in Puerto Limón, Costa Rica. From South America, the ships will then sail to the European ports of London…

The EU Commissioner for transport, Violeta Bulc, visited the Port of Los Angeles as part of a longer mission to the US and Costa Rica on Thursday 27 September.The European Sea Ports Organisation (ESPO) was invited to support the visit and contribute to the roundtable discussion  with Violeta Bulc, Gene Seroka (CEO of the Port of Los Angeles), Santiago Garcia Mila, (Deputy Director General, Port of Barcelona), Jens Meier (President of the Port of Hamburg), Victor Schoenmakers (Director Corporate Strategy, Port of Rotterdam).

APM Terminals’ Moín Container Terminal (MCT) in Costa Rica has been granted permission by the National Council of Concessions (CNC) to start commercial operations at its first deep-sea berth. This is a key step for the terminal, which is on schedule to be fully operational in February 2019.The permit, which is subject to meeting all safety and service requirements, will enable the transfer of all commercial container ships currently serviced at Puerto Limón and Puerto Moín to the MCT.

Vehicle imports and exports at Port Canaveral revved up this week with the arrival and departure of the post-Panamax (PPX) shipping vessel Höegh Trotter and another RO/RO vessel, the NYK Auriga Leader. In a first for the port, one vessel discharged new autos while another exported vehicles.Höegh Autoliners’ massive Höegh Trotter, the third PPX vessel to visit the Port, discharged new autos at the 16-acre AutoPort Canaveral, LLC facility as the nearby Auriga Leader loaded vehicles…

With this latest delivery of cranes, the APM Terminals Moin remains on schedule for completion in February 2019, when it is expected to raise commerce in Costa Rica by 23% according to Qbis Socioeconomic Impact Study. This second delivery of Ship-to-Shore and Electric Rubber-Tire Gantry Cranes (ERTGs) to APM Terminals Moin, Costa Rica brings the total on site to six and 23 respectively. The commissioning of the equipment was completed this week. “APM Terminals Moin is proud to celebrate this milestone… 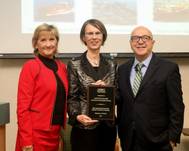 Port Manatee holds promise as a trade gateway for German companies, according to Germany’s Miami-based consul general, who visited the Florida Gulf Coast port Thursday [March 15]. “Port Manatee is an important part of Florida infrastructure,” said Annette Klein, Germany’s consul general for Florida, Puerto Rico and the U.S. Virgin Islands. “As German companies look for a U.S. port to meet their needs, it is important for us to be aware of such ports and their capabilities and objectives.

SAAM to Invest $85 Mln in Fleet and Infrastructure

Chilean maritime services and logistics company SAAM announced its plans to invest some $85 million to reinforce its tug fleet and maintain port equipment and infrastructure. "In 2018, we expect to invest close to $85 million, which will be used to maintain our port equipment and infrastructure and reinforce our tug fleet. This could also include inorganic growth opportunities that we are constantly evaluating,” commented SAAM’s chairman, Óscar Hasbún. After concluding a high investment cycle last year, the company’s investments this year will focus on ports and its tug fleet.