China's Wuhan University of Technology (WUT) has partnered with Navis to implement the MACS3 ship loading computer and the Navis StowMan stowage planning program as educational software. In the future, prospective nautical officers will learn loading and unloading operations for container ships and bulk carriers in the segment of 76,000 dwt to 300,000 dwt (very large ore carrier), with on-board planning support provided by the MACS3 stability program from Navis. In addition, students will use the shore-side stowage planning software… 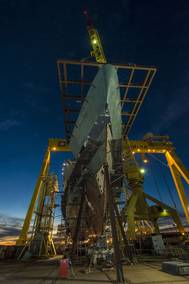 Huntington Ingalls Industries (HII) announced today that its Ingalls Shipbuilding division has awarded nearly $108,000 in grants for 25 different projects from schools and educational organizations in Alabama, Mississippi and Louisiana. The grants, which were requested by all of the organizations, will be used for projects associated with science, technology, engineering and mathematics (STEM). This is the sixth year for Ingalls' STEM program. The company has awarded more than $500,000 for STEM-related projects during that period.

The Department of Defense award Metron Inc. a contract for development of a large displacement unmanned undersea vehicle (LDUUV). Metron, Inc., of Reston, Va.,is being awarded a $7,287,619 cost-plus-fixed-fee contract  to include in-lab integration and testing of autonomy and mission planning software with bench test hardware selected for deployment on the LDUUV. This one-year contract includes two, one-year options which, if exercised, would bring the potential, cumulative value of this contract to an estimated $18,317,018.

“Safety and environmental protection is our greatest priority and OCIMF members see fatigue as a significant contributory factor to many incidents that occur within the shipping industry” explained OCIMF Director, Captain David Cotterell. “These recommendations set out our minimum expectations, which we hope that shipping companies will take into account to achieve compliance with IMO and ILO rules, prevent fatigue and reduce fatigue related incidents,” David Cotterell added.