Commodity trader Gunvor Group will charter a liquefied natural gas (LNG) carrier from shipping firm Flex LNG for up to 10 years, the two companies said on Monday.Geneva-based Gunvor, which has said it wants to take a lead in energy transition by investing in cleaner natural gas, last year became the biggest trader in the burgeoning LNG market.The initial contract is for five years, with options to extend to 10, the firms said. The vessel, with capacity to transport 173,400 cubic meters of LNG… 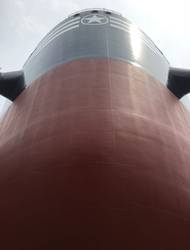 Norway-based shipowner 2020 Bulkers announced that the time charters of two of its vessels with the global commodity trader Koch Supply and TradingUnder the new deal, the dry bulk shipping company vessels Bulk Santiago and Bulk Seoul will continue working for Koch for another 11-13 months at an index linked rate reflecting a significant premium to the Baltic 5TC index.The time charters also include a sharing of the economic benefit from the scrubbers from January 1st, 2020, with the majority of the benefit accruing to 2020 Bulkers.As part of the agreement…

Dutch energy and commodities group Vitol and South Korea's H-Line Shipping have executed a 10-year time-charter agreement for a newbuild, latest generation LNG carrier.The commodity trader said that the 174,000m3 vessel with XDF propulsion is to be built at Korea’s Hyundai Samho Heavy Industries (HSHI) and is due for delivery in late 2021.Vitol also holds extension options and the ability to exercise additional LNG carriers to support its further growth in the LNG industry through this partnership with H-line.Pablo Galante Escobar…

Commodity trader Trafigura had leased 35 newly built crude oil and oil product tankers from an undisclosed Asian financial partner with the vessels expected to be delivered late this week and all through 2019, the company said."Until 2020, the vessels will run on regular fuel, and from then onwards, whenever allowed (some ports do not allow usage of open loop scrubber), they will burn high sulphur fuel oil, which is possible due to the scrubber onboard each vessel," a company spokesman told Reuters on Friday.The tankers…

The commodity trader Noble Group has entered into an agreement with Aeolian Spirit Shipping, a Cyprus company, to dispose a vessel registered in Hong Kong for a consideration of US$23.79 million. Noble said in a press annoucement that its indirect wholly-owned subsidiary, Core Forte, had on June 15 entered into a memorandum of agreement with Aeolian Spirit Shipping and Transmed Shipping for the proposed sale of a Kamsarmax dry bulk carrier vessel. The Vessel “Ocean Forte" is registered under the flag of Hong Kong. It was built in 2015 and has a capacity of 81,616 dwt.

Struggling commodity trader Noble Group Ltd said it would sell to Bianca Corp a Kamsarmax dry bulk carrier for $24 million in cash. The Hong Kong registered ship has a capacity of 81,499 deadweight tons. Built in 2015, the vessel, Ocean Integrity, is employed to service external customers as well as Noble Group's internal freight requirements. "The consideration for the Proposed Disposal shall be US$24 million payable on completion of the Proposed Disposal and will be satisfied in cash.

The commodity trader Noble Group says proposed agreements to sell four dry bulk carrier vessels fell through after the buyers failed to get approval from their boards, reports Strait Times. The disposal of the freight vessels for gross proceeds of about USD 95 million had been approved by Noble shareholders at a special general meeting on Jan 25. The crisis-wracked company estimates it would have received about USD 30mln in net proceeds if the vessels had been sold. The proposed disposal of the vessels is a part of the Noble’s debt reduction plans.

U.S. natural gas producer Cheniere Energy Inc said on Tuesday Singapore-based commodity trader Trafigura Pte Ltd would buy about 1 million tonnes of natural gas per year from its unit for 15 years, starting 2019. The agreement with Cheniere Marketing, LLC would help the Houston-based company to fund its expansion plans, Chief Executive Jack Fusco said. The company has been expanding its presence in Asia to benefit from the rising demand for liquefied natural gas from the region.

Trading house Trafigura has hired Dan Stirk, formerly a North Sea crude oil trader at commodity trader Noble Group, to join its crude desk, according to trading sources. Stirk started his new job this week, one of the sources said. He served as North Sea trader at Noble starting in July 2016, according to his LinkedIn page. The move comes after Chinese trader Unipec hired three former Noble employees to join its middle distillates desk in London. Reporting by Ahmad Ghaddar

Global commodity trader Cargill Inc on Wednesday said it turned in a quarterly net profit, boosted by special gains that offset poor results from trading and oilseed processing. Revenue for the privately held company declined for the eighth straight quarter. Minnesota-based Cargill reported net income of $15 million for the fourth quarter ended May 31, compared with a net loss of $51 million a year earlier. Revenue fell 5 percent to $27.1 billion. Excluding items such as inventory adjustments and gains or losses from sales of assets…

Five oil product traders have resigned from Noble Group, Asia's biggest commodity trader by revenue, some of whom are moving to rival trader Glencore, sources with knowledge of the issue said. Three of Noble's London-based gasoline traders are joining Glencore, according to the sources. The status of two other traders was not immediately clear. Noble had also subleased storage tanks in the key Amsterdam-Rotterdam-Antwerp area to another competitor, trading house Gunvor, another source said. Noble, Glencore and Gunvor declined to comment.

The Egyptian Natural Gas Holding Company (EGAS) has reportedly failed to secure two cargoes for delivery in April, says a report in Reuters. The tender launched during last week was open to EGAS’ existing suppliers, however, delivery windows of April 1-7 for the first cargo and April 27-28 were difficult to arrange due to a short period notice. Traders said the first delivery window was difficult to arrange given the short notice period. For the late-April cargo, EGAS lined up commodity trader Trafigura as the supplier…

Swiss-based commodity trading house Gunvor opened this month a new trading office in Shanghai dedicated to Chinese domestic business, the company on Tuesday, as it aims to expand its presence in Asia. Gunvor China Trading Ltd, set up in the Shanghai Free Trade Zone, will initially focus on trading base metals, coal and iron ore and will at a second stage trade petroleum products too, the firm said. Shanghai, will be the company's fifth trading office, joining existing desks in Geneva, Singapore, Nassau and Dubai.