Japanese shipping giant Kawasaki Kisen Kaisha (K Line) has taken delivery of a 88,000 dwt coal carrier from compatriot shipbuilder Imabari Shipbuilding in Marugame.Named Corona Citrus, the vessel was delivered on September 11 for electric utility Electric Power Development Co. Ltd.The new Corona coal carrier will be principally involved in carrying thermal coal to thermal power plants for the company.Corona Citrus is equipped with WAD (Weather Adapted Duct) in front of the propeller which promotes her propeller efficiency and Hybrid Fin behind the propeller which accelerates energy savings…

Mitsui O.S.K. Lines (MOL) announced that it participated in a demonstration test of ship class survey using aerial drones to inspect an MOL-operated coal carrier in service, along with Nippon Kaiji Kyokai (ClassNK), Hitachi Systems, and Mitsui Co.According to MOL, the demonstration test included a simulated ship inspection inside the cargo hold and ballast tank (which holds water used to balance the ship when it is not carrying cargo), using video shot from an aerial drone.The test verified the effectiveness of using drones to monitor rust…

Mitsui O.S.K. Lines (MOL) has announced the delivery of the coal carrier OI MARU, which will serve JERA Trading , was delivered at Imari Shipyard and Works of Namura Shipbuilding on June 14, 2018. The vessel, which was jointly developed by Namura Shipbuilding and MOL, is a state-of-the-art coal carrier with a wide-beam/shallow-draft configuration and wide range of advanced safety and energy-saving features. The vessel is so-called "Hekinan MAX" which has characteristic 250 meters length to maximize transport volume to the discharging port…

Kawasaki Kisen Kaisha (“K” Line) is proud to announce the delivery of “Corona Xanadu,” an 88,000 DWT-type special coal carrier at Shin Kasado Dockyard of Imabari Shipbuilding Group Japan on May 23, 2018. Corona Xanadu is same type as “K” Line’s specialized fleet for transport of thermal coal known as the “Corona-series”. The Corona-series consists of epoch-making coal carriers equipped with wide beam and shallow draft, which are the most suitable type to enter ports of domestic Thermal Power Stations to discharge cargo.

Japanese shipping major Mitsui O.S.K. Lines (MOL) has signed an agreement for the construction of an LNG-fueled tugboat with Kanagawa Dockyard. The construction is slated to start in February 2018 and complete in February 2019. Launching is scheduled for April of the same year. This deal marks MOL's first ownership of a tugboat powered by LNG-fuelled engines and it will be the first LNG-fuelled tugboat in Japan conforming to the IGF code. It is also Japan's first LNG-fuelled tugboat with the LNG fuel tank mounted on the exposed deck at the stern of the ship.

Mitsui O.S.K. Lines announced that MOL, Tohoku Electric Power Co and Namura Shipbuilding have jointly earned an Approval in Principle (AIP) from Lloyd's Register for the design of an liquefied natural gas (LNG) powered coal carrier. The three companies have moved ahead with this project and recently conducted a Hazard Identification Study (HAZID), and finished the basic design. MOL noted that the AiP marks Japan's first jointly obtained by three companies - a shipping company, cargo owner, and shipbuilder - for a vessel powered by LNG.

Japan’s port of Matsuyama welcomed NYK-operated M/V Nord Neptune, the first panamax coal carrier to visit the port, on June 10, 2017. The Ehime prefectural government and the Shikoku Regional Development Bureau of the Ministry of Land, Infrastructure, Transport and Tourism recently completed an international logistics terminal project to reconstruct the port by deepening the berth to 13 meters. To help the berth accept large vessels, NYK provided technical support through Sumiseki Trading Co. Ltd. which operates a coal center at the port.

A heritage committee of the UNESCO cultural agency stopped short of placing Australia's Great Barrier Reef on an "in danger" list, but the ruling on Friday raised long-term concerns about its future. The long-awaited ruling by UNESCO's World Heritage Committee welcomed Australian efforts to maintain the environmentally sensitive region but noted its outlook was "poor" and called on the government to stick rigidly to commitments to protect it. "Climate change, poor water quality and impacts from coastal development are major threats to the property's health...…

Mitsui O.S.K. Lines, Ltd. today announced the delivery of the coal carrier Shin Yahagi Maru, which will serve Chubu Electric Power Co., Inc. The vessel was delivered at Imari Shipyard and Works of Namura Shipbuilding Co., Ltd. on January 22, 2015. The vessel, which was jointly developed by Namura Shipbuilding and MOL, is a state-of-the-art coal carrier with a wide-beam/shallow-draft configuration and wide range of advanced safety and energy-saving features. The vessel is so-called “Hekinan MAX” which has characteristic 250 meters length to l maximize transport volume to the discharging port… 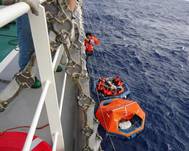 While steaming some 700km west of Guam on January 20, Mitsui O.S.K. Lines, Ltd. operated coal carrier C. S. Sunshine rescued all 24 Chinese crew members of a disabled freighter January 20. At 8:15 a.m. (local time) on January 20, the Panama-registered C.S. Sunshine, which departed Newcastle, Australia, bound for Tsuruga, Fukui Prefecture, Japan, received a distress signal from a Panama-flagged freighter that had lost power. The 46,700 MT, 228.4m C.S. Sunshine, manned with two Japanese and 19 Filipino crew, immediately altered course and made for the distressed vessel at all possible speed.

Captain Robert M. Cusick Jr., a merchant marine officer who survived the wreck of the SS Marine Electric and then helped lead a major reform of US maritime safety standards, died peacefully in his sleep in New Hampshire on Thursday, September 12, 2013, according to Carol Cusick, his daughter. He was 90 years old. Against the advice of many friends and colleagues, Captain Cusick testified at a US Marine Board of Investigation and detailed how inspectors and company officials overlooked numerous holes in the hatches…

NYK bulk coal carrier resumes direct shipments to earthquake-damaged port of Haramach. The 90,000 dwt NYK-operated bulk carrier “Haramachimaru” filled with coal has arrived at a dedicated port for a thermal power station operated by Tohoku Electric Power Co. Inc. This was the first arrival of a coal carrier at the berth since the Great East Japan Earthquake last year. The berth is located in the town of Haramachi, and wharf operations restarted as the power station became operational again. A total of 89,000 tons of coal from Newcastle, Australia, was unloaded from the vessel, Haramachimaru.

Salvage experts successfully refloated the freighter 'Paul R. Tregurtha' from downbound channel St. Mary's River. Two tugs with a combined 4,000 horsepower, moved the stern of the ship into the middle of the channel. This enabled salvage experts to successfully raise the ship’s bow by filling stern voids which reduced the amount of forward weight on the rocks. The vessel was cleared to proceed to anchorage near Detour, Mich., where the owners, the Coast Guard marine inspectors…

US Coast Guard responds to grounding of 1000-ft long freighter hard aground in downbound channel of St. Mary's River. The vessel is carrying approximately 62,000 tons of coal. The motor vessel Paul R. Tregurtha, owned by Interlake Shipping Company of Ohio, grounded on the west side of Neebish Island in the vicinity of what is commonly known as the “Rock Cut.” Initial reports indicate there is no resultant pollution and no injuries were reported, but there is some damage to the ship. The freighter’s stability is currently unaffected.