SKF has extended its BlueMon environmental monitoring and mapping system to meet the maritime emission requirements of MARPOL 73/78 Annex VI. As the number of Emission Control Areas (ECAs) grows, and limits become stricter, ship operators are finding it increasingly difficult and time-consuming to stay compliant. With the amendment of Annex VI of MARPOL 73/78 coming into force in January 2020, there is now even more reason to adopt SKF BlueMon’s automated approach to compliance. The existing SKF BlueMon product already focusses on Annex I.

Silverstream Technologies, makes of air lubrication technology for the shipping industry, signed a contract with a major cruise line to retrofit its proprietary Silverstream System on one of its vessels. The Silverstream System will be retrofitted onto the vessel in 2017. Extensive performance analysis of data from Silverstream’s original sea trial funded by Shell confirmed consistent net efficiency savings in excess of 4% and up to 8% for larger vessels. “There is a real demand from the cruise sector for clean technologies that are cost effective…

The ports of Long Beach and Los Angeles are partnering with shipping company Maersk Line to measure the environmental benefits of a $125 million upgrade for 12 Maersk containerships. The initiative will involve the installation of high-tech equipment to track vessel emissions and energy efficiency over the next three years, enabling more transparency and ultimately reducing the environmental impact of vessels calling at the San Pedro Bay port complex. The two ports are contributing…

The Sustainable Shipping Initiative (SSI) is calling on the wider industry to embrace new finance models to fund clean tech upgrades and back calls for a new international framework for tackling shipping emissions. SSI has announced the release of the organization's latest annual report - the document suggests that while there are significant short-term challenges around International Maritime Organisation (IMO) and COP 21 meeting requirements, progress is happening. SSI, which represents 17 firms from across the shipping sector including Bunge… 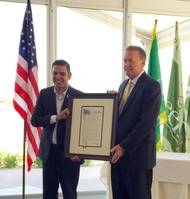 Shipping lines, environmental organizations, trucking companies, terminal operators and a railroad were honored today, July 29, by Long Beach Mayor Dr. Robert Garcia and the Port of Long Beach at the annual Environmental Achievement Awards. The awards are an outgrowth of the groundbreaking Green Port Policy, the Port’s commitment to improving the environment. Approved in 2005 by the Long Beach Board of Harbor Commissioners, the policy put the Port on the path to become a world leader in environmental stewardship. 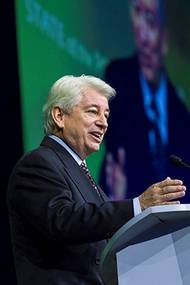 In his first-ever State of the Port address, Port of Long Beach Chief Executive Jon Slangerup on Thursday unveiled plans for congestion-beating smart systems for cargo movement and an all-out push to achieve energy resilience for port operations with wind turbines, solar cells and other clean technologies. Speaking to an audience of nearly 900 at the Long Beach Convention Center’s Pacific Ballroom, Slangerup summed up the Port of Long Beach’s achievements in 2014 then gave his expectations for 2015 and beyond, setting high goals for himself and the port.

Port of Long Beach Chief Executive Jon Slangerup on Thursday unveiled ambitious plans for congestion-beating smart systems for cargo movement and an all-out push to achieve energy resilience for port operations with wind turbines, solar cells and other clean technologies, in his first-ever “State of the Port” address. Speaking to a record audience of nearly 900 at the Long Beach Convention Center’s Pacific Ballroom, Slangerup summed up the Port of Long Beach’s achievements in 2014 then gave his expectations for 2015 and beyond, setting high goals for himself and the Port.

A 'Creating Climate Wealth Summit Germany' hosted by Carbon War Room aims to accelerate clean technology adoption. Over 90 percent of the world’s trade cargo spends time on the ocean during its journey to market, carried by any one of approximately 60,000 active commercial vessels. Although the shipping industry, relative to other freight modes, is already very energy efficient, the widespread adoption of additional market-scale clean technologies which improve hull, engine and propeller design will produce further reductions in fuel consumption.