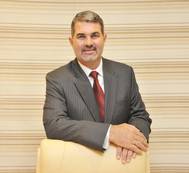 ASRY, a ship and rig repair yard in the Arabian Gulf, has appointed Nils Kristian Berge, the current Commercial General Manager, as Acting Chief Executive, to succeed Chris Potter, who leaves the company in October 2013. The ASRY Board of Directors confirmed the transition has been planned for several months in order to ensure a smooth and seamless transfer of responsibilities. Shaikh Daij bin Salman Al Khalifa, Chairman of the Board of Directors of ASRY commented, “With new expansions and diversifications now completed and integrated at the yard under Mr.

The Kingdom of Bahrain’s Arab Shipbuilding & Repair Yard Co (ASRY) has turned in a profitable first quarter of 2012 despite the continued shipping recession and increased competition in the region. As of the beginning of May ASRY was running at close to capacity and had work in hand for the next 12 weeks. This, says CEO Chris Potter, is quite some achievement in a region which already has plenty of repair capacity, even before two major new repair facilities opened for business recently in Qatar and Oman.

While small in stature at just 760 sq. km. with a population of 1.2 million, the Kingdom of Bahrain, an archipelago in the Persian Gulf just east of and connected by causeway to Saudi Arabia, seeks to grow its stature in the world marine market to become a global maritime and logistics center by 2030. The Arab Shipbuilding & Repair Yard Co. (ASRY), which is central to this success, last month celebrated several key milestones, including the anniversary of its 35th year in business and the opening of its new 1.38km Repair Quay Wall…

As Bahrain’s Arab Shipbuilding & Repair Yard Co (ASRY) celebrates its 35th Anniversary, this week the company officially inaugurated and opened for business its new 1.38km Repair Quay Wall. The official inauguration of the new Repair Quay Wall is not just a significant event for ASRY but also for Bahrain’s fast growing maritime sector and economy, and is a strong signal of the yard’s intent to enter more vigorously the business in the offshore and rig outfitting niche. Since starting life in October1977 as the Middle East’s first shipyard designed specifically for the repair of Super Tankers…