Japanese shipping company Kawasaki Kisen Kaisha (K Line) has ordered two liquefied natural gas (LNG) carriers with  with Hudong-Zhonghua Shipbuilding backed by long-term contracts with Malaysia's energy giant Petronas.The 12-year contract to charter them to Petronas starts in 2022, with an option for an extension for a further 12 years.The two vessels will be built by Hudong–Zhonghua Shipbuilding , a wholly owned subsidiary of China State Shipbuilding Corporation, the largest shipbuilding group in China…

The largest shipbuilding group in the world, China State Shipbuilding Corporation (CSSC), has entered into a new strategic partnership with DNV GL, the international accredited registrar and classification society headquartered in Høvik, Norway.A framework agreement between both parties was signed by Qian Jianping, Vice President of CSSC, and Norbert Kray, Regional Manager for Greater China at DNV GL – Maritime. The ceremony was witnessed by Remi Eriksen, Group President & CEO of DNV GL…

Taiwanese shipping line Evergreen has confirmed its plans to build a total of ten 23,000 TEU containerships.According to a stock exchange filing, the new vessels would be built at three shipyards  in South Korea and China.According to the reports from the South China Morning Post, the enormous order will cost Evergreen anywhere between US$1.4 billion and US$1.6 billion. It is estimated that each vessel will cost between $140 million and $160 million.The new vessels could see Evergreen become the sixth biggest carrier line in the world…

LNG Carriers to 'Sail on Air'

Silverstream Technologies, an air lubrication manufacturer for the shipping industry, signed a Memorandum of Understanding (MoU) with Hudong-Zhonghua, part of the CSSC Group, which will see the Silverstream System integrated into Hudong-Zhonghua’s new building designs for its future LNG carriers in order to increase operational and fuel efficiencies.The system is said to help reduce fuel costs and emissions by between 6% and 8%.Hudong-Zhonghua is a subsidiary of the China State Shipbuilding Corporation (CSSC), China’s largest shipbuilding group, and the second largest in the world.

CMA CGM chairman and CEO Rodolphe Saadé has signed two strategic partnerships with Lei Fanpei, chairman of the China State Shipbuilding Corporation (CSSC), including an order of 10 containership newbuilds, as well as an agreement to jointly develop more efficient and environmentally-friendly vessels.The deals were signed Monday in the presence of French President Emmanuel Macron and Chinese President Xi Jinping, on the occasion of the latter’s State visit to France.The 10 new Chinese-built 15,000-TEU (Twenty-foot Equivalent Units) vessels will each measure 366 meters long.

Danish shipping company TORM has established a joint venture with scrubber manufacturer ME Production and Guangzhou Shipyard International (GSI).The joint venture, ME Production China, will manufacture and install scrubbers in China and deliver them to a range of maritime industry customers for both newbuildings and retrofitted vessels, said a press release from the carriers of refined oil products. TORM holds an ownership stake of 27.5% in the new joint venture. GSI is part of…

Swire Group’s shipping arm China Navigation Company establishes presence in Shanghai where it was founded 147 years ago!The China Navigation Company (CNCo) opened its China headquarters officially in Shanghai on 05 November 2018, marking a significant return to its birthplace 147 years ago, and a significant milestone in its history, said a press release from the company.CNCo started operations on the Yangtze River in 1872, operating a modest fleet of Mississippi-style paddle steamers.CNCo is a major global player in the shipping scene today… 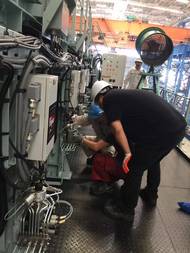 French shipping group CMA CGM plans to build nine of the world's largest container ships at two Chinese shipyards, the China Daily newspaper reported on Wednesday. Shanghai Waigaoqiao Shipbuilding Co confirmed that it and its sister yard Hudong-Zhonghua Shipbuilding (Group) Co, had received a letter of intent from CMA CGM for the ships, which would be capable of carrying 22,000 20-foot equivalent unit containers (TEU), the newspaper said. The final order was subject to board approval from both sides, the newspaper said. Both yards are owned by state-run China State Shipbuilding Corporation.

China State Shipbuilding Corporation (CSSC) said it has formally launched a new business CSSC Marine Service Co., Ltd, to coincide with the inauguration of its new logistics center within the Yangshang free trade zone, Shanghai. The inauguration was marked with a ceremony on June 30, 2017, attended by more than 150 industry representatives from ship owning, managing and operating companies, along with key cooperation partners ABB, MAN PrimServ and WinGD. Able to accommodate more than 20…

The SENER Group division in Shanghai held a 50th anniversary celebration of FORAN system where it also presented its new version V80. More than 100 attendees from 40 companies including shipyards, design offices, classification societies, universities and partners attended the event. The event received endorsement from Embassy of Spain and CDTI (Spain’s Centre for the Development of Industrial Technology) with participation of representatives. The Economic and Commercial Consul from Economic and Commercial office in Shanghai of Embassy of Spain…

Wärtsilä Strengthens Its Position in China with New Propulsion Orders

Two new marine geological research vessels under construction in China will feature a broad scope of Wärtsilä engines and propulsion equipment. Wärtsilä has maintained a leading position in China for supplying propulsion solutions to research vessels. Since 2011, more than 70% of the research vessels built in Chinese yards have been fitted with Wärtsilä products. These latest contracts were placed with Wärtsilä in September. The new vessels are being built at the Shanghai shipyard of CSSC (China State Shipbuilding Corporation) and the COSCO shipyard in Guangdong…

Naftomar Shipping And Trading Co. Ltd. Inc., which is engaged in shipping and trading liquid petroleum gas, contracted China’s Jiangnan Shipyard to build two Very Large Gas Carriers (VLGC), say local media reports. The Voula, Greece-based company has ordered one 84,000 cu m , with an option to construct one more. Other contract details, financial details of the deal and the delivery date of the ship  were not revealed. According to Jiangnan Shipyard this is their first working relationship with Naftomar.

The world leading shipping group CMA-CGM has fitted its largest containership, the 18,000 TEU Vasco de Gama, with a 2,000 cu.m/h Bio-Sea 2000 Ballast Water Treatment System (BWTS) supplied by French ballast water treatment specialist Bio-UV. The Vasco de Gama is equipped with the latest environmental technologies, and the BIO-SEA2000 BWTS representing therefore one of the greenest goods transport means in the world. The Bio-Sea system uses filtration and high power UV to treat ballast water without requiring any chemicals. The U.K.-flagged Vasco de Gama has a length of 399 m and beam of 54 m.

A large container ship produced by Shanghai Waigaoqiao Shipbuilding Co., Ltd. was delivered to leading French container shipping group CMA CGM on Saturday in Shanghai, reports Xinhua. The vessel is named "Zheng He" after the famous ancient Chinese navigator. Its a 18,000-TEU container ship, designed by China State Shipping Corporation. Zheng He is the largest China has ever made and its deck is as large as four soccer fields, the producer said. The ship is a seventh-generation container ship, manufacturing of which has long been monopolized by the Republic of Korea.

Shanghai Shipyard has won bids to build two multipurpose survey vessels for two geological survey institutes. The shipyard is an affiliate of China State Shipbuilding Corporation (CSSC).   Qingdao Marine Geological Survey Institute and Guangzhou Marine Geological Survey Institute have each ordered one geological survey vessel at the yard.    Financial details and the delivery dates of the newbuildings were not disclosed.   CSSC said the bids were won after fierce competitions with more than 10 shipyards competing including Wuchang Shipbuilding Industry and Cosco Shipyard.

Southern African Shipyards (SAS) has entered into a Memorandum of Understanding (MOU) with China Shipbuilding Trading Company (CSTC), a subsidiary of China State Shipbuilding Corporation, in a union between the largest shipyard in Southern Africa and the largest shipbuilding group in the world. Operation Phakisa was launched by President Jacob Zuma in 2014. One of its two key focus areas is to develop South Africa’s maritime economy in sectors such as marine transport and manufacturing and offshore oil and gas.