With the aim to dominate maritime industry China has been acquiring overseas ports with huge investments which crossed USD 20 bln last year, Financial Times reported. Beijing has spent billions expanding its ports network to secure sea lanes and establish itself as a maritime power, says the report. China is aggressively pushing its  “One Belt One Road”, a grand scheme to win diplomatic allies and open markets in around 65 countries between Asia and Europe. It is pushing ahead with plans to open new shipping routes through the Arctic circle, the report said.

Chinese Shipping Major Cosco Group has agreed in principle to buy its shipping rival and  Hong Kong’s No. 1 box mover, Orient Overseas Container Line (OOCL), in deal that could be valued around USD 6.3 billion. The takeover will catapult Cosco the world’s third-biggest container carrier after Denmark’s Maersk Line and Swiss-based Mediterranean Shipping Co. In a press release, the State-owned Cosco said that it will pay shareholders of OOCL,, HK$78.67 a share in cash, a 31 percent premium over the stock’s last closing price.

Sino-Global Shipping America, a non-asset based global shipping and freight logistic integrated solution provider,  has announced the signing of an Inland Transportation Agreement  with COSCO Beijing International Freight Co in which COSFRE Beijing will utilize the Company's full-service logistics platform to arrange for the transport of its container shipments into US ports. In addition to the Agreement with COSCO Beijing, the Company has entered into a Strategic Cooperation Framework Agreement with Sinotrans Guangxi, a subsidiary of Sinotrans Limited.

EU antitrust regulators accepted on Thursday an offer from Maersk, the world's largest container shipping liner, and 13 other competitors to change their pricing practices. The companies agreed to publish binding actual rates 31 days before they go into effect, with the figures acting as a price ceiling. Under the current system, they only publish the amount of the increase, not the final price. The other 13 firms are No.2 player MSC, No. 3 CMA CGM, Germany's Hapag Lloyd and Hamburg Sud…

Cosco Pacific Ltd. has appointed Zhang Wei as vice chairman and managing director, replacing Qiu Jinguang who has stepped down from the positions with immediate effect, reports Dow Jones. "Qiu Jinguang has resigned as an Executive Director, the Vice Chairman and Managing Director and also resigned as an authorised representative as well as the Chairman of the Executive Committee, the Investment and Strategic Planning Committee and the Risk Management Committee, and a member of the Nomination Committee and the Remuneration Committee due to work commitments…

China Cosco Shipping plans to retain its current container alliances until they expire, after which it plans to sign a new deal, it said on Monday. The group's spokesman, Yu Zenggang, did not say when the current alliance agreements were due to expire. China COSCO , a unit of COSCO, is part of the CKYHE alliance with Kawasaki Kisen Kaisha, Yang Ming Marine Transport, Hanjin Shipping and Evergreen Marine, while China Shipping Container Lines , a unit of China Shipping Group, CMA CGM CMACG.UL and United Arab Shipping Co make up the Ocean Three alliance.

Off the coast of a nearly deserted island below the southern tip of Hong Kong, at least 10 massive ships that normally carry hundreds of thousands of tons of coal or iron ore lie idle near one of the world's busiest sea routes. These empty vessels paint a grim picture for the dry bulk shipping business that veterans of the industry say is grappling with an unprecedented crisis of too many ships and not enough cargoes. The hollow boats underscore the global economic doldrums that policymakers are struggling to overcome. "This is the worst we have seen in recent times.

Fifteen container liner shipping companies "have offered to change their pricing practices to settle an EU antitrust probe and stave off possible fines," according to a report from Reuters Wednesday that cites two unnamed sources. Container carriers have offered to publish binding actual rates a month before they go into effect, according to the report from. The report said the European Commission would not confirm the development, but that it could change the practice of shipping companies announcing planned general rate increases. World No.

After acquiring control of Greece's Piraeus Port Authority SA, China Ocean Shipping (Group) Company (COSCO), is now bidding to run the port of Limassol on the island of Cyprus, in a bid to extend its reach in the Mediterranean Sea. A total of 14 companies have submitted bids for the commercialisation of Limassol port, the Cypriot Ministry of Transport, Communications and Works announced. Among the bids, six submissions were received for the container terminal, three for the marine services and five for the multipurpose terminal. 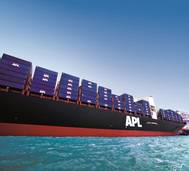 Two Chinese shipping giants are likely to sign agreements with Cambodia's Sihanoukville Autonomous Port (SAP), paving the way for exporters to move cargo directly from Cambodia to China, Xinhua reported. Both Cosco and China Shipping are expected to sign with Sihanoukville Autonomous Port (SAP) shortly to commence direct services from Cambodia to China, a route that hitherto has been transhipped via Vietnam. Lou Kimchhun, director general of SAP, said that a rise in the kingdom's…

China's slower growth and economic transition will pose significant risks for the already struggling shipping sector, rating agency Fitch said. The shipping sector is already faces overcapacity, weak freight rates and stretched financials. "Weaker data on exports and manufacturing in China and its economic transition increase uncertainty for container shipping," said Fitch in a report. These pressures will probably lead to bankruptcies among smaller unrated shippers and may drive consolidation.

China has added nine shipyards to its "white list" of firms deemed worth of favourable policy support, as it attempts to tackle overcapacity that has weighed on the global shipping market. In September, it published a list of 51 yards which it later cut to 50. These yards, which it says are judged to comply with requirements such as ship emissions, are expected to get favourable policy support, such as bank credit and export tax rebates. The nine include subsidiaries of state-backed firms China State Shipbuilding Corporation…

China Ocean Shipping (Group) Company (COSCO) plans to launch regular services through the Arctic Ocean to Europe, as global warming makes the route viable and Beijing steps up its northern ambitions, says a report in AFP. Cosco’s Yong Sheng vessel completed its second round trip Arctic voyage between China and Europe in October. It sailed nearly 20,000 nautical miles during the 55-day voyage. The company managers consider the possibilities of normalizing the Arctic shipping route of Yong Sheng, which will decreased the transportation costs and will increase the speed of the loop.

Chinese transport giant China Merchants Group looks set to takeover Sinotrans & CSC in the potential merger between the two shipping giants in China, reports Reuters. The two companies have been locked in reorganization talks, financial magazine Caixin  said, citing sources close to China Merchants. Officials from both companies declined to comment on the talks when contacted by Reuters on Tuesday. Sinotrans & CSC Holdings have announced that the parent group is undergoing strategic restructuring…