The United Nations High Commissioner for Refugees (UNHCR) has sent an appeal to the European governments to allow 507 people recently rescued from the Mediterranean and now stranded at sea to leave the vessels.Many are reportedly survivors of appalling abuses in Libya and are from refugee-producing countries. They are in need of humanitarian assistance and some have already expressed an intention to seek international protection.“This is a race against time,” said Vincent Cochetel, UNHCR Special Envoy for the Central Mediterranean. “Storms are coming and conditions are only going to get worse.

A smartphone application that allows users to scan the Mediterranean for boats in distress is being tested by a migrant rescue service, which hopes that crowdsourced information will help it save more people. The I SEA App, available on iTunes, divides a satellite image of the sea route migrants are taking into millions of small plots which are, in turn, assigned to registered users. Each user then monitors their plot through the app and can send an alert to the Malta-based Migrant Offshore Aid Station (MOAS) and the authorities if they spot potential trouble.

More than 3,770 migrants and refugees died in 2015 trying to reach Europe by crossing the Mediterranean Sea, making the year the deadliest on record for those seeking sanctuary from conflict and poverty, an international migration group said on Thursday. Most of those deaths occurred along a perilous central Mediterranean route used by smugglers operating out of Libya, according to the International Organization for Migration (IOM). The deadliest month was April, when nearly 1… 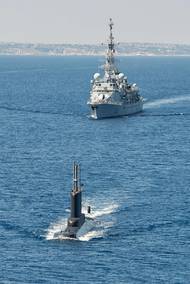 The EMSA-contracted Stand by Oil Spill Response Vessel Salina Bay arrived this weekend on site of the Costa Concordia to assist SMIT Salvage, who is in charge of the bunker removal and pollution response operations. Preparations are on-going for the removal of the bunker oil from the grounded cruise ship Costa Concordia. The Salina Bay will be -as a precautionary measure- on stand-by during this operation over the next weeks. The Salina Bay is equipped with several oil recovery systems, as booms, skimmer, sweeping arms and a dedicated radar slick detection system.