The International Container Terminal Services Inc. (ICTSI) has been declared as the preferred bidder for the development, operations and management of the Port of Kribi in Cameroon for 25 years.Philippine government's  News Agency quoted ICTSI disclosure to the stock exchange saying that: "ICTSI has been declared preferred bidder for the concession of the development, operation and maintenance of the Multi-Purpose Terminal of the Port of Kribi by the Port Autonome de Kribi. Parties…

The ports of Antwerp and Douala in Cameroon are to collaborate closely with each other over the next five years. The collaboration agreement was signed on Wednesday this week during an extensive visit by Antwerp port representatives to the port of Douala in Cameroon. Douala port authority  is counting on the Antwerp know-how in order to boost the efficiency of its port operations, among other things. For Antwerp the agreement represents a way to maintain and further strengthen its position as market leader in West and Central Africa.

Historic Vessel Sets out on its Final Journey

German flag containership the Northern Monument set course for Algeciras, Spain under the Verrazano Bridge with a very special cargo on board. Inside one of the ship's 40' dry box containers is the historic rowing vessel Spirit of Malabo, which was used for a transatlantic row that started from Las Palmas, Canary Islands and ended at New York's Brooklyn Bridge. The rowing vessel will soon call Museum Modern Art Equatorial Guinea home, where she will be on permanent display. Equatorial…

Cooperation to Enhance Maritime Security in West and Central Africa

IMO Secretary-General Kitack Lim has welcomed the Presidential Statement from the United Nations Security Council (S/PRST/2016/4) in which the Council strongly condemns acts of murder, kidnapping, hostage-taking and robbery by pirates in the Gulf of Guinea and encourages States in the region and regional organizations to enhance cooperation on maritime safety and security. The statement also recognizes the efforts of the countries in the region in adopting measures to counter piracy and armed robbery at sea and address transnational organized crime…

The United Nations Security Council on Monday expressed its deep concern over piracy and armed robbery at sea in the Gulf of Guinea, and stressed the importance of a comprehensive approach — led by States of the region, with international support — to address the problem and its root causes. Issuing presidential statement S/PRST/2016/4, the Council strongly condemned acts of murder, kidnapping, hostage-taking and robbery by pirates in the Gulf, and underlined the importance of determining any links between piracy and armed robbery at sea…

China to Start Its First Naval Base in Africa

China is going to build a base in Djibouti, so that will be their first military location in Africa. With the establishment of a base in Djibouti, China joins the global contest for maritime and commercial supremacy, reports Al Jazeera‎. China has long had an economic foothold in Africa, but the base would be an expansion of its military prowess beyond the Asia-Pacific region. The agreement opens the door to the creation of a permanent Chinese military presence on the African…

A national table top exercise on maritime contingency planning was conducted in Djibouti (9-10 November), as part of a series of events leading up to the official opening of the Djibouti Regional Training Centre on Thursday (12 November). The aim of the exercise was to improve procedures and policies when faced with complex maritime security incidents. The table top exercise follows the successful model of table top exercises carried out in west and central Africa and is the first of a planned series in east Africa.

Information Sharing to Fight Piracy and Illegal Fishing in Ghana

International Maritime Organization (IMO)'s Chris Trelawny has visited the Maritime Trade Information Sharing Centre (MTISC-GoG), located in the Regional Maritime University of Accra, Ghana. The multinational centre provides advice and information to merchant shipping operating in the Gulf of Guinea. At the time of the visit over 630 ships were exchanging information with the centre. In recent months the centre has provided support to ships and authorities to assist in countering piracy and illegal fishing, as well as supporting search and rescue operations.

NATO Maritime Commander Vice Admiral Peter Hudson, CBE Royal Navy, visited the two-week Advanced Maritime Law Enforcement/Training of Trainers course taking place at NATO Maritime Interdiction Operational Training Centre (NMIOTC), in Souda Bay, Crete, Greece. The course is being conducted from February 23 to March 6 under the auspices of the Djibouti Code of Conduct (DCoC) and the Djibouti Regional Training Centre with the support and supervision of the IMO Secretariat’s Kiruja Micheni, and benefits from the high NATO standards embraced by NMIOTC.

Representatives from 11 West and Central Africa countries are in Accra, Ghana, to attend the first IMO regional workshop on "MARPOL Annex VI – Ship energy efficiency and technology transfer” from July 2-4. The workshop, which is being hosted by the Ghana Maritime Authority, is aimed at building capacity with regards to knowledge about energy-efficiency measures, while also assessing the regional needs and barriers related to technology transfer. The information gathered during…

More than 60 participants from the 20 coastal Member States[i] of the Port Management Association of West and Central Africa (PMAWCA) joined international experts for a seminar on maritime and port security, held in Cotonou, Benin, from July 22-25, organized by the International Maritime Organization (IMO), in conjunction with PMAWCA. Experts from France, the United States Coast Guard, the United Nations Regional Office for Central Africa (UNOCA), the United Nations Office on Drugs and Crime (UNODC)…

TerraSond Limited announces the return to home base in Alaska of its multi-purpose survey boat 'Luna Sea'. The owners say that this strategic return enhances their capability to serve clients in the Cook Inlet and South Central Alaska. Headquartered in Palmer, Alaska with offices worldwide, TerraSond has a long history of providing high quality geospatial, geophysical, and geoscience survey solutions dedicated to imaging the earth worldwide. The Luna Sea is well suited for performing a wide range of hydrographic and geophysical surveys. 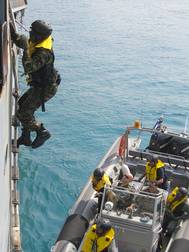 The organisation will help implement the West and Central Africa piracy code adopted at a recent ministerial meeting. IMO has pledged its support to assist in the implementation of a new Code of Conduct concerning the prevention and repression of piracy, armed robbery against ships and illicit maritime activity in west and central Africa, which has been adopted at a Ministerial meeting in Cotonou, Benin. The Code is expected to be opened for signature at the meeting of the Heads of State and Government of Central and West African States, expected to be held in Yaoundé, Cameroon, in May 2013. 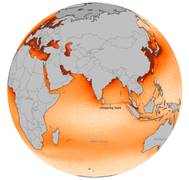 Long tracks of elevated nitrogen dioxide (NO2) levels show up along certain shipping routes when viewed from NASA's Aura satellite. For more than a decade, scientists have observed “ship tracks” in natural-color satellite imagery of the ocean. These bright, linear trails amidst the cloud layers are created by particles and gases from ships. They are a visible manifestation of pollution from ship exhaust, and scientists can now see that ships have a more subtle, almost invisible, signature as well, according to 'NASA Earth Observatory'.

Protocols have been signed for a Mercy Hospital Ship to dock in Congo-Brazzaville’s western port city of Pointe Noire. Meetings with the Republic of the Congo’s Ministries of Health and Ministry of Foreign Affairs in Congo-Brazzaville’s western port city of Pointe Noire this past week culminated in the signing of agreements to confirm that a Mercy Ship will dock in this Central African nation as its next African port of call. An initial protocol was signed in the nation by HE President Denis Sassou Nguesso during a visit by Mercy Ships President/Founder Don Stephens in May 2012.

Malawi in Central Africa is a quiet, peaceful country of immense beauty. However, it is one of the ten poorest nations in the world, with a life expectancy of only 50 years. For much of the thousand miles of shoreline of Lake Malawi, there are no roads and no access to health services. The only means of travel is by dug-out canoe, risking the dangerous currents, storms and crocodiles. Major gifts push the  project forward  : leading marine lawyers Holman Fenwick Willan have donated £60,00 in cash and £40,000 in pro bono work.