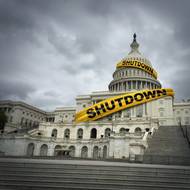 The U.S. government shutdown has delayed Enterprise Products Partners LP's plan to build a major U.S. crude export terminal off Houston, blocking the pipeline operator from filing paperwork with U.S. regulators, an executive said on Wednesday.Enterprise plans to file a 10,000-page permit application with the U.S. Maritime Administration and the U.S. Coast Guard as soon as the U.S. government reopens. It takes about a year for regulators to process an application for a deep-water terminal."Tell me when the government opens and I'll tell you when it happens…

Booming U.S. oil exports have set off a scramble to build Gulf Coast ports to handle more than 3 million barrels per day in new supplies expected over the next five years.Of seven proposed oil-export projects, nowhere is the opportunity greater or the competition more fierce than in Corpus Christi, Texas, where three firms are vying to open the state's first deepwater port.Commodities trader Trafigura has taken an early lead with a planned offshore facility that has an easier…

Port to build oil export terminalPrivate equity firm Carlyle Group will partner with the Port of Corpus Christi, the top oil export hub in the United States, to develop a major crude oil export terminal on Harbor Island.Carlyle's announcement comes as infrastructure in the U.S. oil industry struggles to keep up with record levels of production, driven by the Permian shale patch in West Texas. Both international buyers and American producers are waiting for export capacity to increase.Corpus Christi has its own plan to expand operations to handle larger export tankers.

Riverstone Holdings and The Carlyle Group jointly announce that  they intend to sell HES International to a consortium of Macquarie Infrastructure and Real Assets (MIRA) & Goldman Sachs. Macquarie European Infrastructure Fund 5, which is managed by MIRA, and West Street Infrastructure Partners III (WSIP), which is managed by the Merchant Banking Division of Goldman Sachs, have reached an agreement in principle with Riverstone Holdings and The Carlyle Group to acquire HES International.

Containership owner and operator Seaspan Corporation announced it has acquired Greater China Intermodal Investments LLC (GCI) from affiliates of The Carlyle Group and other minority owners. Seaspan, which previously held 11 percent of GCI and operated the company’s container vessel fleet, will take over GCI’s 16 on the water 10,000-14,000 TEU containerships plus two newbuilds scheduled for delivery during Q2 2018. All 18 vessels sister ships to Seaspan’s current fleet. “With GCI’s fleet now under our ownership…

Ocean Yield ASA announced that the Company has agreed to acquire five modern handysize dry bulk vessels with 10 -year bareboat charters to companies owned and guaranteed by Interlink Maritime Corp. The purchase price is approximately USD 75 million net of pre-paid charter hire. One vessel will be delivered from the shipyard in April 2018, while three of the vessels are built in 2015 and one in 2014. Interlink Maritime will have certain options to acquire the vessels during the charter period…

Global alternative asset manager The Carlyle Group today announced the acquisition of Lauderdale Marine Center (LMC), the nation's largest yacht repair facility in terms of the number of large vessels it can haul and service. Equity for the transaction comes from Carlyle Realty Partners VII, a U.S. real estate investment fund. "In partnership with the outstanding management team and staff at LMC, we will build upon LMC's success through growth and continued innovation and superb customer service," said Thad Paul, Managing Director at The Carlyle Group.

Seaspan Corporation reports the MOL Express, a 4,600 TEU container vessel went aground in Tateyama Harbour, Japan on January 11, 2015. There were no reported crew injuries and all preliminary reports indicate the hull is in a stable condition, and no environmental damage has occurred. Seaspan and MOL, with the assistance of salvage experts, are working on refloating the vessel and restoring it to its original condition. All parties involved are working closely with the appropriate authorities.

Bonds of oil and gas pipeline company Kinder Morgan Inc rallied Monday on expectations that its credit ratings would be boosted to investment-grade following a US$70bn deal to bring all of its publicly traded units into one group. Kinder Morgan's 5% February 2021 bonds jumped to 107 from 101.5 on Friday, while the 5.625% November 2023 bonds rose to 108.5 from 102.5, according to a trader. Another trader said Kinder Morgan Energy Partners long-dated 7.75% March 2032 bonds jumped 15 points to a cash price of 125.5, while its shares soared by almost 20%.

While banks keep lending tight, a massive $5 billion order in China should mark the official turnaround of shipbuilding's fortunes, as private equity in the form of The Carlyle Group and Tiger Group Investments Partner have teamed with Seaspan Corporation, the Washington Family, Gerry Wang and Graham Porter to order more than $5 billion in new ships. Coupled with the recent announcement by Maersk and Daewoo to build a series of 10 of the world's largest containerships, it is fair to assume that the shipbuilding slump is coming to an end.