Gambian authorities seized nearly three tonnes of cocaine from a shipment of industrial salt originating in Ecuador, a spokesman said on Friday, in one of the largest ever busts in West Africa.The 118 bags of cocaine were discovered on Thursday during a search of a container shipped from the port of Guayaquil in Ecuador and through Algeciras in Spain, said Ousman Saidybah, a spokesman for Gambia’s drug enforcement agency.It was not clear where the cocaine was ultimately headed.

The Russian captain and crew of a cargo ship captured last year in Cape Verde with the biggest cocaine haul ever seized in the country were found guilty of drug trafficking and sentenced to jail on Friday.The 9.5 tonnes of cocaine were seized in February 2019 after the ship, which was traveling to Morocco from South America, docked at the port of Praia for legal reasons following the death of a crew member.An Atlantic archipelago of 500,000 people off Africa’s west coast, Cape…

The French-flag cruise line Ponant is testing the Solid Sail concept on its vessel Le Ponant. Tests are being conducted with maritime construction company Chantiers de l’Atlantique as part of the sailing cruise-vessel project Silenseas, launched two years ago.Two patents have been filed—in 2009 and 2017—for the new type of sail, made of fibreglass, carbon and epoxy-resin panels in a carbon-slat frame. This new technology will significantly reduce energy consumption tied to propulsion…

The Lince Class service from Transinsular, a GRUPO ETE company, will start to call Total Terminal International Algeciras (TTI) from August 23, 2018, opening a direct link from the Spanish mainland to Cape Verde (Praia and Mindelo), that will also serve as a cargo transshipment hub for the Mediterranean, namely other ports in Spain, as well as Italy, Greece and Turkey.The strengthening of the Lince Class with a new call in the European continent (it already links Leixões and Lisbon to Cape Verde)…

Transinsular announced the 'Lince Class', the fastest maritime connection with Cape Verde from Portugal (Leixões / Lisbon) and the Canary Islands (Las Palmas). And therefore, the most competitive solution for exporting products from Portugal, Spain, Northern Europe and the Mediterranean. At the same time, and as a complement to the 'Lince Class', the ETE Group will offer inter-island ‘ATOBÁ’ cabotage services, on the way from Praia, Mindelo, Sal and Boavista, connecting these ports to the African proximity markets such as Guinea-Bissau and Mauritania.

The business portfolio internationalization and the development of river operations are two of ETE Group’s strategic focus, as referred last Friday on the 80th birthday ceremonies at Naval Rocha shipyard (in Lisbon) with the presence of the President of Portugal, Marcelo Rebelo de Sousa, the Minister for the Sea Affairs, Ana Paula Vitorino and the Minister for Environment, Matos Fernandes. According to Luis Nagy, the CEO, “at ETE Group we are  starting the ninth decade with a strong focus on the internationalization of our operations…

With the birthday of the cruise ship AIDAcara on June 7, 2015, AIDA Cruises is heralding the 20th year of its company history. On Sunday evening, more than 20,000 guests will toast together aboard the 10 AIDA ships, opening the anniversary celebrations. “AIDA – an inspiring smile. The original turns 20” is the slogan of the anniversary campaign, which will provide inspiration until the end of 2016 with exciting insights into the history of the modern cruise along with a variety of promotions and events.

The Royal Australian Navy operated Sail Training Ship Young Endeavour set sail from Sydney today for a 12-month voyage, circumnavigating the globe. Parliamentary Secretary to the Minister for Defence, Darren Chester, attended the departure from Fleet Base East, and spoke with members of the Royal Australian Navy crew and the 24 young Australians who will sail the ship on the first leg, to Rio de Janeiro, Brazil. "The navy crew and young Australians who set sail from Sydney today represent every Australian state and territory.

The International Transport Intermediaries Club (ITIC) has issued the following general advice related to the outbreak of Ebola. Vessels that have recently called in an affected country should contact their local agents prior to arrival at the next ports of call for the latest country specific advice regarding measures taken to avoid the spread of Ebola. ARGENTINA: Pilot companies rendering pilotage services in the River Plate have decided that their pilots will not board any vessel coming from the infected areas (Guinea…

ISS Awarded for "Excellence in Service"

Maritime service provider Inchcape Shipping Services (ISS) said it was honored to join The World, Residences at Sea, in Miramar, Florida on Sunday, March 9, 2014 at the company’s seventh annual Celebration of Excellence awards dinner held to recognize its top port agents and travel partners from across the globe. From the home of President and CEO Tom McAlpin, honorees enjoyed a Caribbean-themed, family-style barbecue amid a gorgeous South Florida sunset, the perfect backdrop for the outdoor event. 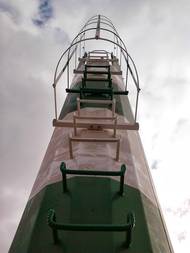 Lindley Supplies Pontoons and Aids to Navigation in Cape Verde

Lindley Marinas, specialized in floating equipment, has recently supplied pontoons and aids to navigation to ENAPOR, the Cape Verde port management company. The pontoons were part of the infrastructure created in Porto Novo (Santo Antão Island) for the berthing of tenders servicing the cruise ships that visit the archipelago. The aids to navigation were supplied to the contractors carrying out the second phase of the works in Porto da Praia (Santiago Island). The Lindley Group…

Counter-piracy: Sea Marshalls to Set Up Cape Verde Base

To thwart escalating piracy in the Gulf of Guinea, Sea Marshalls gets license to use Cape Verde as base for ship security operations. The Government of Cape Verde earlier granted a licence to Cape Verde Maritime Security Services (CVMSS) allowing it exclusive rights to vet Private Maritime Security Companies (PMSCs) who want to use the island as a base for embarking and disembarking armed security teams. Sea Marshalls is the first company to obtain its approval. On behalf of the Cape Verde Government…

In a move designed to thwart the escalating piracy in the Gulf of Guinea, the Government of Cape Verde has granted a licence to Cape Verde Maritime Security Services (CVMSS) allowing the company exclusive rights to vet Private Maritime Security Companies (PMSCs) who want to use the island as a base for embarking and disembarking armed security teams. And UK-headquartered SeaMarshals Ltd is the first company to be granted a permit to use Cape Verde as its base for security operations in the West Africa region.

Liberia's President, set for an afternoon cruise, delayed first by boat's late arrival, then gave up idea when gangway jammed on board. An embarrassing fiasco occurred at the Free Port of Monrovia recently, causing the President of Liberia to depart disappointingly, after waiting for nearly three hours at the pier (the dock) reports the nation's 'Daily Observer'. The ship, MV Diallo Macedo, was scheduled to have departed that afternoon for a cruise down the Atlantic [coast] with several guests aboard, who were to have been entertained with dinner and dancing, for a handsome fee.

The Navy will soon get a leg by using 'Rough Rhino', an electronic system for locating illegal fisherman, drug smugglers, pirates, human traffickers and others at sea who don’t want to be found and thus switch off their Automatic Identification System (AIS). Today’s technology only allows ships to track other vessels not transmitting AIS if they are within the horizon, or about 25 to 35 miles, according to Dr. Michael Pollock, director for the electronics, sensors and networks division at ONR.