A liquefied natural gas (LNG) tanker which loaded a cargo from the United States is currently heading to China, the first shipment since March 2019, according to shiptracking data from Refinitiv Eikon and Kpler on Monday.The tanker SK Resolute loaded the cargo from the Cameron LNG terminal on March 22 and was originally headed to Cristobal, Panama, according to shiptracking data from Refinitiv Eikon and data intelligence firm Kpler.It changed its destination to Tianjin in China on March 28 and is expected to arrive at the Chinese port on April 28…

Together with the introduction of new expedition cruise catalogues for the 2020-2021 season. Hapag-Lloyd Cruises has also announced that low-pollutant marine gas oil (MGO) will be used exclusively on all routes sailed by its expedition ships in the fleet - the HANSEATIC nature, the HANSEATIC inspiration and the BREMEN from July 2020. Joining the fleet in 2021, the HANSEATIC spirit will also use this fuel.The use of low-sulphur fuels in the Antarctic has been mandatory for several years and already Hapag-Lloyd Cruises uses marine gas oil voluntarily in other sensitive regions…

Three cargoes of U.S. crude are heading to China from the U.S. Gulf Coast, trade sources said on Monday, the first departures since late September and a 90-day pause in the two countries' trade war that began last month.The vessels left Galveston, Texas, last month and are scheduled to arrive at Chinese ports between late January and early March, according to shipbrokers and vessel tracking data. The shipments mark a change since Chinese buyers largely began avoiding U.S. oil during the trade dispute that flared last summer."It looks like China has resumed purchasing U.S.

The construction activities on the site of the new sea lock in IJmuiden are in full swing, said Port of Amsterdam.More than 200,000 m3 of concrete have now been poured and still more will be poured in January and February, including concrete for the inner lock head (number 1 in the picture) and for the lock chamber (number 3 in the picture).Also in January and February, work will continue on the completion of the lock gates and on the local control buildings - which are now taking shape (numbers 4 in the picture).After a 44-day voyage from South Korea via Cape of Good Hope…

Brazilian farmers in top soy state Mato Grosso signed a memorandum of understanding with the Panama Canal Authority to evaluate ways to cut transportation costs and boost Brazilian grain volumes using the waterway, the authority's chief administrator said. The canal's administration is looking to increase its participation in rising Brazilian grain exports, since a large part of grain trade expansion in Brazil is via new terminals in the northern part of the country, which are closer to the canal.

The Panama Canal today welcomed the largest capacity vessel to ever transit the Expanded Locks, the Neopanamax containership CMA CGM Theodore Roosevelt, which began its voyage from Asia, will be making stops along the U.S. East Coast. The ship has a total TEU allowance (TTA) of 14,855 and measures 365.9 meters in length and 48.2 meters in beam. “Today’s transit not only represents the growing success and adoption of the Expanded Canal, but also its impact on reshaping world trade,” said Panama Canal Administrator Jorge L. Quijano.

Just down river from Damen Song Cam Shipyard, SAL Heavy Lift’s MV Svenja departed from Halong Bay loaded with 14 vessels. The shipment consists primarily of built-for-stock vessels – Stan Pontoons and Tugs – which will be available for immediate purchase on arrival in Rotterdam in October. MV Svenja’s voyage began in Shanghai on August 30th when she started loading eight Stan Pontoons that were built at Damen Yichang Shipyard, China. This first load includes Stan Pontoons 4113, 4111, 4512, 5211 and 6316.

Physical supplier and trader of marine fuel oil the Bomin Group is launching a physical operation in Port Louis, Mauritius, effective from July 12, 2016. Bomin (Mauritius) Ltd. will utilize the 2008-build, double-hulled bunker barge MT Hakkasan to provide customers with products, including IFO 180cst, as well as MGO. All deliveries will be provided under a Bomin specific Bunker Delivery Note (BDN). “Port Louis is the only official port of entry and exit for sea vessels in Mauritius…

It was another lacklustre month for the shipping industry as freight rates in almost all sectors softened further. Drewry’s Earnings Index declined by 0.5% during the month to 52.4. The new locks of the Panama Canal finally became operational in June, enabling vessels of up to 49-metre beam, 366-metre LOA and 15-metre draught to pass through, which in turn will affect trade patterns in various sectors. The canal can now accommodate containerships of up to 12,500 teu. As more ULCVs are being delivered each month…

The very large crude carriers (VLCC's) will load at Ras Tanura terminal for deliveries to a US Gulf Coast port next month. The very large crude carriers will each load 280,000 metric tons of oil at Saudi's Ras Tanura terminal between April 3 and April 9 for the voyage via the Cape of Good Hope to the Port Arthur, Texas terminal, reports Bloomberg from various sources. Saudi Aramco, as Saudi Arabian Oil Co. is known, and Royal Dutch Shell Plc (RDSA) operate refineries through Motiva Enterprises LLC.

Fairmount Marine’s powerful tug Fairmount Glacier has successfully assisted the new build semi submergible drilling rig Scarbeo 9 sailing around Cape of Good Hope. For this operation Fairmount was contracted by Saipem Energies directly after the successful installation of the floating, production, storage and offloading unit Usan offshore Nigeria. Fairmount Glacier was contracted to sail towards a rendez-vous location offshore South Africa where she met with Scarabeo 9 and escorted her safely around the Cape of Good Hope.

The 10-kg cube-shaped satellite, jointly developed by Tokyo-based AXELSPACE Corp.and Weathernews, is scheduled to be launched from the Yasny Cosmodrome in Russia on Sept. 28. It will be the first attempt by a private company to use a satellite to monitor ice in the Arctic Ocean, reports the Japan Times. Weathernews plans to use the data to provide navigational information to commercial vessels plying the Arctic Ocean during the summer. The service will become available starting in summer 2013.

Aircraft Carrier Hull to be Carried on Dockwise HTV

Australian Landing Helicopter Dock (ALHD) ship hull is for onboard Heavy Transport Vessel (HTV) delivery to Australia from Spain. Blue Marlin, the largest semi-submersible HTV available to date, is to load shortly the Navantia manufactured hull (230 meters in length) of the amphibious ALHD flagship Canberra for delivery to the Royal Australian Navy. A complex technical challenge emerged: the aircraft carrier hull was calculated to protrude 55 meters from the aft end of the Blue Marlin.

In response to requests from clients and the shipping public for quicker transit times to the Red Sea, Gulf and the Middle East markets, MSC Mediterranean Shipping Company announced a rotation change on its GGS USAEC / Far East service, which had previously sailed via the Cape of Good Hope, but will now sail through the Suez Canal and call at Jeddah, Saudi Arabia, thereby substantially reducing transit times. This will be a non-stop direct service from the United States to Jeddah.

The Vendée Globe 2012-2013, is a round-the-world single-handed yacht race, sailed non-stop and without assistance, a serious test of endurance. The race started last Saturday and finishes in Les Sables-d'Olonne , in the Vendée département of France ; both Les Sables d’Olonne and the Vendée Conseil Général are official race sponsors. The course is essentially a circumnavigation along the clipper route : from Les Sables d’Olonne, down the Atlantic Ocean to the Cape of Good Hope ; then clockwise around Antarctica , keeping Cape Leeuwin and Cape Horn to port; then back to Les Sables d’Olonne.

BHM Penlaw and Tactique Ltd have now joined forces to support their clients in exploiting an alternative sea route which reduces sailing distance by 4,300 nm and 10 days on transits between Europe and Asia. The Northern Sea Route, also known as the NSR, or Northeast Passage, is a burgeoning waterway between Europe and Asia cutting through roughly 3,500 nm of frigid waters off Russia’s northern coast. As sea-ice recedes and Arctic technology improves, traffic along the NSR will increase, making this region one of chief economic and strategic importance. 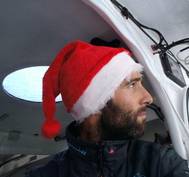 Vendee Globe leaders Armel Le Cléac’h and his long time running partner François Gabart passed into the Pacific Ocean 9 days ago. As was widely predicted, the twosome have finally been slowed through today. It has been the two skippers which are chasing hard behind, Jean-Pierre Dick and Alex Thomson, who have finally been granted the chance to shine. Dick and Thomson are riding up on a fast moving low pressure system which will ultimately reach and rescue the two leaders from…