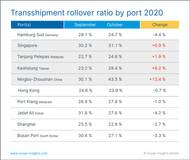 Severe congestion at Chinese ports is easing, say officials and industry participants, although a logjam of refrigerated containers has disrupted supplies of fresh and frozen food and pushed up freight rates outside China.Thousands of refrigerated containers carrying meat, seafood and fruit from around the world to China have been stuck for weeks at the country's ports after Beijing extended its Lunar New Year holiday and cities around the nation restricted free movement to curb…

South Korean port company Busan Port Authority (BPA) said that it signed a contract with Samsung SDS to operate a logistics center in Rotterdam.BPA will begin a construction of the logistics center in September this year and complete and operate it in around June 2021.Samsung SDS, a subsidiary of Samsung group has been providing information technology services,  will provide comprehensive logistics services for small and medium-sized companies conducting business between Europe…

Hyundai Merchant Marine (HMM) announced that its cargo processing at Busan Port for January to July 2018, has hit a new record.Processed cargo during the first seven months of this year reached 1,157,980 TEU, an increase of 14.3 percent year-over-year.For the volume of exports and imports has recorded 608,872 TEU, a soaring 14.1 percent year-over-year.Also, the transit cargo volume increased from 473,341 TEU to 541,926 TEU, up 14.5% year-over-year.HMM attributed the performance to its service & volume reliability…

India signed an MoU with the Republic of Korea (South Korea) on Mutual Recognition of Certificates of Competency of Seafarers. This paves the way for the two governments to mutually recognize  the certificates of  maritime education and training, competency, endorsements and medical fitness of seafarers issued by each other. The agreement was signed by Nitin Gadkari, Ministry of Shipping, Road Transport & Highways and Water Resources, River Development & Ganga Rejuvenation and his Korean counterpart Kim Young-choon at a ceremony in Busan.

Nitin Gadkari, India's Union Minister of Shipping will be on an official visit to the Republic of Korea (South Korea) from today (9 April 2018). During the 4 day visit, Shri Gadkari will focus on taking forward the bilateral cooperation between India andKorea in shipping, ports, inland waterways, highways, river interlinking and infrastructure sectors. An Undertaking on Mutual Recognition of Certificate of Competency of sea-farers will be signed during the visit. Known for maritime technology prowess…

The upcoming reorganization of global shipping alliances is likely to hit Korea’s largest port in Busan and  the harbor volume of Busan Port is expected to drop by 3.5 percent from next year, the Korea Herald reported quoting Korea Maritime Institute (KMI)’s report. KMI  announced on December 22 that as a result of the analysis of the port rotation adjustment plans formulated by the soon-to-be-established shipping alliances "Ocean" and "THE Alliance," the number of shipping services using the port of Busan is likely to decline by three compared to the current figures.

Busan: Business May Not be As Usual, Post Hanjin

Though Busan Port, the largest customer of Hanjin Shipping and hit hardest by the Liner's collapse,  asserts that everything is under control, doubts are being raised on Hanjin rehab plan as ships clog at the South Korean port, reports Reuters. As 13 Hanjin ships crowded waters outside the country's biggest port, the South Korean court handling Hanjin's receivership cast doubt on the container carrier's ability to survive a restructuring. A rehabilitation plan for the world's…

The Maritime and Port Authority of Singapore (MPA) hosted Mr Kitack Lim, Secretary-General of the International Maritime Organization (IMO) from 29 August to 1 September 2016. This is Mr Kitack Lim’s first visit to Singapore since assuming the position of IMO Secretary-General on 1 January 2016. Mr Lim’s visit during his first year of office underscores the strong ties between the IMO and Singapore, as well as the contributions that Singapore makes to the international maritime community.

Lim Ki-tack Will Take Office As IMO Chief Next Month

Lim Ki-Tack, who has been elected as the next secretary-general of the International Maritime Organization (IMO) in a ballot, will start his four-year term in the beginning of next year, the South Korean government said, reports Yonhap. Lim will replace Secretary-General Koji Sekimizu to become the 9th IMO secretary-general starting Jan. 1. With six candidates in the running  it took five rounds of voting before Lim was able to collect more than half the 40 votes from IMO Council members.

Hanjin-Hyundai: No Merger or Only Restructuring?

South Korea’s government is discussing whether to merge or sell  Hanjin Shipping and Hyundai Merchant Marine in an attempt at state-led industrial restructuring. But the two lines in question belong to different container alliances, are fierce rivals and have both denied that Seoul is trying to coerce them to merge. “There is a need to maintain the existence of the two companies when considering the impact a merger could have on South Korea’s import- and export-oriented economy and global shipping alliances…

The Busan Port Authority (BPA) announced Woo Ye-jong has been named as its new CEO, as appointed by the Korean Ministry of Oceans and Fisheries. Woo took office on July 31, 2015 and will serve for a three year term. He succeeds Lim Ki-tack who will take over as Secretary General at the International Maritime Organization (IMO) in January 2016. On taking his new role, Woo said, “My focus as CEO will be on strengthening the port’s competiveness by improving efficiency and keeping control of costs.

A new liquefied natural gas (LNG)-bunkering terminal may become operational at South Korea's Busan New Port by 2020. South Korean shipping company Polaris Shipping will reportedly invest $500 million (KRW 600 billion) to construct the facility. According to IHS, the terminal will occupy a 185,700 m² site in Busan New Port and is to have four berths and two LNG tanks. Busan Port Authority and Busan Regional Oceans & Fisheries Administration had received a business proposal from Polaris Shipping and sought approval from the Ministry of Oceans and Fisheries.

Port of Busan aims to handle 13 million TEU of trans-shipment cargo by 2020 ranking it number two in the world. A long-term vision and strategy to develop the Port of Busan into a global transshipment hub port has been announced by the Korean Ministry of Ocean and Fisheries together with the Busan Port Authority (BPA). In recent years, transshipment cargo at Busan has grown by an average of 10 percent year-on-year while local cargo has increased by 4.2 percent. In 2014, trans… 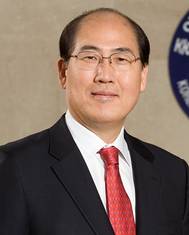 Ki-tack Lim from the Republic of Korea has been elected as the new Secretary General of the International Maritime Organization (IMO), with effect from January 1, 2016, for an initial term of four years, the IMO announced. The current president of Busan Port Authority, Lim has served as the Republic of Korea’s Deputy Permanent Representative to IMO from 2006 to 2009 and was Chairman of the Sub-Committee on Flag State Implementation (FSI) from 2002 to 2004. Lim majored in nautical science at the Korea Maritime and Ocean University (KMOU), Busan, graduating in 1977.

Yesterday in Malmö, Sweden, the Korean Shipowners’ Association (KSA) made a donation of $50,000 to the World Maritime University. The donation was handed over by KSA chairman, Youn-jae Lee, at a ceremony attended by Cleopatra Doumibia-Henry (president designate of WMU) and Neil Bellefontaine (current president). WMU moved into Malmö city earlier this month and KSA’s donation will be used to furbish the university’s cafeteria which has now been named KSA Hall. KSA said it maintains strong relationships with WMU as more than 80 Korean shipping professionals have graduated from the university.

The Maritime and Port Authority of Singapore (MPA)  and the Port of Rotterdam Authority have signed a Memorandum of Understanding (MOU) to exchange information on marine services and jointly collaborate on research and development in the areas of service efficiency and optimisation, and new developments in the maritime and port sectors. Under the MoU the two parties will exchange information on marine services, including standards, and regulatory frameworks for bunkering and other marine services, as well as the application of information technology in providing those services.