2019 was a relatively safe year for shipping in the port of Rotterdam. Over the past year, the number of sea-going vessels arriving was about the same as in 2018: 29,491 compared to 29,476 last year.According to the port authority, the number of accidents also remained virtually the same: 113 compared to 112, which involved mainly ‘parking damage’. As there was one very serious accident, the NSI (Nautical Safety Index) – a reflection of nautical safety – was slightly below the norm (6.56 instead of 7).

Copenhagen Malmö Port (CMP) now offers bunkering of Liquefied Natural Gas (LNG). First off was the vessel Ireland, which unloaded cement in Malmö. In connection with this she was provided with LNG via tanker lorries. It's about bunkering where safety requirements are extra tough. The bunkering at the end of May was made possible through close cooperation between the LNG supplier SkanGas, the client company Cementa, and CMP. Together the companies have investigated risks, taken precautionary measures and developed routines for bunkering LNG at CMP.

Skangas to Source LNG at Import Terminal on Isle of Grain

Skangas has announced that it has signed a Letter of Intent (LoI) with National Grid Grain LNG. Under the terms of the LoI, Skangas is to source LNG at the Grain LNG import terminal on the Isle of Grain in the UK. Skangas, which produces LNG, struck the deal with Grain LNG to ensure a reliable supply of LNG is available, which is critical to the fast-growing small-scale LNG market. As a result of this recent development, Skangas becomes the first small-scale LNG supplier to enter into such an agreement with a UK-based import terminal. 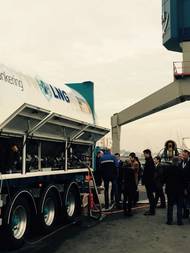 New Incentive for Ships that Bunker LNG in Rotterdam

Rotterdam is introducing an additional incentive to bunker LNG, liquefied natural gas. The Port of Rotterdam Authority has reserved a total of EUR 1.5 million for this incentive. The scheme will apply until 2020. Up until this time, seagoing vessels that bunker LNG in Rotterdam can benefit from a 10% discount on gross seaport dues thanks to the new scheme. Allard Castelein – CEO of the Port of Rotterdam Authority – announced this on 15 December 2015 during the second day of the ‘LNG Masterplan final event’. LNG is the cleanest fossil fuel.

Ships running on liquefied natural gas (LNG) are going to be able to bunker at the Port of Gothenburg, as new regulations for LNG bunkering have been introduced by the Gothenburg Port Authority in collaboration with the Port of Rotterdam and the Swedish Transport Agency. The regulations will allow cargo ships to bunker LNG at a cargo terminal and are the first general regulations to be introduced in Sweden. Dan-Erik Andersson, Vice President Operations at the Port of Gothenburg Energy Port, said: "We firmly believe that LNG is the marine fuel of the future.

Ports of Stockholm claims first in the world to provide infrastructure for liquefied natural gas (LNG) fuel for large passenger ferries. A successful collaboration involving AGA, Viking Line, Ports of Stockholm and the appropriate government agencies has made an infrastructure for bunkering possible. "Our new passenger ferry, M/S Viking Grace, represents an environmental milestone, and the ability to provide LNG bunkering opportunities is a very important piece of the jigsaw in our environmental work.

LNG bunkering logistics dampen owner’s LNG power enthusiasm. When sail gave way to steam, the British Royal Navy dominated global maritime trade routes. It had the power and outreach to build a global chain of coaling stations for its warships. The availability of steam coal at strategic points gave commercial shipowners the confidence to order coal-powered steamships and the transition from sail to steam was very quick. Unfortunately for backers of LNG power for ships, there is no Navy today with the sort of scope and reach enjoyed by the British in their heyday.