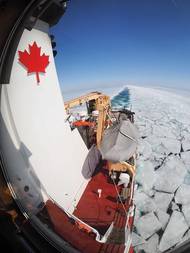 United States grain exports via the St. Lawrence Seaway are up 32.1 percent this season compared to 2017. Construction materials were also heavily influential in the latest results with a nearly 38 percent increase in asphalt from the same time last year, as well as increases in cement and stone.“Summer is the season for construction projects and ships have been delivering materials for major building projects across the region,” says Bruce Burrows, President of the Chamber of Marine Commerce. “U.S. 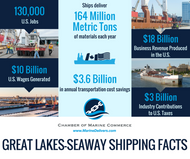 As marine shipping continues to support the growth of the Canadian and U.S. economies, St. Lawrence Seaway cargo shipments to-date for 2917 are 14 percent ahead of 2016 volumes. Total cargo tonnage from March 20 to September 30 reached 24.3 million metric tons – 3 million metric tons more compared to the same period in 2016, according to The St. Lawrence Seaway Management Corporation. “Our results point to the strength of the Canadian and U.S. economies. Export shipments of mined products such as iron ore and dry bulk via the Seaway have grown dramatically this year…