Octopi, part of Navis and Cargotec Corporation, has announced a new Octopi subscription agreement with the Port of Belize Ltd. The Port of Belize chose to partner with Octopi as part of a larger effort to modernize its operations, bring the terminal up to international standards of operational excellence and offer best-in-class services to its customers.Located in Belize City, the country’s commercial gateway, the Port of Belize currently operates at 45,000 TEU annually. The Port…

The Port of New Orleans (Port NOLA) has welcomed the largest cruise ship in both length and passenger occupancy to ever sail from the Crescent City when the Norwegian Breakaway homeported at the Julia Street Cruise Terminal for its inaugural cruise Nov. 11, 2018. The ship placement contributes to Port NOLA’s cruise business momentum and contributes to tourism’s economic impact across the New Orleans-region.The 1,068-foot vessel will sail from New Orleans through April 12, 2019…

International Registries, Inc. and its affiliates (IRI) announced that the Republic of the Marshall Islands (RMI) Registry will not levy surcharges and commissions on vessel documents and certificates issued on its behalf by the classification societies."The RMI Registry will continue to provide its clients with a transparent pricing structure for the issuance of key certificates needed by shipowners," it said in a statement.Bill Gallagher, President of IRI, which provides administrative and technical support to the RMI Registry…

The concentrated inspection campaign (CIC) on safety of navigation was carried out in the Tokyo MoU region from 1 September 2017 to 30 November 2017. Within the campaign, Tokyo MOU member Authorities verified vital points of compliance in accordance with SOLAS Ch. V on all types of foreign merchant ships. During the CIC, member Authorities inspected a total of 6,720 vessels, of which 36 (0.54%) were detained as a direct result of the campaign. In total 157 (2.34%) ships were detained during the campaign.

Atlantic Hurricane Season to be Stronger than Expected

In its updated 2016 Atlantic Hurricane Season Outlook, NOAA calls for a higher likelihood of a near-normal or above-normal season, and decreases the chance of a below-normal season to only 15 percent, from the initial outlook issued in May. The season is still expected to be the most active since 2012. Forecasters now expect a 70-percent chance of 12–17 named storms, of which 5–8 are expected to become hurricanes, including 2–4 major hurricanes. The initial outlook called for 10–16 named storms, 4–8 hurricanes, and 1–4 major hurricanes.

Inspectors Get Tough on ECDIS

ECDIS ACAT (Annual Competency Assurance Training): the Inspectors training in ECDIS has without doubt increased safety at sea as it highlights that not all is well, regardless of certificates held. Few are aware that the world is halfway through an international project to train around 1,000 inspectors and PSC officers in ECDIS. Without doubt, it has already dramatically increased the safety of navigation at sea by providing inspecting officers with all the relevant questions that need to be asked for all the 38 manufacturers, regardless of what certificates the officers hold.

The WTO received the 50th ratification of the Trade Facilitation Agreement (TFA) after the former Yugoslav Republic of Macedonia deposited its instrument of acceptance on 19 October. Concluded at the WTO’s 2013 Bali Ministerial Conference, the TFA contains provisions for expediting the movement, release and clearance of goods, including goods in transit. It also sets out measures for effective cooperation between customs and other appropriate authorities on trade facilitation and customs compliance issues.

At its 48th meeting last month, the Paris MoU Committee approved the 2014 inspection results and adopted new performance lists for flags and Recognized Organizations. These lists will take effect from July 1, 2015. The “White, Grey and Black (WGB) List” presents the full spectrum, from quality flags to flags with a poor performance that are considered high or very high risk. It is based on the total number of inspections and detentions over a three-year rolling period for flags with at least 30 inspections in the period.

Two people drowned and four were missing at sea and feared dead after two merchant ships collided in rough seas off the Italian coast on Sunday, Italian officials said. A Turkish ship with 11 crew members sank after the collision with a vessel carrying a Belize flag in poor visibility a mile from the Italian Adriatic port of Ravenna, a coastguard official said. The mayor of Ravenna Fabrizio Matteucci said on Italian state television that the dead and missing were all Turkish men from the ship Gokbel which sank after the collision with the Belize-flagged Lady Aziza at around 0800 GMT.

Officials with Norwegian Cruise Line and the Board of Commissioners of the Port of New Orleans signed a new four-year berthing agreement today with three one-year options. The agreement will keep at least one Norwegian cruise ship sailing seasonally from New Orleans through 2018 with the ability to extend the agreement through 2021. “Our partners at Norwegian Cruise Line are a pleasure to work with and we are elated to sign a long-term agreement to retain the Norwegian brand in the Crescent City,” said Port President and CEO Gary LaGrange.

The Athens Convention relating to the Carriage of Passengers and their Luggage by Sea, 2002, which substantially raises the limits of liability for the death of, or personal injury to, a passenger on a ship, enters into force today, April 23, 2014. The higher limits of liability will apply to ships registered in the following States which have ratified the 2002 treaty: Albania, Belgium, Belize, Bulgaria, Croatia, Denmark, Greece, Latvia, Malta, the Netherlands, Norway, Palau, Panama, Saint Kitts and Nevis, Serbia, Syrian Arab Republic and the United Kingdom.

Having served as the editor of Maritime Reporter & Engineering News for more than 20 years, it is my running joke that Jim Rhodes, president, Rhodes Communications, Inc., is the first person I see at every trade show I attend, anywhere I attend, around the world. This, I think, is testament not to dumb luck, rather to Rhodes, who this month celebrates the 30th Anniversary of his self-named PR firm, as an astute and always-present PR machine. Rhodes Communications, Inc., an international public relations and marketing services company based in Norfolk…

Inchcape Shipping Services (ISS), a maritime services provider, has announced the appointment of Sigmund Rismyhr as General Manager for Central America. Sigmund began his career in the shipping industry on liner vessels, starting with Barber Lines, in 1972. Since then he has gained extensive shipping and logistics experience working in managerial roles around the world, particularly in Asia, the US and South America. His roles have included Managing Director for a leading global logistics company and most recently as Executive Vice President for a major agency in Panama… 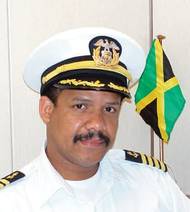 Jamaica is backing a pledge by the Secretary General of the International Maritime Organization (IMO) to half the number of lives lost at sea by 2015. Mr. Koji Sekimizu has made reducing maritime casualties a key aim of his term of office. IMO figures put the number of lives lost at sea in 2012 at approximately 1,000, including 500 in international shipping. Rear Admiral Peter Brady, Director General of the Maritime Authority of Jamaica, said, “We fully endorse the Secretary General’s aims and will do all we can to assist him to achieve his target.

Subsea 7 takes Nexans DEH system deeper than ever before for Chevron’s Lianzi project off SW Africa. The Lianzi development (located in a unitized offshore zone between the Republic of Congo and the Republic of Angola) will include the world’s deepest installation of a Direct Electrical Heating (DEH) system of subsea production pipelines. Nexans say that their field-proven DEH solution provides eco-friendly and cost-effective flow assurance for subsea production pipelines. The contract with Subsea 7 is valued at approximately 25 million Euro…

Belize's Supreme Court declared offshore drilling contracts issued by the Government of Belize (in 2004 and 2007) null and void. The ruling, handed down by Justice Oswell Legall , was in response to a case brought by Oceana, COLA, and the Belize Coalition to Save Our Natural Heritage. It effectively ends the Belizean government's immediate effort to allow offshore oil drilling in the Meso American Reef, the second largest barrier reef in the world. The court overturned the contracts after determining that the government failed to assess the environmental impact on Belize's ocean…