A large passenger vessel has become the industry’s first to achieve system compliance under classification society DNV GL’s framework for integrated cybersecurity.Today's vessels are increasingly fitted with integrated automation systems and digital solutions. And as vessels’ systems gorw more connected than ever before, new security threats areise, driving the need for closer and earlier collaboration on cybersecurity between all key stakeholders in the newbuilding process.ABB…

Kalmar, the provider of cargo-handling solutions and services to ports and terminals, has concluded a comprehensive software maintenance and support agreement with Australian terminal operator Patrick Terminals.The agreement, which covers the equipment automation systems at the company’s Brisbane and Sydney AutoStrad terminals, was booked in Cargotec's 2019 Q4 order intake, with the agreement coming into effect from November 2019, said the Cargotec unit.Patrick Terminals is Australia's leading container terminal operator, handling over three million TEU annually.

Høglund Marine Solutions and DNV GL have signed a Memorandum of Understanding (MoU) to help generate and export big data from ships.This is a step towards greater digitalization of the marine industry, providing Høglund with the opportunity to further develop their automation expertise and systems and DNV GL the potential to enhance their classification services.“The digital transformation of shipping is finally happening and opens the door to many long sought-after advantages and necessary progress”, says Børge Nova, CEO of Høglund Marine Solutions.

When talk turns to the digital revolution sweeping through the maritime industry, one need look no further than Wärtsilä, which has evolved from a shipbuilding company to an engine manufacturer, and is now embarked on a historic digital transformation led by Marco Ryan, Chief Digital Officer & EVP. We met with Ryan recently in Hamburg, Germany, to discuss the path and pace forward.To start, please lay out the scope of your responsibilities.At a high-level my job is to architect and deliver the transformation (of Wärtsilä) to a smart technology company.

The overhaul of the ferry vessel “Balaken”, belonging to the Transport Feet of Azerbaijan Caspian Shipping Company, is completed. The ship successfully passed the sea trials. Major repairs of steering and auxiliary equipment, engine mechanisms, various pumps, main and auxiliary engines of the vessel were completed. Some parts are replaced with new ones. The cleaning and painting of the underwater and surface of the ferry was done. All necessary works on adjustment, repair and checking of automation systems, navigation equipment and electrical parts of the vessel were also finished.

While much of the maritime world slumps, the cruise sector is enjoying its most vibrant growth in a generation. Carnival Corporation, in particular, is doing very well as its financial performance is stronger than ever, with 2016 delivering the best year of earnings in company history. The company’s adjusted earnings for 2016 of $2.6 billion is the best annual financial performance in its 44-year history. With that, Hans Hederstrom, Managing Director give overview of CSMART, one of the newest and richly appointed simulation centers on the planet.

Alphatron Marine said it has acquired a new office and warehouse space in Zwijndrecht, Belgium to serve customers in Belgium and France. The new location – operational since September and officially opened on November 9, 2016 – replaces the company’s existing Meerdonk office. Alphatron Marine Belgium is part of a group of companies governed by Alphatron Marine. Together, they act as importer, producer, developer and service provider of navigation, communication and automation systems. Besides this, the company provides specialized IT solutions.

Carnival Corporation & plc today announced the official opening of its Arison Maritime Center, a world-class facility dedicated to providing safety training for its bridge and engineering officers responsible for the navigation and operation of the company’s fleet of cruise ships. Located in Almere, Netherlands just outside Amsterdam, the new 75-million-euro facility features some of industry’s most advanced simulators and training equipment to provide annual training to more than 6,500 bridge and engineering officers from Carnival’s 10 global cruise line brands.

The Tsakos Group of Companies has selected DNV GL to assist in preparing a cybersecurity management system for its fleet and onshore facilities – the first such management system developed by a shipping company in cooperation with DNV GL’s Advisory Services. The Greek shipping organization will implement a comprehensive system of safeguards and procedures to protect their assets from cyber risks. DNV GL is the first classification society to put this kind of cybersecurity service into practice.

Robert Wassmer will join Kelvion, a globally active manufacturer of industrial heat exchangers, as Chief Executive Officer (CEO) and Managing Director of Kelvion Holding GmbH effective as of July 1, 2016, the company’s shareholder committee announced. Wassmer is an experienced CEO with national and international experience. He has previously served as chairman of the executive board at Knorr-Bremse Schienenfahrzeuge GmbH, the European Rail Equipment Subgroup of Knorr-Bremse. Before that…

Two new cruise vessels being built for USA based Seabourn Cruise Line will feature a broad assortment of Wärtsilä propulsion, electrical and automation solutions. The ships are to be built at the Fincantieri yard in Italy. The 'Seabourn Encore' is already under construction and the 'Seabourn Ovation' is scheduled to join the Seabourn fleet in 2018. The contracts with Wärtsilä for the vessels' navigation and automation systems were signed in December 2015. The engine orders were signed in late 2014 and in the third quarter of 2015.

The new RH Marine Group, formerly known as Imtech Marine was introduced at the Europort exhibition in Rotterdam today. Following the recent acquisition by Parcom Capital and Pon Holdings, Imtech Marine will now be known as RH Marine Group, built on the roots of founding companies Radio Holland and van Rietschoten & Houwens. The two ‘pillars’ for service and newbuild activities within Imtech Marine are also involved in the new naming structure. Global NavCom, Connectivity, On Board ICT service and maintenance brand Radio Holland will keep its name but will have a new logo.

Press release - The Maritime Education & Training Center (MET) has honored its 3,000th course participant. The award, in the form of a certificate and gift, was officially presented to the American electrical engineer Guillermo Medina by Michael Neumann, the technical head of the MET. Guillermo Medina had successfully completed the three-day seminar on "Marine Electronics, Engine Monitoring and Automation" for marine engineers and technicians. In addition to power management,…

Rolls-Royce has signed an order for a Live Fish Carrier. This will be the third vessel developed by Rolls-Royce for the Norwegian ship owner Sølvtrans AS, one of the world’s largest transporter of live fish. The Rolls-Royce designed vessel of type NVC 387 is to be built by the shipbuilding company Kleven at their Myklebust yard in Norway, and the contract with the yard includes an option for a second ship. The previous two vessels of similar design to Sølvtrans were built in Spain.

Transas and the Center for Simulator and Maritime Training (CSMART), the training facility for Carnival Corporation & plc, signed a multimillion euro contract to utilize Transas' simulators at CSMART's new facility, scheduled to open in summer 2016 in Almere, just outside Amsterdam. Carnival Corporation has operated its current CSMART training facility in Almere since 2009. The new CSMART facility will be three times larger than the existing facility, with capacity for providing annual training for 6,500 deck and engineering officers.

Wärtsilä Corporation is to acquire L-3 Marine Systems International from NYSE-listed L-3 Communications Holdings Inc. L-3 Marine Systems International (L-3 MSI) is a business sector within L-3’s Electronic Systems business segment primarily focused on the commercial ship industry. The transaction is valued at MEUR 285 (enterprise value), subject to customary adjustments including an estimated reduction of MEUR 60 for L-3 MSI employee pension-related liabilities to be assumed by Wärtsilä Corporation. Financing for the deal will be from existing cash resources and credit facilities.

Voith has been awarded a new contract to supply the complete electromechanical equipment for a pumped storage power plant in Thailand. The order for the extension of the Lam Ta Khong hydropower plant includes the supply of two motor-generators, two 255 MW vertical pump turbines, the automation systems as well as the electrical and mechanical balance-of-plant systems. The contract has been awarded by the Electricity Generation Authority of Thailand (EGAT) and has a total value of around €50 million. 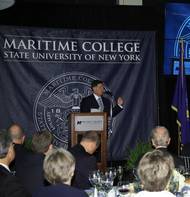 SUNY Maritime College has honored Richard Angerame, President and CEO of utiliVisor, as part of its 2014 Admiral’s Scholarship Dinner, the institution’s annual event to raise scholarship funds for outstanding current and future Maritime students. In announcing the honor, Dr. Michael Cappeto, President of the College, stated, “Over the past several years you have been extremely supportive of our efforts and we are privileged to consider you a friend of SUNY Maritime College. You…