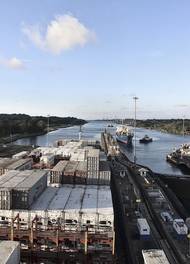 Foreign trade and energy have boosted economies throughout the Americas. From the USA, to Argentina, Ecuador and the Bahamas, Maersk is helping unleash the region’s potential by facilitating the flow of goods around the globe. With modern infrastructure and improved access to international trade, Latin America´s economic growth can be significantly improved. Investments to secure access for larger vessels in US East Coast ports are underway and required to make it viable for the New Panamax vessels to be deployed on Maersk Line’s Asia–US East Coast services.

Steady as She Goes

Ahead of the Panama Canal expansion two alliances have announced they will upsize some of their ships on the Asia-US East Coast route. How quickly will the others follow? The 9,400-teu Cosco containership Andronikos will make the first transit of the expanded Panama Canal on Sunday 26 June, and ahead of that two shipping alliances – CKHYE and G6 – have laid out their plans to upgrade the size of ships used on the Asia-US East Coast via Panama route. In November last year Container…

Major container shipping rates plummeted again this week, with declines on the trunk Shanghai-Europe routes falling at record amounts,  says Shangahi Containerised Freight Index (SCFI). A eport in ASC  says that the SCFI for Far East to North Europe dropped by a staggering 31%, losing US $143 per teu to finish the week at US $313 per teu. The rate to the Med also finished at US $313 per teu, one the first times that the southern gateways have commanded a similar freight rate to Europe’s northern ports. The Far East to Med route decline represented a drop of 30%, or US $135 per teu.

The CMA CGM Group announced the signature of three major agreements on the biggest worldwide maritime trades with China Shipping Container Lines (CSCL) and United Arab Shipping Company (UASC). Under the name of Ocean Three, the agreements; which include a combination of vessel sharings, slot exchanges and slot charters; concern the following maritime trades:  Asia-Europe, Asia-Mediterranean, Transpacific and Asia-United States East Coast. On the Asia-US East Coast trade: one service via the Suez Canal and one service dedicated to the Gulf of Mexico.