Alibaba Group Holdings and Israeli shipping group Zim have entered a strategic cooperation agreement for the direct purchase of sea freight, which will improve logistic services to merchants selling on Alibaba, Zim said on Monday.Zim said it will provide sea freight and services through a direct interface with the e-commerce giant’s logistics platform.The companies have been cooperating since earlier this year, the shipper said in a statement.Zim is 32% owned by Kenon Holdings.(Reporting by Ari Rabinovitch; Editing by Tova Cohen)

COSCO SHIPPING has signed a cooperation agreement with e-commerce company Alibaba and its FinTech affiliate Ant Financial to digitalize the shipping supply chain.The Chinese firms will research and promote the deployment of shipping blockchain in China, working to facilitate the connection of shipping, ports, logistics and finance based on the technology, and to realize data connectivity through cross chain cooperation to build a platform for systematic cooperation between the upstream and downstream industrial chains.

Underwater drones, autonomous trucks and paperless customs clearance – the future is already buzzing in the Port of Hamburg.The ‘Digital Networking’ conference run by Port of Hamburg Marketing (HHM) showed how far the port has progressed. “In respect of digitalization, the Port of Hamburg is a worldwide beacon offering many USPs,” emphasized Axel Mattern, HHM’s Joint CEO.Dr. Sebastian Saxe, CDO of Hamburg Port Authority, presented an impressive picture of the digital future in his keynote speech. The port’s rail, road and inland waterway traffic is already digitally guided.

Port of Hamburg Delegation in China

A delegation from Hamburg was in China from 14 to 18 May, visiting companies in Zhengzhou, Shanghai and Hangzhou. Organized by Port of Hamburg Marketing (HHM) in cooperation with the Hamburg Representative Office in Shanghai, the delegation’s tour was led by Axel Mattern, HHM’s Joint CEO, and Mathias Schulz, its Head of Market Development Asia. The delegation included representatives of TCO Transcargo, Rostock Port, Trelleborgs Hamn, Hamburg Port Authority (HPA) and Hamburg Invest.

A delegation from Hamburg was in China from May 14-18, visiting companies in Zhengzhou, Shanghai and Hangzhou. Organized by Port of Hamburg Marketing (HHM) in cooperation with the Hamburg Representative Office in Shanghai, the delegation’s tour was led by Axel Mattern, HHM’s Joint CEO, and Mathias Schulz, its Head of Market Development Asia.The delegation included representatives of TCO Transcargo, Rostock Port, Trelleborgs Hamn, Hamburg Port Authority (HPA) and Hamburg Invest.The focus was on discussions with leading import and export companies…

Evergreen Line has teamed up with Alibaba.com to provide Alibaba.com members with the option of booking sea freight services online with guaranteed space and prices. Evergreen Line has also appointed Evergreen Logistics Corporation as a designated provider of customized, comprehensive logistics solutions for Alibaba.com members opting for its sea freight services. The growth of e-commerce has resulted in small, fragmented orders from global buyers. Taking note of the need for user-friendly logistics services of smaller volume shippers…

Maritime Logistics Professional caught up with Frank Coles, the ubiquitous leader of Transas, fresh from his company’s user’s conference in Malta. In typical candor, Coles paints his picture of maritime and shipping’s future. With a captive audience of more than 400 clients in scenic Malta for several days earlier this year, one might be surprised when Frank Coles admits that the meeting was not all about Transas. “I wanted something completely different. I didn’t want to talk about Transas; I wanted to talk about the industry and what we can learn from aviation. 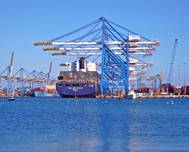 Is Container Freight Now a Commodity?

In an interview with Patrik Berglund, the Xeneta CEO says that the introduction of the "commodity" status for the container would benefit both shippers and carriers. Q- In today’s world of Amazon, Alibaba and E-commerce, have container rates (meaning 20-40’dry box) reached ’commodity’ status? Not exactly. There is a major difference between ‘cheap’ and being a ‘commodity.’ Clearly the current rates are very low, and in fact threatening the financial viability of 4-6 ocean carriers, but business cycles, as set by supply and demand, are part of the global economic cycle.

Callahan Appointed to Intelsat Board

Intelsat S.A. announced that Robert F. Callahan, Chairman of Longueview, a media, internet and technology advisory firm, was elected to the company's board of directors, effective April 1, 2014. Callahan will join as an independent member of the board and serve on the company's audit committee. "Bob's successful track record leading global media companies will make him a tremendous asset to our board," said David McGlade, chairman of the board and chief executive officer of Intelsat. Callahan, 62, brings a wealth of experience in the media, internet and technology sectors to Intelsat.