Ken Bloch Sørensen has stepped down as president and  CEO of Canadian shipowner Algoma Central Corporation after leading the company for four years. Gregg A. Ruhl, the current Chief Operating Officer, has been named President and Chief Executive Officer and will assume that role immediately.Soerensen is said to want to spend more time with his family in Europe. He joined Algoma in April 2015 and was charged with redefining the strategic focus of the Company to include growth markets beyond North America.

St. Lawrence Seaway cargo volumes are up 10 percent as the shipping season enters its busiest final months. According to The St. Lawrence Seaway Management Corporation, total cargo tonnage from March 20 to October 31 reached 28.7 million metric tons – 2.5 million metric tons more compared to the same period in 2016. “The star performers this year have been North American mined products such as iron ore and salt and high-value goods such as specialty steel imported from Europe,” said Terence Bowles, President and CEO of The St. Lawrence Seaway Management Corporation.

Canada-based Algoma Central Corporation has signed a joint venture (JV) agreement with Nova Marine Holding of Luxembourg to establish a fleet of cement carriers to supply infrastructure projects across the globe. Algoma will own 50% of the joint venture, which is to be named NovaAlgoma Cement Carriers or NACC. "We are very excited about the opportunity this investment with Nova presents," said Ken Soerensen , President and CEO of Algoma. The demand for modern efficient cement carriers continues to increase globally.

Grain shipments through the St. Lawrence Seaway are up 7 per cent this season, continuing the pace set last year when ships carried the largest volume of grain through the navigation system in 14 years. According to The St. Lawrence Seaway Management Corporation, grain shipments (including Canadian and U.S. grain) totaled 1.9 million metric tons from April 2 to May 31. The Port of Thunder Bay, the largest grain port on the Great Lakes, reported that its grain shipments were off to the strongest start this season since 1997, as the major handlers continue to export the harvest from 2014.

Dool to Serve as Chair of SLSMC Board

The St. Lawrence Seaway Management Corporation (SLSMC) announced that Tim Dool has been named as Chair of the Board of Directors, effective September 1. Dool was appointed to the Board in November of 2012, and represents domestic carriers. As the former President and CEO of Algoma Central Corporation, he brings an extensive range of marine industry experience to the boardroom table. Dool succeeds Jonathan Bamberger, who has completed a two year term as Chair of the Board. Bamberger, President of Redpath Sugar, will continue to serve as a member of the Board.

Algoma Central Corporation (Algoma) wins in its dispute with a Chinese shipyard at a London, UK, Arbitration Tribunal. The tribunal heard the shipbuilding contract dispute involving Algoma Tankers International Inc., a wholly owned subsidiary of Algoma Central Corporation, and found in its favour. In 2007 the Corporation, through its wholly owned subsidiary, entered into contracts to build three 16,500 - deadweight ton product tankers in China. Each contract contained provisions that permitted cancellation under certain conditions. 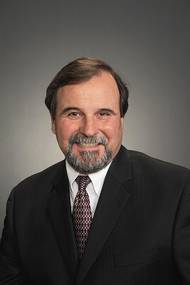 Rand Logistics, Inc. announced the hiring of Robert (Bob) Bezan for the newly created position of Vice President of Planning and Analysis at its subsidiary, Lower Lakes Towing Ltd. In this role, Bob will be responsible for all operational planning and analysis activities for the Company. Bob has spent the last 14 years at Algoma Central Corporation and Seaway Marine Transport serving in similar capacities. This position was created in response to the company’s recent fleet expansions and to enable us to capitalize on future growth opportunities.

The St. Lawrence Seaway Management Corporation (SLSMC) is pleased to announce that Mr. Georges Robichon and Mr. Tim Dool have each been appointed to its Board for a three-year term. Mr. Robichon replaced Mr. Paul Gourdeau as the international carrier representative in August, while Mr. Dool becomes the domestic carrier representative when Mr. Ian MacGregor’s term is over at the end of November. In addition, Mr. Jonathan Bamberger was named Chair of the Board of Directors effective September 1st. He is President of Redpath Sugar Ltd. and has been a member of the SLSMC’s Board since August 2010. 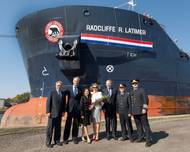 Algoma Central Corporation's 'M/V Algobay' renamed  'Radcliffe R. Latimer' in a rededication ceremony in Port Colborne. The self-unloading bulk carrier, which transports commodities such as grain, coal, iron ore and gypsum to ports around the Great Lakes, St. Lawrence Seaway and Atlantic Canada will now be called the M/V Radcliffe R. Latimer. Mr. Latimer, who recently retired from the Algoma Central Corporation board of directors, has an association with the company spanning 46 years and acted as its chairman between 2003-2010. Mr.