U.S. Coast Guard leaders and guests joined together Thursday to recognize Rear Admiral Linda Fagan and  Master Chief Petty Officer Richard "Shane" Hooker, the first Ancient Tridents, at the Ancient Trident Ceremony held at the Alexander Hamilton Custom House. "It's a proud day for the marine safety community as the Ancient Tridents Gold and Silver joins the lineage of the Ancients," said Rear Admiral Linda Fagan, the deputy commandant for operations, policy and capabilities. Among the distinguished guests in attendance were Commandant of the Coast Guard…

The Coast Guard accepted delivery of the fourth National Security Cutter, Hamilton, in Pascagoula, Mississippi, Monday. Hamilton will be the first of two NSCs to be homeported in Charleston, South Carolina. The cutter will be commissioned into service Dec. “After three years of fabrication and expert craftsmanship, Ingalls shipyard has delivered a great ship to the Coast Guard,” said Capt. Douglas Fears, the prospective commanding officer of Hamilton. The cutter is now officially an asset of the Coast Guard and custody is turned over from the shipyard to its commanding officer and crew. 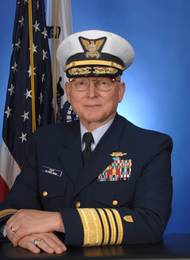 December marked the 10th anniversary of the U.S. Coast Guard’s formal entry into the national intelligence community, although many had long perceived the Coast Guard as a de facto member. The Coast Guard began its long involvement with the work of intelligence in 1790. Tariffs imposed on goods imported to the United States, in order to raise revenue, caused lawless merchants to unload their cargoes at isolated locations to avoid paying the tariffs at customs houses in ports.

1790- Secretary of the Treasury, Alexander Hamilton, submitted a bill to Congress to create a "system of cutters" to enforce tariff and customs laws along the nation's coastline.  Congress passed his bill on 4 August of the same year. 1944- Coast Guardsmen participated in the invasions of Aitape and Hollandia, Dutch New Guinea. 1965-USCG and US Navy agree on the deployment of 82-foot patrol and 40-foot utility boats to support Operation Market Time in Vietnam. (Source: USCG Historian’s Office)

1793- Alexander Hamilton, first Secretary of the Treasury, submitted to the Senate the first list of cutters with stations, officers names, rank and dates of commission. 1984-Five people died, three were injured, and 22 people rescued when the tanker American Eagle exploded 180 miles southeast of New Orleans. An AIRSTA New Orleans HH-3 took the three injured crewmen ashore while a British tanker watched over the crippled ship until a commercial tug could arrive. The new day the American Eagle started to break up and sink. The 24 remaining crewmen abandoned ship.

1799- Having existed essentially nameless for 8-1/2 years, Alexander Hamilton's "system of cutters" was referred to in legislation as "Revenue Cutters."  Some decades later, the name evolved to Revenue Cutter Service and Revenue Marine. 1940- The ocean station program was formally established on 25 January 1940 under orders from President Franklin Roosevelt. The Coast Guard, in cooperation with the U. S. Weather Service, were given responsibility for its establishment and operation.

1789-Secretary of the Treasury Alexander Hamilton asked collectors of customs to report on expediency of employing boats for the "security of the revenue against contraband."  Hamilton's interest in such vessels led to his request to Congress to fund the construction of 10 such revenue "boats" the following year, leading to the creation of what is now the U.S. Coast Guard. (Source: USCG Historian’s Office)

1791- Secretary of the Treasury Alexander Hamilton authorized an allowance of 9 cents for every ration that Revenue officers did not draw. 1922- Congress authorized officers of the Customs and of the Coast Guard to board and examine vessels, reaffirming authority to seize and secure vessels for security of the revenue under act of March 2, 1799. 1938-A hurricane hit the northeast coast, wreaking havoc among the lighthouses and the light keepers there. First assistant keeper Walter B. Eberle of the Whale Rock light was killed when his lighthouse was swept into the sea.