Røkke is CEO of Akastor ASA

Akastor ASA announced that its Board of Directors has appointed Kristian Røkke as its Chief Executive Officer. Mr. Røkke will succeed Frank O. Reite, who will take the position of Chief Financial Officer at Aker ASA. Kristian Røkke, who is currently Chairman of Aker Philadelphia Shipyard ASA (AKPS), a leading U.S. commercial shipyard, and previously President & CEO of AKPS, will assume his new position in Akastor ASA on August 10, 2015. Aker ASA will propose to the nomination committee of Akastor ASA that Frank O.

Aker Philadelphia Shipyard ASA has appointed Jan Ivar Nielsen as Chief Financial Officer effective September 2015. Since 2009, Nielsen has held the position of CFO of VARD Holdings, a publicly listed global designer and builder of offshore and specialized vessels with 10 facilities across Europe, Asia and South America. From the period 2002 to 2005, Nielsen was CFO of the shipyard in Philadelphia. In 2005, Nielsen was involved in the formation of Aker American Shipping Company, the former parent of both Aker Philadelphia Shipyard and American Shipping Company.

Aker Philadelphia Shipyard ASA announced today that its Chief Financial Officer, Jeffrey Theisen, is resigning from his position later this month to pursue other career opportunities outside of shipbuilding and shipping. Art Whittemore, who was previously CFO of Gamesa USA, a manufacturer of wind turbines, is currently serving as interim CFO of AKPS to ensure a smooth transition while a permanent successor is identified.

Aker Philadelphia Shipyard AKPS), a leading U.S. commercial shipyard constructing vessels for operation in the Jones Act market, has on July 25, 2014 purchased 1,465 shares in the Company on Oslo Axess at an average price of NOK 158.68 per share, implying a total consideration of NOK 232,466. Following the transaction, AKPS holds a total of 9,785 own shares, constituting approximately 0.08% of the Company's shares and votes. Reference is made to Aker Philadelphia Shipyard ASA's…

Aker Philadelphia Shipyard, Inc. (APSI), the wholly-owned U.S. subsidiary of Aker Philadelphia Shipyard ASA (AKPS) has released an update regarding an incident that occurred yesterday at its facility. According to Aker, numerous factually incorrect news reports have emerged, and this release was intended to clarify certain points. Aker reported that at approximately 6:50am, maintenance was being performed on the shipyard’s gantry crane when an electrical fault occurred. Following protocol, NAVSES and the Philadelphia Fire Department responded. 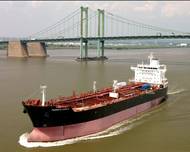 Crowley Maritime purchases two new 'Jones Act' tankers from Aker Philadelphia Shipyard. Crowley Maritime Corporation’s petroleum and chemical transportation group announce that it has purchased two new Jones Act tankers, the Pennsylvania and the Florida , from Aker Philadelphia Shipyard ASA. The tankers, scheduled for delivery in September 2012 and March 2013, mark Crowley’s re-entry into the Jones Act tanker market since its last tanker was retired in 2011. The tankers will be capable of carrying nearly 330,000 barrels of a wide variety of petroleum products and chemicals.