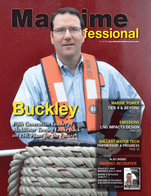 An hour spent with Margaret Kaigh Doyle is a high energy event, punctuated by her enthusiasm for everything she undertakes on a daily basis. Getting her to sit down for an hour to reflect on what she’s accomplished and from where she has come, was therefore a tall order. And, her typical day involves plenty. That’s because Doyle currently serves on the U.S. Delegation to the Sub-Committee on Human Element, Training and Watchkeeping (HTW) at the International Maritime Organization (IMO), and when she isn’t doing that, she chairs the U.S. Coast Guard Chemical Transportation Advisory Committee (CTAC) LNG Fuels Working Group.

Concurrent with all of that, her day job as Vice President – Development at the United States Resource Center (USMRC), Maritime Simulation Institute, as you might expect, takes up a little bit of time all by itself. There, she is responsible for managing and executing all aspects of program development as well as the full spectrum of marketing and fundraising efforts. This year and as always, she found herself on the leading edge of industry developments when she set up and delivered of a range of courses focusing on LNG as a marine fuel at USMRC including an LNG Bunkering PIC course, the first of its kind in the US.

A Day Job – and More …
Today, many stakeholders still know USMRC as Maritime Simulation Institute or MSI. Doyle joined the USMRC team in 2012. Doyle says unapologetically, “I still feel that we are arguably the best shop around when it comes to simulation-based operations, research and training. Our management team decided that rebranding as United States Maritime Resource Center (the actual name of the 501-C) could give us a better shot at increasing the new market opportunities, revenue streams and outside investment for our little ‘shop’ in Rhode Island. The success with LNG Bunkering has been a testament to that.”

Doyle’s 25+ years of experience on the waterfront could fill two or three careers all by itself. Nevertheless, she continues to focus her attention on new challenges – all of which typically involve betterment of the profession she loves so much. Catching up with her in October, we asked her to single out the one particular experience along the way that has impacted her career the most. Doyle responded, “I can’t point to one that trumps them all.  Early in my career, I did everything I could to get on a ship for CDI and SIRE inspections, USCG audits, shipyard visits, etc. My first role at the Chemical Carriers Association was as its Technical Secretary. When I started that job, I worked hard to learn everything I could about chemical tanker design and operations. My work at International Maritime Organization (IMO) on the ISPS Code following 9-11, the 2007 MARPOL Annex II Amendments, and now my work with U.S. Delegation to the Sub-Committee on Human Element, Training and Watchkeeping (HTW) have been my reward for learning as much as I could about the spectrum of tankers. I really enjoy working in those types of forums.”

That said, the majority of Margaret Doyle’s career has involved representing the interests of various sectors in the industry including ship owners and operators, government agencies, and salvage and firefighting organizations. Perhaps best known for her work as Executive Director of the Chemical Carriers’ Association (which later merged with INTERTANKO), for over a decade she represented over 80 percent of the world’s chemical tanker fleet at the State, Federal and International Level. Before that, she earned a degree from the US Merchant Marine Academy and two Masters Degrees from The Pennsylvania State University and George Washington University. A three-time recipient of the US Coast Guard Public Service Commendation and winner of the (2010) Outstanding Professional Achievement Award from her alma mater at Kings Point, it is honestly hard to imagine how she fit all of it in and still arrived at where she is today.

Beyond her academy training, Doyle has never been to sea in a professional capacity, but that wasn’t for lack of trying. She explained, “When I graduated in 1985, the only sailing jobs available were for AB positions. I did get a union card, but after two failed attempts at getting a third mate gig, I tried my hand at maritime consulting.” Ironically, what she does today has direct (and positive) impact on countless seafarers here and across the pond. Her work as Executive Director of the Chemical Carriers’ Association was a perfect example. Doyle adds, “At first, the job was strictly technical in nature – attending meetings at the Coast Guard on emerging vapor control regulations, OPA’90 requirements, and publishing a monthly newsletter. As I grew into the job, CCA gave me the room to strengthen the advocacy and outreach arms of the organization. By the time we merged with INTERTANKO in 2003 I had assumed the full-time role as its Executive Director, representing 80 percent of the chemical tanker tonnage worldwide.”

Women on the Waterfront
Doyle’s success speaks for itself, and her colleagues point to her accomplishments and not her gender. Still, the maritime industry – like so many other aspects of its development – tends to be late to the party when it comes for opportunities for women. We asked Doyle to look back and then give today’s  young women the benefit of her considerable experience as they contemplate a career on the waterfront. Without hesitation, Doyle responded, “That’s easy. It’s such a great industry and it has come a long way in 30 years. I would give this advice to any woman entering a male dominated field:  be a great listener, know your stuff. Always try to be the most well-read person in the room, never take yourself too seriously, but never back down if you know you are right. Beyond this, treat everyone you meet as if they are an equal; because they are.”

Apart from this, Doyle stressed the need for more women in key positions to actively seek out sways to mentor those coming along behind them. And, she says, WISTA – the Women’s International Shipping & Trading Association – where she is an active member today, is the perfect venue to that that done.

As the industry evolves, so too has Doyle’s passion for helping to shape the changes that are occurring on a daily basis on the waterfront. For example, she speaks often of providing ‘advocacy for LNG.’ “If the prognosticators are correct, in five years the U.S. will be the Saudi Arabia of natural gas. Ships calling on U.S. ports and those doing business in the U.S. will have a real need for LNG as marine fuel,” she told MarPro, adding, “The Society for Gas as a Marine Fuel (SGMF) has been established as an international organization to further this cause, but there is an incredible need to educate stakeholders in the U.S. (and Canada). As the infrastructure in areas such as Jacksonville, Tacoma and Seattle develop, we especially need an organization that will address the needs of local, state and federal players. USMRC is in discussions with a number of entities to make this a reality.”

Separately, Doyle and USMRC are developing a range of courses focusing on LNG as a marine fuel at a first-of-its-kind LNG Bunkering PIC course. But, those efforts were developed in anything but a stovepipe fashion. Instead, she insists, “We made the decision to base our course on the Knowledge, Understanding and Proficiency (KUP) elements approved at HTW -1. This will be adopted at IMO this November. Moving forward we will take any USCG Guidance into account as we head into 2015. In the end, you defer to the IMO because that eventually will be the basis of any STCW compliant course.” She continues, “The fact that we have been able to work with Harvey Gulf and provide their people with LNG Bunkering Training has proved to be icing on the cake.”

The experience of serving on both domestic and international NGO/regulatory bodies provides Doyle with additional experience and perspectives, all of which she brings back to her day job. And, as someone who interacts with professionals for myriad countries and flag states, she also knows that there is much that the United states can learn from its contemporaries across the pond – and a few things they could learn from us, as well. To that end, she contends, “The U.S. maritime industry is evolving into a much more of diverse sector with the offshore and brown water growth exponentially outpacing the deep water tonnage. I would say that, like the U.S. fleet, many of our partners across the ponds (Atlantic, Pacific, etc.) are mixing the flags of their fleets. We could all do a better job of managing risk with an approach to training specifically designed for each ship and company.”

Looking Back and Planning Ahead
At the end of the day, and like any successful professional, picking out the proudest moment of her career isn’t an easy task, but Doyle eventually told us, “I would say that involves my work on 2007 MARPOL Annex II Amendments (both at IMO and with some great folks at the U.S. Coast Guard). I am also extremely proud of the work we are doing at USMRC on LNG Bunkering training. It is a close second, but this training is still evolving.”

An hour of hearing about what Doyle has accomplished in the past – and is doing  now – is fascinating stuff, but a look back to yesterday provides a better clue as to where she is going next. As we finished up, Doyle reflected, “My step grandfather was a Chief Engineer with Royal Dutch Shell, so I guess I could point to that. But the moment I walked on the Kings Point campus I knew it was what I wanted to do. The plan B, if I didn’t go to Kings Point, was to play soccer at Tufts and major in engineering. Today, I can’t imagine my life outside the shipping industry. It’s the people who make this industry so remarkable.” She’s right. And, she remains part of that remarkable equation.

(As published in the 4Q 2014 edition of Maritime Professional - www.maritimeprofessional.com)