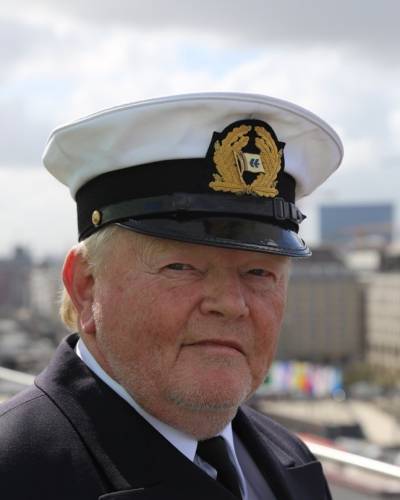 Siegfried Schmerer already dreamed of becoming a captain as a young boy. Later, as a sailor on a coaster, he suffered from seasickness. Though he thought about giving up, he stuck with it and eventually worked his way up all the way to the bridge. After half a century at sea, Captain Schmerer will sail on his last voyage this September on board the Colombo Express. In Hapag-Lloyd Insights, he takes a look back at his career, such as at the long voyages to Australia in what was then the world’s largest general cargo ship or the 20-meter-high waves near the Azores.

Sometimes you need a little distance before you notice the big changes that have taken place in his decades as a sailor. Like the development of Hong Kong, for example, which Siegfried Schmerer can see when he goes ashore and takes the funicular railway 500 meters to the top of Victoria Peak. The captain then enjoys the stillness high above the metropolis of seven million people. He first docked in the former Crown Colony back in the 1970s on board the Mosel Express. Less than half the number of people lived here back then and there were only two gantry cranes the first time he docked in Hong Kong, and his 1,100-TEU ship was moored here for three days. Today, it’s often just a matter of hours.

In September, Siegfried Schmerer will board a container ship as a captain for the last time. He will then sail the Colombo Express (8,750 TEU) across the Atlantic from New York to Hamburg, where he will leave the bridge forever. When that happens, his long career as a captain will end exactly where it had once started as a young sailor.

Globalization, containerization, the rapid growth of Asia: the 65-year old experienced all of this first-hand on board his ships – during 49 years of seafaring that are now coming to an end. In a career spanning almost five decades – from small coasters to the container giants of today, from break-bulk cargo to steel containers, which are 60 years old this year – he overcame the challenges that confronted him. Stormy weather, serious engine damage on the open sea, long voyages across vast oceans: in a decade and a half as captain, he always brought his ship, crew and cargo safely into port. He was helped here by his humility, a dry sense of humor and a seemingly unshakable calm.

Like many others, it was a fascination with the role of captain that drew Schmerer to seafaring. As a small boy, he had browsed through the German Kehrwieder (Recur home) shipping magazine, which was available in his home town far away from the sea. In a little less than 25 years, he worked his way right up the bridge. Rope splicing, rowing, the meaning of flags and how a compass works – the 16-year-old learned all of this at the nautical school in Hamburg-Blankenese. To obtain his seaman’s certificate, he made his first journey on board the coaster Nanna, with 399 gross registered tons. Eight men on board, back and forth across the North and Baltic Seas, for 20 months. And one of them was plagued by seasickness: Siegfried Schmerer. “I wanted to give up, but my parents said to me: You’re going to see this through to the end.”

Schmerer listened to his parents – and applied to Hapag in 1969. He continued to get seasick from time to time, but hasn’t had any problems with it for 20 years. As an ordinary seaman, he travelled to Australia on board the Dresden, the world’s biggest bulk carrier at the time, with 32 derricks. He was the first in the family to visit his mother’s cousin there. The Dresden docked in Melbourne for two weeks.

In 2000, he captained his first ship, the Bonn Express, with 2,803 TEU – as was the case for many Hapag-Lloyd captains. He was given command of a further five vessels. “I was always lucky with my crews,” says Schmerer, looking back. The captain always spent a long time on board ‘his’ ship – some six years on the Shanghai Express as it was called back then (now the Yantian Express): “You get to know your way around, every ship is different. Anyone can travel in a straight line, but when it comes to manoeuvring, experience helps.” This experience paid off, for example, when the captain brought his engine damaged container ship from the Pacific, through the Panama Canal, across the Atlantic, and safely home to Bremerhaven.

The biggest change, says Schmerer, is today’s weather navigation. “We used to sail out with little idea of what to expect.” He experienced 20-meter waves on board a 135-meter freighter in 1978 in the Azores, which lasted for a day and a half. “You don’t feel good in that situation, but there’s no time to think about it. And you can even sleep.” Today, he sails around storms like that. Thanks to technology, he knows days in advance where it’s going to be stormy. “I’m punctual down to the last five minutes, as scheduled by the liner service – like a bus driver.”

Of course, there’s a certain sense of nostalgia for Schmerer when he remembers the days before there was air conditioning on board. At sea, the crew often hunkered down on deck until late into the night because it was simply too hot in the cabins. “Once a week, we sang sea shanties.” Or sat on the hatch and watched films. A bed sheet served as a screen, while the ship sailed through the night across some southern sea. On one occasion in Casablanca, they were docked for so long that they saw the sugar which the ship had brought on sale in the bazaar.

And today? There are a few things that Schmerer knows he won’t miss. Filling out forms, for example. Or the constant noises on board. For a seaman, especially one as experienced as the 65-year-old, it is only very rarely quiet on a ship. He hears every noise, and always asks himself: does that sound right, is everything running smoothly? Some sounds, says Schmerer, “stay with you in your pillow at night time and you can’t get rid of them.”

When asked about his last voyage, about the last time he will serve as the captain of a huge containership, Schmerer says he prefers not to think about it too much. However, he will admit to being a bit afraid that his crew might just be planning something for his send-off. “And I’ll probably have a big lump in my throat when I go down the gangway for the last time,” he adds.

However, Captain Schmerer is certain of one thing: “I’ll bring this journey to a safe and steady end – just like all the others before.” And he might even go on a cruise some time, for the sake of his wife. Even if there aren’t many ports in the world that he hasn’t sailed to.