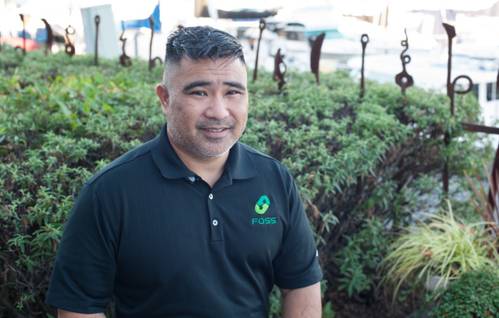 In 2002, Nakama was promoted to Lieutenant, and was integrated into the permanent active duty corps. For the next two years, he served at the Atlantic Area Marine Safety Division’s Marine Environmental Response Branch.

“I assisted in the creation and management of the Coast Guard’s Redeployment Assistance & Inspection Detachment, a program responsible for hazardous material inspections in the Middle East in support of Operation Iraqi Freedom,” he said.

Also, Nakama assisted in the management of the region’s Incident Management Assist Team, a deployable-ready cadre that provides emergency support during national-level incidents.

In June of 2004, Nakama was transferred to the Marine Safety Office in Juneau, Alaska, and served as the Chief of the Marine Environmental Protection Branch, and then later as the Assistant Chief of Port Operations. He was responsible for 250 environmental compliance inspections of Federally regulated fixed and mobile bulk oil maritime facilities, and the regulatory permitting of more than 40 million pounds a year of commercial explosives and other hazardous materials destined for Alaska’s mining operations.

“I also oversaw response operations of any oil spilled or chemical released which occurred on any navigable waterway throughout Juneau and its neighboring ports in southeast Alaska,” he said.

Still in Alaska, Nakama was selected for temporary duty as the Deputy Operations Section Chief at the Area Field Office in New Orleans during Hurricane Katrina’s recovery phase.

“My duties often took me to Plaquemines Parish, the area where the hurricane made landfall,” he said. “Not a single structure remained. Any trees that ‘survived’ were stripped of all their leaves and small branches. No grass, weeds, or other greenery remained, only dirt and sand. I was granted authorized access to the Ninth Ward, the location of the infamous levee breach. Houses were moved off their foundations. Upon viewing the interiors of a few of these homes, I saw severe water damage to people’s personal belongings, and the dirt lines on walls left by the flood, which in effect were telling a story of lost family memories and lives.”

In 2008, he was transferred to Sector Honolulu to fill a temporary position as Deputy Chief of the Logistics Department until his eventual internal rise to Chief of the Contingency Planning & Reserve Force Readiness Staff.

“I spearheaded the contingency planning of all events under Sector Honolulu’s area of responsibility: Presidential holiday visits, hurricane and tsunami events, and preparedness exercises with federal, state and local agencies and various maritime port companies, including Young Brothers,” he explained.

In 2010, Nakama was called to temporary duty at Coast Guard Headquarters in Washington D.C. to temporarily serve under the National Incident Commander in the Interagency Solutions Group during Deepwater Horizon. In 2011, he was assigned as the Director of Auxiliary for the Fourteenth U.S. Coast Guard District, responsible for the operational and mission support management of more than 400 Auxiliary members throughout Hawaii, Guam, Saipan, and American Samoa.

“I was directly responsible for ensuring members were deployable-ready and Auxiliary air and sea assets were operationally capable through certification and qualification programs,” he said.

In 2012, Nakama was temporarily recalled to New Orleans to serve as Planning Section Chief for response operations stemming from Hurricane Isaac.

“I was able to return to New Orleans several times in 2014 and 2015 as well,” he said. “Each time, I could remember what it was like just after Hurricane Katrina. To see the city rebuilt, the streets crowded with laughter and good times made me feel good. I’ve even returned to a few of the neighborhoods just outside of the city limits where there were seas of blue roofs and temporary RV parks. It was great to see repaired homes occupied again.”

He was later transferred back to Coast Guard Headquarters to serve as Team Lead for one of its Exercise Support Teams – groups responsible for designing and facilitating exercises for Coast Guard units. After 26 years, he retired, and arrived in Seattle in February of 2016.

Nakama’s education includes a Bachelor’s Degree in Business Administration, and Master’s Degrees in both Quality Systems Management and Health Science, with a specialization in Emergency and Disaster Management. He is also a certified Type 2 Planning Section Chief, and a Type 3 Incident Commander under the Incident Command System. Nakama became certified as a Master Exercise Practitioner in 2011 under the direction of the U.S. Department of Homeland Security’s Emergency Management Institute. In 2015, he became a Certified Emergency Manager from the International Association of Emergency Managers.

Nakama’s other responsibilities include maintaining the response readiness of Foss employees through the conduct of drills and exercises, which often include participation from the U.S. Coast Guard and state oil spill prevention regulatory agencies.

“What I really like most about my position is the continual learning of regulatory requirements from an industry perspective,” he said. “I’m now on the ‘other side’ of the table. My greatest challenge has been the transition from a military organization which I was intimately familiar with to starting a new career with a company which has its own policies, procedures and staff.”

Nakama has spent the past weeks creating new training modules for personnel, with duties relating to spill prevention and response, and the responsibilities of the company’s Incident Command System.

“I’ve made it my quest to meet as many fellow employees as possible, the regions they work in, and to learn about their unique operational environments and design training appropriate to their respective areas,” he said.

The one thing Nakama would change about his past is the fact that his formal education got off to a slower start.

“I’m most proud of earning two Master’s degrees,” he said. “I’m the only one from both parents’ families to have attained such an accomplishment. I would have liked to have studied harder in high school for better grades so that I would’ve had the opportunity to attend the U.S. Coast Guard Academy.”

Nakama’s wife is also from Hawaii, and the couple have an adult daughter, who lives on Oahu, and two sons attending school.

“We’re adapting well to the rain and the winters (in Seattle),” Nakama laughed. “I think our duty station in Juneau helped.”

Since retiring, Nakama hasn’t had much time for another passion of his: soccer.

“I’ve been playing soccer since high school,” he said. “While on active duty, I was able to play soccer competitively and recreationally. Since retiring, I haven’t had the time or opportunity to play soccer, and hope to find a league soon. Retirement has added 20 pounds to my weight.”

His plans for the future, he said, are simple: “to help my Foss Maritime family make our company an admirable leader in maritime service to the nation.”