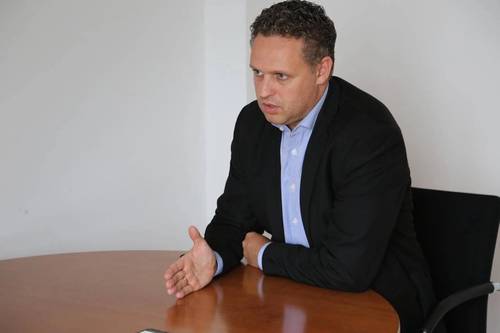 Heiko Hoffmann has been Senior Director Investor Relations at Hapag-Lloyd since September 1, 2017. He came from Hamburger Hafen und Logistik Aktiengesellschaft (HHLA), the operator of three container terminals in the Port of Hamburg, where he had been the head of Investor Relations since 2014. Prior to that, he had been in charge of M&A activities at HHLA.

Last month, Hapag-Lloyd completed the capital increase with gross proceeds of approximately €352 million (approximately $414 million) from the issuance of 11.7 million new no-par value shares. Hoffmann explains why Hapag-Lloyd did it and what’s the point of it all.

The subscription period for the shareholders started on October 2, the capital increase was completed on October 17. “We are pleased about the high level of demand for our shares,” said Rolf Habben Jansen, CEO of Hapag-Lloyd AG, following the successful completion of the capital increase. “We would like to thank all our shareholders for their confidence. We see this as an encouragement to continue to rigorously pursue our strategic and operative objectives.”

The capital increase had been agreed upon when Hapag-Lloyd and UASC decided to combine their businesses. The merger took place on May 24, 2017. The shareholders approved new authorized share capital for a capital increase on May 20, 2017 at the Annual General Meeting.

As part of its merger with UASC, Hapag-Lloyd announced that there would be a capital increase – one that has now become a reality. What does this term really signify?
A capital increase is basically about strengthening the equity of a company. To do this, the company issues new shares to shareholders. Then, the money brought in from doing so is used either to finance strategic or operative goals or to pay down debts. In our case, the focus is clearly on the latter.

Was there a risk that Hapag-Lloyd will be stuck holding some of the new shares it had hoped to sell?
No, there’s no risk of that in our case. Important major shareholders have committed to subscribing for all the shares, if necessary – that is, to acquire the new shares not acquired by other shareholders. Through this so-called “backstop commitment,” the capital increase is completely safeguarded should the shares not be subscribed for on the open market.

How much did the new shares cost?
The subscription price was be €30, which was slightly below the most recent trading price on the stock exchange.

How have Hapag-Lloyd shares been performing in recent months? And what explains this performance?
Since the IPO in November 2015, our shares have almost doubled in value. The sharp rise in share price since the beginning of 2017 mirrors positive developments on the market as a whole. In addition, many investors have come to assume that the companies in container shipping are no longer simply eyeing size and market share, but are also trying to sustainably earn money again. As regards us, Hapag-Lloyd has also been specifically recognized for the active role we have assumed in the market’s consolidation through our acquisitions of CSAV and UASC. On top of that, we are very active when it comes to our measures related to optimizing cost structure and improving revenue quality.

Do you think there’s any chance our share price could go even higher, or has it maxed out for the moment?
Share-price performance is primarily tied to earning prospects. It’s up to all of us to demonstrate that we can boost our results even higher. By now, we can prove that the synergies and cost reductions expected from the merger with CSAV have really been achieved. That makes investors optimistic that it will also work with UASC. Depending on how these expectations are fulfilled going forward, and provided that the market environment remains as stable as it recently has been, analysts believe there is also potential for further increases in share price.