An Act to facilitate swift and efficient movement of goods in India in relation to export/ import or coastal cargo is set to be enacted soon. It promises to bring transparency in trade practices by publishing of tariff by shipping transport logistics service providers in respect of services rendered. It will also assigns responsibility and obligations of service providers and service users for regulation of their conduct. A Dispute Settlement Tribunal will be constituted for redressing grievances.
Informing about this development Samuel Darse, Deputy Director of Shipping, government of India stated that as yet there have not been any regulations in place for authorities to exercise control over various prevalent unfair practices and unjustified charges being raised by service providers on importers and shippers and agents.
Now concerned about the rampant malpractices in the shipping and allied trade the government is determined to bring in legislation to curtail unfair charges being raised on importers and shippers for practices.
There are repeated complaints of service providers involved in the import and export trade (EXIM) in India raising dubious and unwarranted charges under one pretext or another. Often for the same service, bills are raised more than once under different heads by shipping companies, or their agents, freight forwarders, custom house agents, etc., and importers are being forced to cough up hefty sum. The Shipping Trade Practices bill which has been referred to the various concerned ministries will be placed before parliament.
An official from the Ministry of Shipping stated, “With no regulations the authorities have been powerless in curtailing such malpractices and consumers could not seek redressal for their grievances. All transactions are carried out by way of contract without finalizing considerations in real terms. As the intermediaries in the transportation chain are numerous and unregulated there has been a constant demand by shippers – importers and exporters for regulating the freight forwarders, cargo consolidators, shipping agents and others in the chain of transport to facilitate exports.
“The main grievance of the importers and exporters has been the arbitrary charges raised and also of being over charged in many cases by the service providers. They have also pointed out that shipping lines often come up with newer charges in a non-transparent manner. The nomenclature used is also not homogenous. Presently the authorities do not have any legal instrument under which such practices can be regulated. Hence, we hope to bring in a legal mechanism to put a check on this phenomenon.”
The Shipping Trade Practices which is scheduled to be placed before Parliament soon will make each service provider responsible for the charges he raises once the bill is passed. All service providers will have to operate strictly within this frame work. Tribunals will be established at various important centers of the country vested with authority to ensure smooth movement of the goods and to clear up any cases of delays that are brought to their notice; settle disputes; decide on issues of false expenditure; nonconformity; etc.
When the Act comes into force all service providers will have to register themselves with the Director General of Shipping. Registration will be granted only to Indian citizens or companies established in India.
The obligations of the concerned parties are clearly demarcated in the Act. The service provider’s obligation extends from the time he receives the goods for carriage and ends when the goods are delivered as per the contract or as required by the service user. If the law or regulations of the place of receipt require the goods to be handed over to an authority or to other third party from which the service provider is required to collect the goods, the period of responsibility of the service provider begins when the service provider collects the goods from such authority or other third party.
The service provider is responsible for proper and careful receipt of goods, its loading, handling, stowage, transport, protection during custody and unloading and subsequent delivery. However, the service provider, during the period of his responsibility, may decline to receive or to load them, and may take such other measures as are reasonable, including unloading, destroying, or rendering goods harmless, if the goods are, or reasonably appear likely to become an actual danger to persons, property or the environment.
Persons contravening any of the provision of the Act or fails to comply with any provision are liable to be fined heavily or jailed or both. 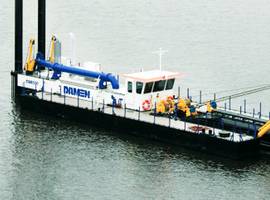