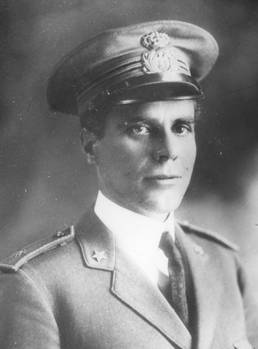 Umberto Nobile (1885-1978) was an Italian aviator and Arctic explorer.  He designed and built leading-edge semi-rigid airships.  He is remembered today for two of his creations: the airships Norge and Italia.  In 1925, Roald Amundsen, the Norwegian polar explorer, approached Nobile concerning the possibility of a flight to the North Pole.  Nobile had recently launched the airship N-1, which could be adapted for the pioneering flight.  Amundsen and Nobile renamed the airship Norge.  The airship was taken from Rome to Svalbard via several intermediate stops.  On May 11, 1926, it departed, with Nobile serving as pilot and Amundsen serving as expedition leader.  The next day, the Norge overflew the North Pole and continued, landing in Alaska on May 14.  Nobile was celebrated as a hero; Amundsen added to his already considerable fame.  The two men had a falling out, largely due to each of their national governments bragging as to which of the two men had made the greater achievement.  Nobile soon built a new and improved airship, the Italia, for another assault on the North Pole.  This time, plans called for a departure from and a return to Svalbard, continuing on to Alaska only if required by weather conditions.  The flight commenced on May 23, 1928, just over two years after the first one.  The expedition reached the Pole on May 24 and headed for Svalbard.  The next day, the Italia encountered a fierce Arctic storm.  After hours of maneuvering in strong winds and freezing temperatures, the airship crashed onto the pack ice about 20 miles north of Svalbard.  The gondola of the airship was severely damaged and ten of the 16 men on board (including Nobile) were thrown onto the ice.  The other six expedition members were trapped in the gondola as the now-lightened airship rose rapidly and without control into the sky.  Tragically, the airship and its passengers were never found.  Of the ten men on the ice, one died on impact and several others were injured, including Nobile, who suffered a broken arm, a broken leg, and a broken rib.  The tent carried by the expedition was painted red to make it easier for searchers to spot.  After a few days, three of the survivors volunteered to attempt a hike over the ice to Svalbard.  One of the three died en route.  The other two were picked up by a Soviet icebreaker.  Word of the crash led to the first international search and rescue mission in the Arctic, with participants from Russia, Norway (including Amundsen), Sweden, Finland, and Italy.  Among the various rescue efforts, Amundsen and others departed in a flying boat from Tromsø.  The airplane crashed and Amundsen’s body was never found (Keith Henderson, a fellow blogger, reports that Amundsen’s airplane may have recently been located).  After a month, another rescue plane found the survivors and landed on the ice.  The plane could only take one passenger, so the injured Nobile was airlifted to the rescue base camp.  The last five survivors were rescued by the Soviet icebreaker.  Nobile was later criticized for his handling of the expedition, particularly by the fascist government of Italy, with which he was on very bad terms.  In 1969, a Soviet-Italian film based on the Italia expedition, called The Red Tent, was released, starring Peter Finch as Nobile and Sean Connery as Amundsen.