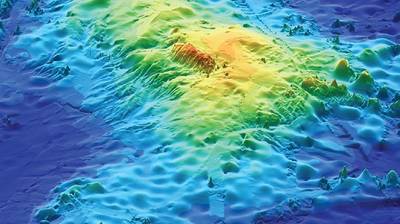 In the northwestern Pacific Ocean about 1,000 miles east of Japan lies the Shatsky Rise, an elevated portion of the seabed that covers an area the size of California.  It was from the aircraft carrier USS Hornet that Doolittle’s Raiders were launched on 18 April 1942 in waters above the Rise.  Extensive research by a team led by William Sager, a marine geophysicist from the Department of Earth and Atmospheric Sciences at the University of Houston, has concluded that the massive structure near the center of the Rise is a single, extinct volcano.  He has named the volcano “Tamu Massif”.  Tamu is an abbreviation for Texas A&M University, where Professor Sager was teaching when he began researching the structure in 1993.  Massif is a French word meaning massive and is commonly used in reference to large mountains.  The summit of the Tamu Massif is at a depth of 6,500 feet below the surface and the base on the seafloor is at a depth of 21,000 feet.  It covers an area of more than 100,000 square miles, making it approximately the size of the British Isles.  As such, it is approximately ten times larger than Mauna Loa, the next largest volcano on Earth and about half the size of Olympus Mons, the massive volcano on Mars that holds the current record as the largest volcano in the solar system.  The basalt comprising Tamu Massif appears to be relatively uniform, indicating that it formed from one source, rather than from a number of eruptions from separate volcanos.  It formed approximately 145 million years ago (during the Late Jurassic period), probably killing numerous plesiosaurs during its few million years of underwater eruptions, as well as polluting the atmosphere (without a permit).  Professor Sager plans further expeditions to the area to measure the magnetic properties of the basalt. 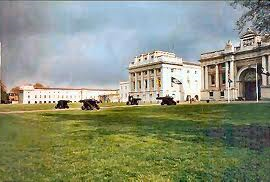