A recent conference held brought into focus the opportunities existing for private investors. 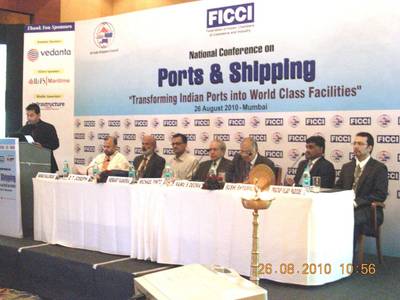 The National Conference on Ports & Shipping of the Federation of Indian Chambers of Commerce & Industry (FICCI) took note of the private investment that has been driving an unprecedented development both in the major and non-major ports of India. With this background the tremendous prospects and opportunities that exist for private investors took centre stage at the FICCI seminar held on 26 August 2010 under the theme “Transforming Indian Ports into World Class Facilities”.
Industrialists, investors, infrastructure developers, bankers, port operators and host of other who having playing a prominent role in on-going growth of Indian ports packed the large auditorium of the Hotel International – The Lalit to capacity, keenly desirous of networking and interacting with the various agencies and government officials who attended the programme.
“Indian government has played a crucial role in encouraging private investors into the various sectors of port development and operations,” pointed out Mr. Hemant Kanoria, Chairman of the Federation of Indian Chambers of Commerce and Industry in his address. “Model concessional agreement has been put in place to encourage such private investment,” he said. “The government of India expects the private sector to invest around $ 7.8 billion to develop major ports and $ 6.5 billion for non-major ports in the eleventh five year plan period (2007-2012).”
Mr. Michael Pinto, former Shipping Secretary to the Government of India and Chairman of the Conference Organizing Committee contended that in any given year government’s investment will not be more than 35% to 40% hence the rest has to come from the private investors. But then there is the upfront fixation of tariff. So how does one get around this? He observed that pre-liberalization ports grew at 2% but in the post –liberalization period the growth shot up to 7%.
During the seminar the organizers released the FICCI – Ernst & Young Report on “The Indian Ports and Shipping Sector: Breaking boundaries tapping potential”. Mr. Sushi Shyamal, Partner of Ernst & Young Pvt. Ltd. who gave a synopsis of the report said that the port and shipping sector was seeing the emergence of new major investors who attempted to capture the opportunities and further looked to enhancing their investment. “There is huge growth taking place but most of this growth is happening because of the contributions made by minor ports and because of the investment being made in the infrastructure in and around green field ports by private investments,” he said. “Nearly 150 projects are under approval or have been approved.”
He noted that major contributor to this sector was Gujarat and their growth rate too was the highest. The contribution of non-major ports (viz. minor ports) was twice that of the major ports. This clearly indicates the huge opportunity for private investment.
“We have seen large conglomerates and parties too coming in. In the last three years we have seen Private Equity having entered this field which did not happen before. These investors are targeting green field projects thus indicating that the entire value chain is well covered and there is lot of opportunities which investors could derive. We also see the entry of new conglomerates, which were never there before. The investment will continue coming in because we need bigger and deeper ports to meet the growing demand.”
In conclusion deliberations were also held on three fronts: Policy & legal Framework for Ports & Shipping Industry; Investment Opportunities in Port Infrastructure Development; and Sharing and Assessment of Experience to Shape Future Growth. These helped to provide a deeper insight and understanding of the prospects for the various players wishing to clinch a share of the growing pie.

Seattle Shipyard Takeover is a Pointer for 2011 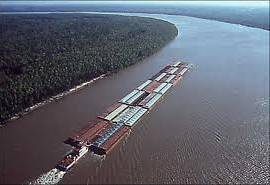