On Tuesday, September 14, I attended the Seattle Propeller Club luncheon featuring Efthimios Mitropoulos, Secretary General of the IMO. The Secretary General talked about the three main areas the IMO is focusing on right now: 2010, The Year of the Seafarer; The effort to reduce ship emissions; and piracy. 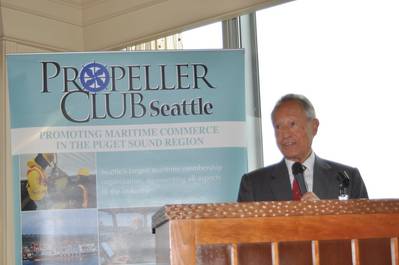 To put the work of mariners in perspective, the Secretary General pointed out that while the world’s population is somewhere around 6.5 billion, and waterborne shipping moves 90% of all trade for that population, there are only about 1.5 million mariners in the world to service that trade. Mr. Mitropoulos urged everyone in the room to help publicize the importance of these mariners and promote their welfare. Specifically he asked governmental factions to welcome foreign mariners, who have been at sea for months at a time, when they come to U.S. ports, and find a way to show these mariners hospitality while meeting security requirements.

Just before the Secretary General spoke, Father Tony Haycock told the audience about how the Seaman Church Institute had just helped a foreign mariner, whose ship was in the Port of Seattle, view his new born child for the first time using online video conferencing in their offices.

In regards to emissions, the Secretary General said that, although shipping carries 90% of world trade, it makes up only about 3% of the green house gases blamed for causing global warming (according to 2007 data). Never the less, he said, shipping must do its part and aggressively reduce its emissions.

As we sat in the Harbor Club Seattle with a view of the serene waters of the Puget Sound, waiting for our lunch to be served, the Secretary General pointed out that about 400 seafarers are currently being held hostage by pirates. He said the solution to the problem is a political one that must be solved on land and address the lawless state of Somalia. In the mean time, however, he said the IMO was doing all it could to promote mariner safety and called on the audience to stay cognizant of the suffering of mariner hostages.

My congratulations to the organizers for pulling off a smooth event and giving us all such a great opportunity to hear Mr. Mitropoulos speak.

Darwin Sets Sail: Survival of the Fittest for Ocean Shipping

Is Maritime Security too Important to be Left to Professionals? 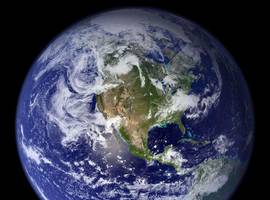