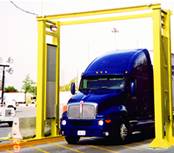 Radiation portal monitors (RPMs) are sophisticated technological devices intended to detect ionizing radiation in containers and other objects.  They are commonly used by the US Customs and Border Protection (CBP) and other governmental organizations to screen for nuclear material being smuggled through ports of entry.  Because RPMs are passive detection devices, they are considered safe for individuals in their vicinity.  They have been installed in approximately 300 US ports of entry.  Most RPMs are stationary units, where a truck hauls the container or other object at slow speed (approximately three miles-per-hour) between the detection pillars.  Mobile RPMs can be used in locations where there is not sufficient traffic to justify a fixed facility.  First-generation RPMs generally use poly-vinyl toluene (PVT) scintillators to measure the gamma radiation emanating from the object.  A graphic profile of any radiation reading is produced and if the profile suggests the presence of radioactive material, an alarm is sounded.  The PVT RPMs are very sensitive to gamma rays, possibly too sensitive.  They are unable to distinguish between gamma rays coming from nuclear material and gamma rays being emitted by benign sources, such as fertilizer, ceramic tiles, kitty litter, road salt, and television monitors.  Medical radionuclides present a particular problem as they consist of small quantities of nuclear material.  False positives or nuisance alarms constitute over 99% of all alarms from PVT RPMs.

On-Line exams for Certificates of Competency