Posted to Maritime Musings (byDennis Bryant) on May 30, 2014

One of the world’s greatest maritime museums 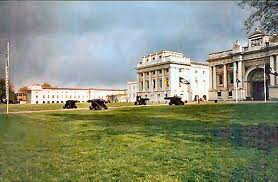 The UK’s National Maritime Museum in Greenwich was authorized by the National Maritime Act of 1934 and formally opened by King George VI and Princess Elizabeth on 27 April 1937.  It is situated in the Greenwich Royal Park in buildings formally occupied by the Royal Hospital School and is adjacent to Royal Observatory.  The museum houses the world’s largest maritime historical reference library, including over 100,000 books, 20,000 pamphlets, 20,000 bound periodicals, with over 8,000 rare books dating back to 1474.  In 2012, the National Maritime Museum was combined with the Royal Observatory, the Queen’s House, and Cutty Sark to form the Royal Museums Greenwich, which has also been designated a World Heritage Site.  Original research at the Royal Observatory formed the foundation for establishment of the Prime Meridian and Greenwich Mean Time (GMT).  The Queen’s House was constructed in 1616-19 for Queen Anne, the wife of King James I. It was designed by Inigo Jones and was the first consciously classical building to have been constructed in Britain.  Cutty Sark is a British clipper ship (launched 1869).  It was one of the last tea clippers, employed initially in rushing Chinese tea to the British market.  The ship was badly damaged in a 2007 fire, but has since been restored and reopened to the public.  The museum houses some of the finest maritime art, particularly from Britain and the Netherlands.  It also holds numerous old charts, ship plans, Master’s Certificates, and Merchant Navy Crew Lists.  The collection is open to the public for nautical and historical research.  The museum also hosts special exhibitions on a temporary and rotating basis.