It probably won't impact anyone's operations much, but I couldn't pass it up: NASA reported that the Chilean earthquake may have shortened Earth days. We might be short a couple microseconds each day to get our work done now. (This view of Earth comes from NASA's Moderate Resolution Imaging Spectroradiometer aboard the Terra satellite.) 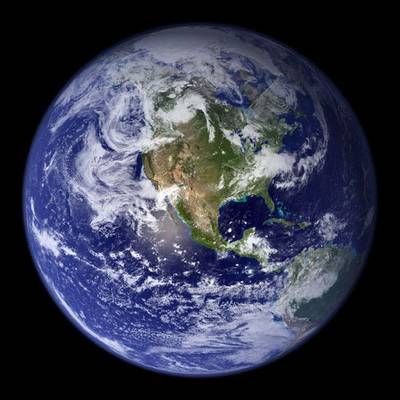 According to a report from NASA, the Feb. 27 magnitude 8.8 earthquake in Chile may have shortened the length of each Earth day:

JPL research scientist Richard Gross computed how Earth's rotation should have changed as a result of the Feb. 27 quake. Using a complex model, he and fellow scientists came up with a preliminary calculation that the quake should have shortened the length of an Earth day by about 1.26 microseconds (a microsecond is one millionth of a second).

Perhaps more impressive is how much the quake shifted Earth's axis. Gross calculates the quake should have moved Earth's figure axis (the axis about which Earth's mass is balanced) by 2.7 milliarcseconds (about 8 centimeters, or 3 inches). Earth’s figure axis is not the same as its north-south axis; they are offset by about 10 meters (about 33 feet).

By comparison, Gross said the same model estimated the 2004 magnitude 9.1 Sumatran earthquake should have shortened the length of day by 6.8 microseconds and shifted Earth's axis by 2.32 milliarcseconds (about 7 centimeters, or 2.76 inches).