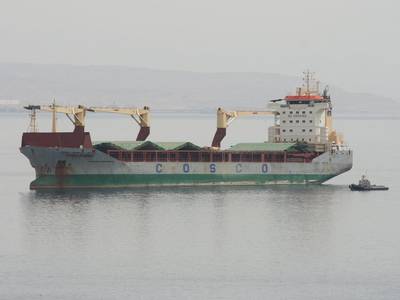 The motor vessel Yong Sheng is a nondescript geared general cargo vessel.  Built in 2002 as the Dina-C, it has a gross tonnage of 14,357 and a deadweight tonnage of 19,150.  It has been owned and operated by COSCO Group of China since 2006 and is registered in Hong Kong.  On 8 August 2013, it departed Dalian, China with a load of steel and heavy equipment in its hold and a number of shipping containers on its main deck.  Its destination was Rotterdam.  Nothing unusual so far, as Europe is China’s biggest trading partner.  What made this voyage historic is that the Yong Sheng made the voyage via the Northern Sea Route (also known as the Northeast Passage) in the Arctic Ocean along the northern coast of Russia.  Only one other Chinese ship has transited the Northern Sea Route, the research icebreaker Xue Long, in 2012.  The Yong Sheng, though, is not ice-strengthened.  In 2010, only four commercial vessels transited the NSR.  The number rose to 46 ships in 2012.  This year, Russian authorities have issued 393 permits.  The voyage from Dalian to Rotterdam takes an average of 48 days via the traditional route (10,500 nautical miles in length) through the Indian Ocean and the Suez Canal.  Via the NSR, the 8,100 nautical mile voyage is estimated to take 35 days, ice permitting.  Ice remains the great unpredictable element.  While ice coverage in the Arctic Ocean in the summer has been declining at a fairly steady pace for the past 20 years, each year is different.  In addition, just because most of the NSR may be ice-free, that does not mean that the entire route is ice-free.  Thus, an icebreaker escort may be necessary for a portion of the transit for any commercial vessel attempting the passage.  As climate change continues, the length of time that the NSR is expected to be available to commercial traffic will increase.  China fully expects to be a major user of the NSR in the near future.  It refers to itself as a near-Arctic state and recently was accorded permanent observer status by the Arctic Council.